Washington, D.C, June 21 - On Friday, a large crowd of Iranian-Americans gathered in Washington, D.C., in front of the U.S. State Department, to support the uprising of the Iranian people and their desire for regime change in their country.

Also attending the event were several distinguished American politicians who emphasized the need for the international community and western governments to adopt a firm policy toward the regime of Iran. The participants voiced their support for the National Council of Resistance of Iran (NCRI) and the People’s Mojahedin Organization of Iran (PMOI/MEK), the main opposition and democratic alternative to the tyrannical rule of Tehran’s mullahs.

The rally was held on the 38th anniversary of the Iranian regime’s crackdown on a massive 500,000-strong demonstration in Tehran, which marked the beginning of an era of brutal repression against opposition forces. Since then, the mullahs’ regime has executed more than 120,000 members and supporters of the Iranian Resistance. 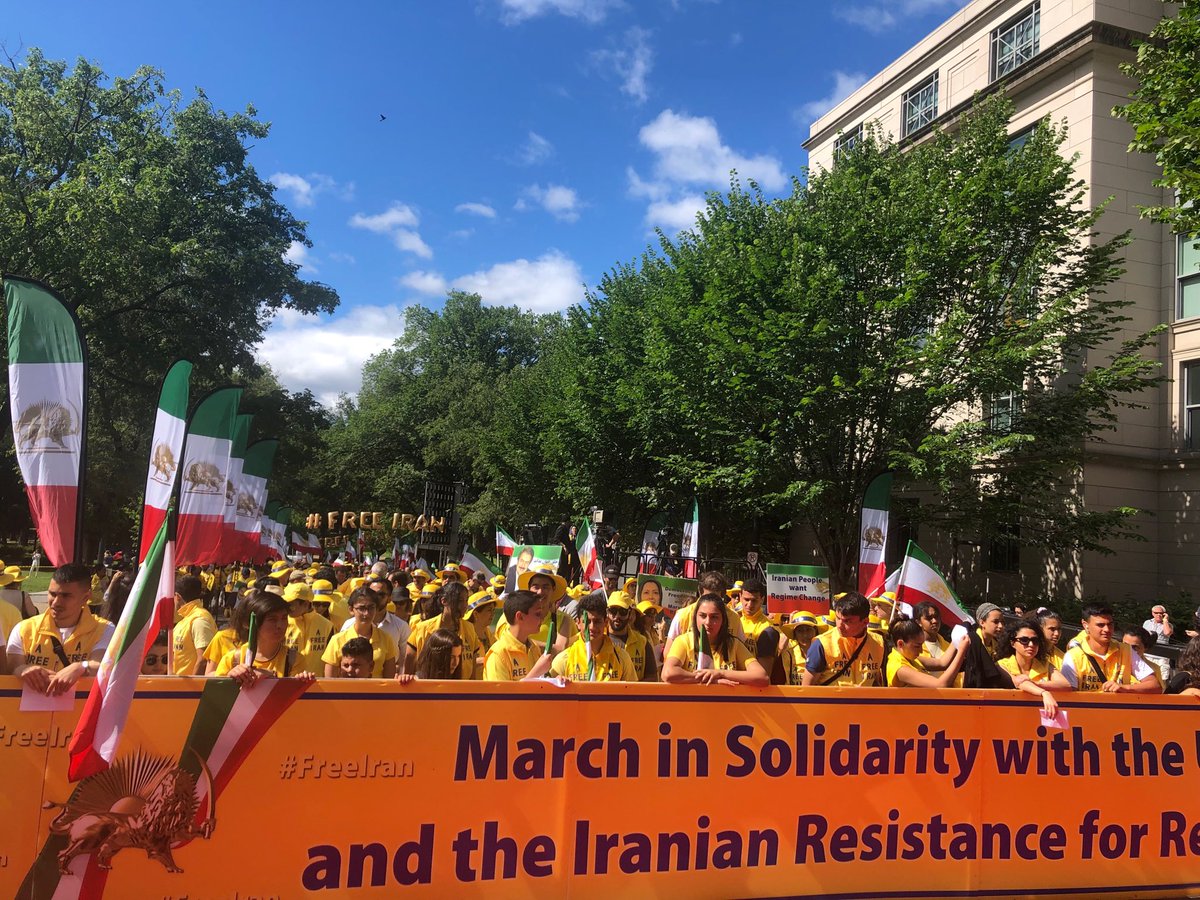 Members of the Iranian Diaspora in the U.S. rallying in Washington in support of popular protests and uprising across Iran 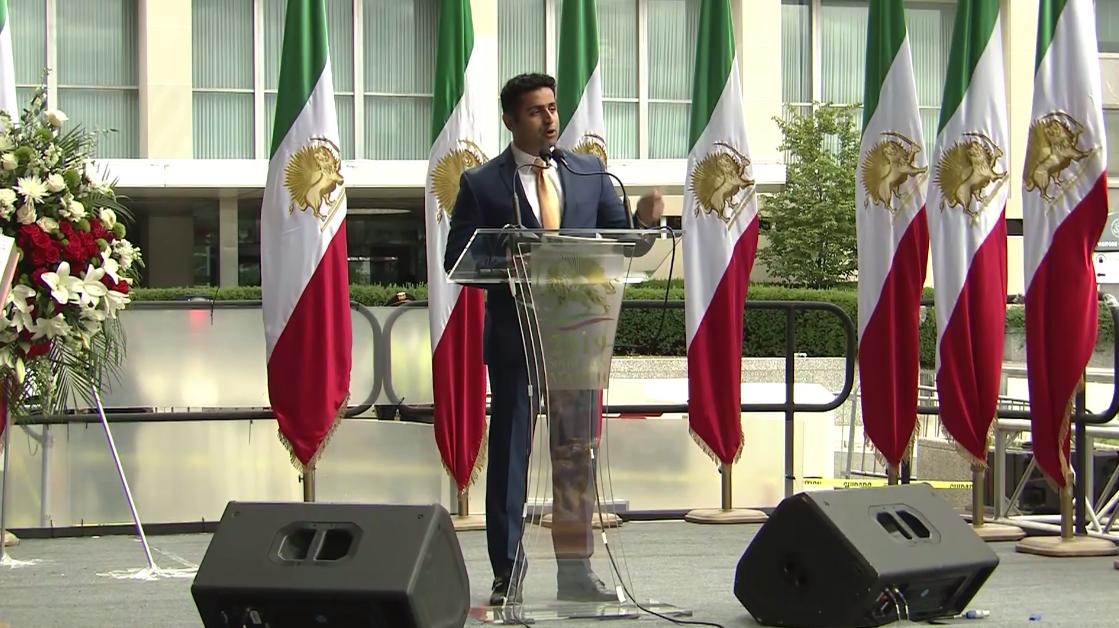 “We call on the United States to support the Iranian uprising,” said Amir Emadi, an Iranian activist who made the opening remarks of the event. Emadi also called for the designation of the Iranian regime’s Intelligence Ministry (MOIS) as a terrorist organization. The U.S. designated the Revolutionary Guards (IRGC) as a “Foreign Terrorist Organization” (FTO) recently, and Iranians across the globe have been calling for the MOIS designation as a complementary step to help stop Tehran’s notorious apparatus of terror. 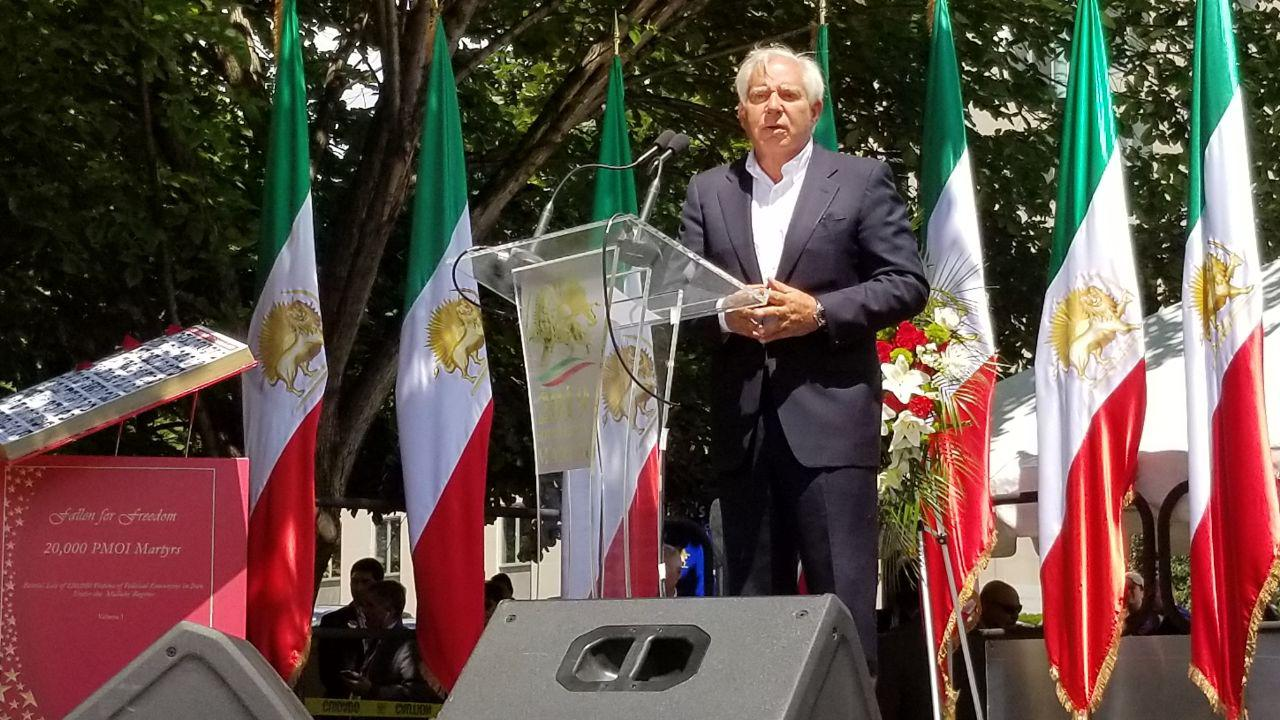 “We’re here to remind our friends in this building and the White House that there are some things about the regime that must be remembered. There is no reforming the mullahs in Tehran,” said Senator Robert Torricelli at the Washington rally.

Torricelli iterated a list of the regime’s terrorist activities and human rights violations, including the execution of dissidents, bombing of U.S. bases in Middle East countries, and the recent downing of a U.S. drone. over the Strait of Hormuz.

“Terrorists don’t reform! The reality is the mullahs will never change, they will develop nuclear weapons, they will spread terror. We need regime change and we need it now!

“Where will new leadership come? It will come from millions of people in Iran and abroad. The people of Iran are talented and educated. They can run their country in freedom. They don’t need the mullahs to run their country… Join with us in ending this terror. Let Iran be free!” he added.

“To our friends in Europe and the UN, if Iran were a nation in Europe, you wouldn't tolerate the mullahs for a minute because of their executions, the torture, and death. Do the people of Iran deserve less because they don’t live in Europe?

“To Secretary Pompeo, stand for the best of the Iranian people, who want a better future for their children.” 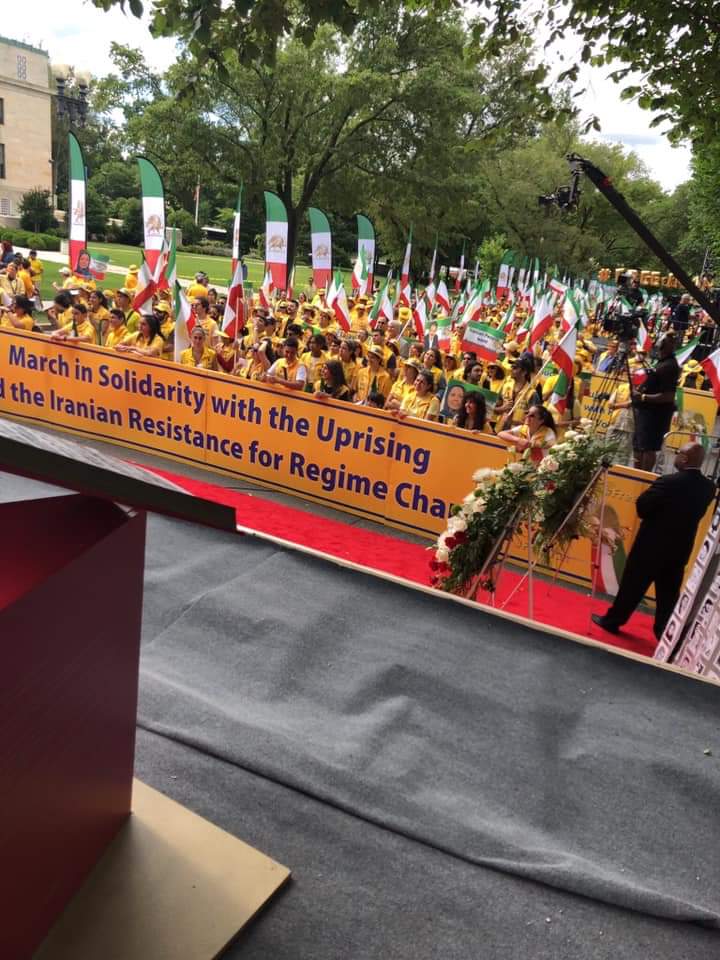 Large rally of Iranian-Americans marching in solidarity with the uprising in Iran and in support of the Iranian Resistance for regime change - Washington - June 21, 2019 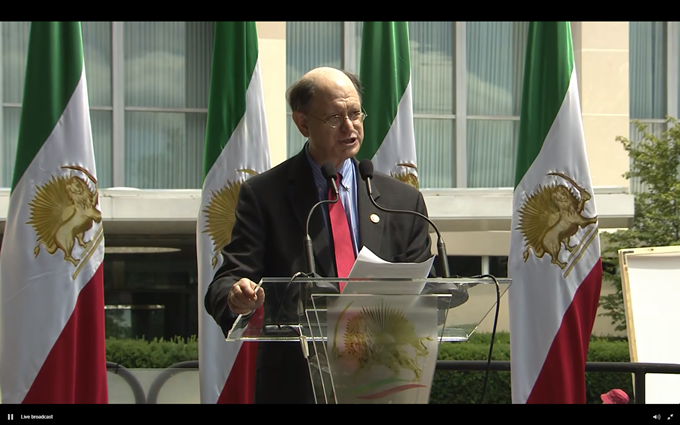 “This is a regime known for mass executions, jailing of journalists, spreading of terrorism in the region,” said Rep. Brad Sherman at the Washington demonstration.

“We stand in solidarity with brave Iranians who are fighting for a new chapter in the history of this great nation. This chapter will be written by Iranians.

“This regime may be on its last legs. It is acting with desperation to distract people from its corruption,” he reiterated.

“I commend Madam Rajavi for her advocacy of democracy and equality.

“The U.S. Justice Department has charged two agents of the Iranian regime for its collecting of intelligence of Iranian opposition members here in Washington. I’m sure their agents are watching our videos now. Let them see the future of Iran,” Rep. Sherman explained.

“I look forward to the day we see free elections in Iran.” 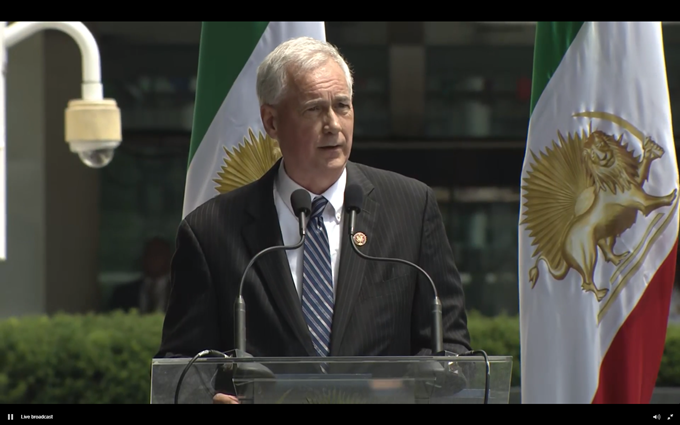 “The Iranian freedom movement has grown dramatically. As the tyranny of the mullahs has become more extreme the international resistance has become more resolute,” said Rep. Tom McClintock from California’s 4th District.

“Iran has been oppressed and plundered by a gang of thugs who have appointed themselves as the rulers of the country. Their claim to power is illegitimate and their time is approaching. Their desperation is showing at home and abroad.

“Their wanton attacks against dissidents abroad, their hostility toward their neighbors, and their unprovoked attack on an American drone are signs of desperation and panic,” he stressed.

“The entire free world has witnessed your struggle. Your fortitude and courage are inspiring the admiration of the world. You’re writing the next chapter of human civilization.” 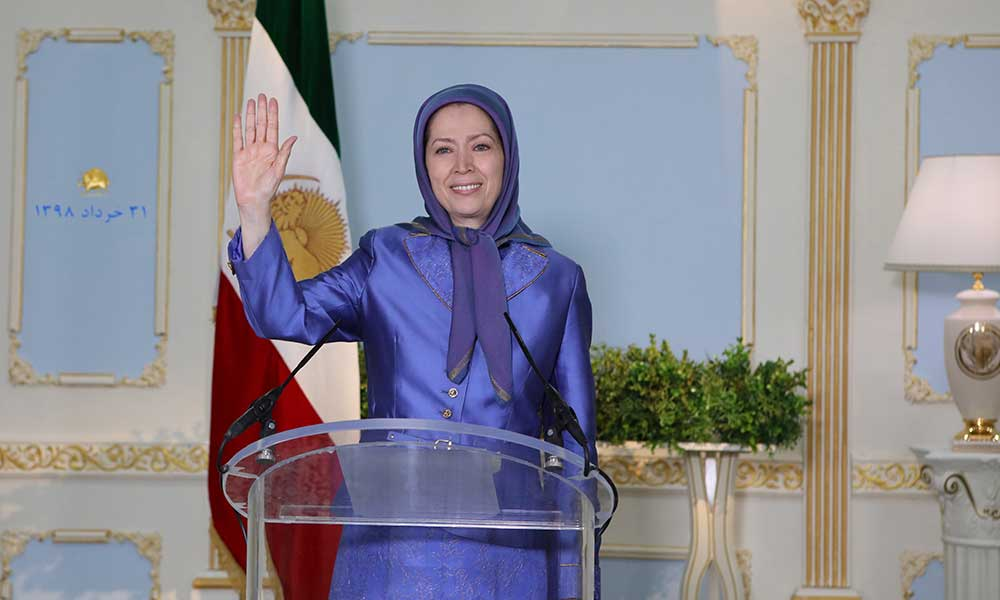 “Fellow sympathizers of the Iranian Resistance, rebels for a FreeIran, traveling all the way from across the U.S., to come together in Washington, D.C. The Iranian nation hears your anthems and your cries for freedom. For 40 years, the murderous mullahs have pointed their fingers at the U.S. as the enemy to fend off the people’s fury. Now, the people of Iran cry out in every street and alley that ‘our enemy is right here; the mullahs lie when they say America is the enemy,’ said Iranian opposition President Maryam Rajavi to the Washington gathering.

Greetings to you, to the elected representatives of the American people, to personalities, friends & supporters of the #Iran ian people’s Resistance 4 democracy & #HumanRights. They have come today to stand with you. #March4RegimeChangeByIranians #FreeIran pic.twitter.com/qMfbENZuvB

‘This is a regime whose Constitution has formally replaced people’s sovereignty and universal suffrage with the rule of the mullahs… The people of Iran inundated by floods, destitution, and various calamities, are crying out, ‘Let go of Syria and think about us instead.’ However, the regime’s meddling and crimes in Iraq, Syria, Yemen, Lebanon & Afghanistan have brought them no serious consequences,” Mrs. Rajavi added.

What is the real question at the core of the U.S. and European policy vis-a-vis the religious fascist regime ruling #Iran: appeasement or decisiveness? #March4RegimeChangeByIranians #FreeIranhttps://t.co/k5UsN2hDGy pic.twitter.com/fdKlMIXu21 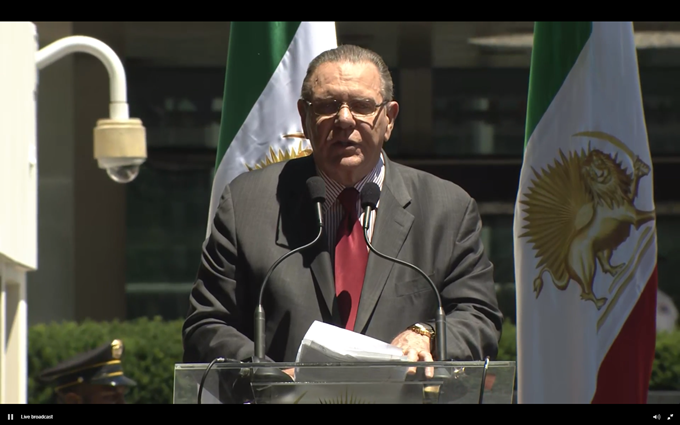 “2018 was a major turning point for Iran. The U.S. pulled out of the nuclear deal and for the first time in 39 years put Iran on notice… Using proxies must stop. Building ballistic missile must stop. Spreading terrorism must stop. And you must stop repressing your people,” said Gen. Jack Keane (ret) at the Washington rally.

“The U.S. has imposed the toughest sanctions against the Iranian regime in 39 years. The U.S. designated the IRGC as a terrorist organization (FTO)… Iran’s economy is in recession. The currency is devaluing. Unemployment is skyrocketing. There’s a food shortage. And the people of Iran are correctly blaming the mullahs,” he added.

“Iran’s provocations have two purposes: To pressure the U.S. to remove the sanctions and to convince the countries of the region that the U.S. will not protect them. Both will fail,” Gen. Keane continued.

The retired general listed the Iranian regime’s terrorist activities against U.S. troops in the Middle East and its support for the Syrian regime, Hamas and Hezbollah, and the disruption of shipping lanes and oil.

“The United States will lead a coalition to keep the shipping lanes in the Persian Gulf and the Gulf of Oman open. The regime will not reach nuclear weapons capability. This is a red line.

"Despite the current crisis, Iran is on the best path in the past 39 years. America stands behind you and the Iranian people. We will be there with you until you get your homeland and freedom back,” he added. 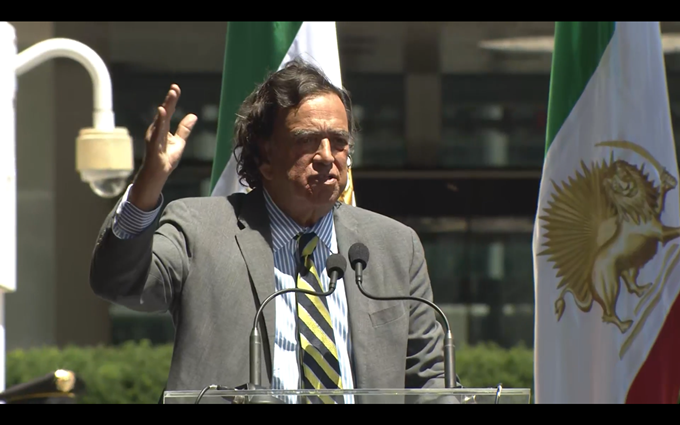 “The strength of the movement of the support is bi-partisan,” said Governor Bill Richardson at the Washington rally.

“We need a new regime, and that regime is you, the MEK, the NCRI, the alternative. It’s a strong organization, with a lot of confidence and commitment and leadership abilities. The top leader, Mrs. Rajavi, is a great leader. The platform, what you stand for, a free Iran, democracy. You have a platform, a plan. You take risks. The MEK takes risks, being targeted in Europe, in America, for freedom, for democracy. Taking on the regime, talking about the issues in Iran. What you represent is the future. You have international support. You’re on the right side of history,” he said. 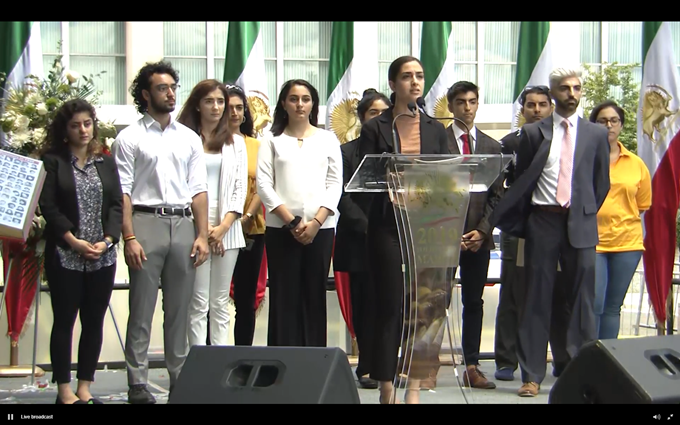 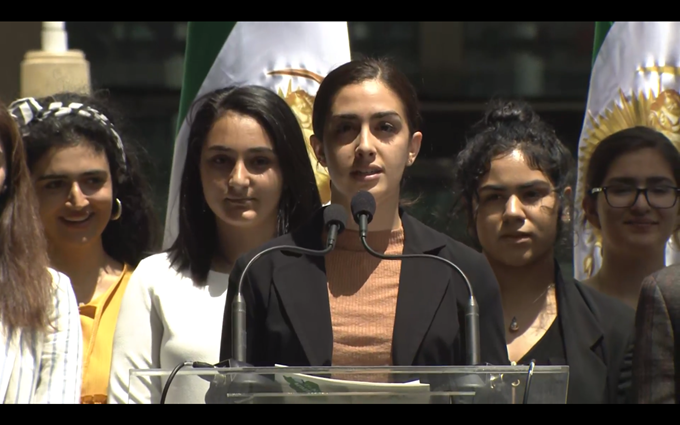 Aideen Seyedian, another member of the Iranian-American youth delegation, discussed the plight of youth back in Iran.“4.5 million university graduates are unemployed 80 percent of Iran’s young population is living under poverty. The youth are continuing their uprising. Our message is the same as that of Iranian youth: There are no reformists in this regime. We call to an end to this theocratic regime. We stand with resistance units and Mrs. Maryam Rajavi,” he said. 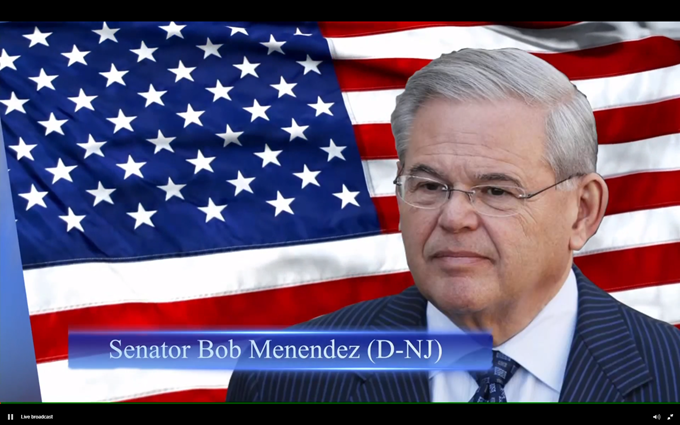 “Unfortunately, across the Middle East, Iran continues to threaten the national security and interests of the United States. It continues to pursue a belligerent, ballistic missile program,” said Sen. Bob Menendez to the Washington demonstration.

“The people of Iran suffer under a repressive regime with absolutely no respect for basic human rights and no economic investment in their welfare… I will always support justice and human rights, peace and security and above all else, the rights of all Iranians to fundamental freedoms.” 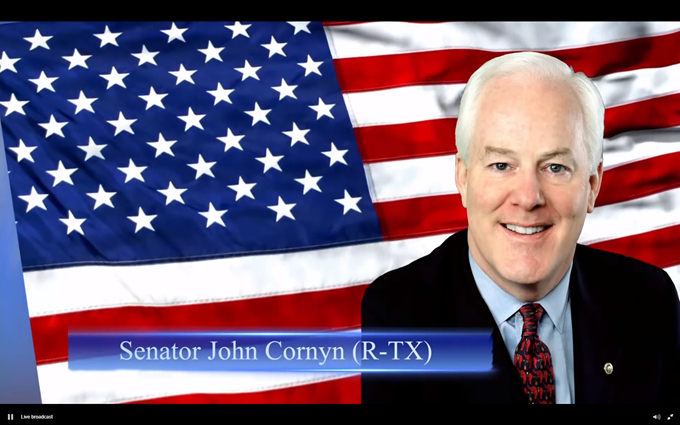 “As recent events have demonstrated, the Iranian authoritarian government is a dangerous and destabilizing regional influence that rules its people with an iron fist, suppressing their individual rights and subjecting them to humanitarian abuse. As the largest State sponsor of terror in the world, Iran has bankrolled terrorist organizations that have waged war and undermined regional stability for decades,” said Sen. John Cornyn to the Washington gathering.

“In order to help the Iranian people, I believe that it is important for the United States to support the Administration’s ‘maximum pressure policy.’ A policy that promotes freedom and individual rights of the people while taking every step necessary to liberate them from the regime’s oppressive rule.” 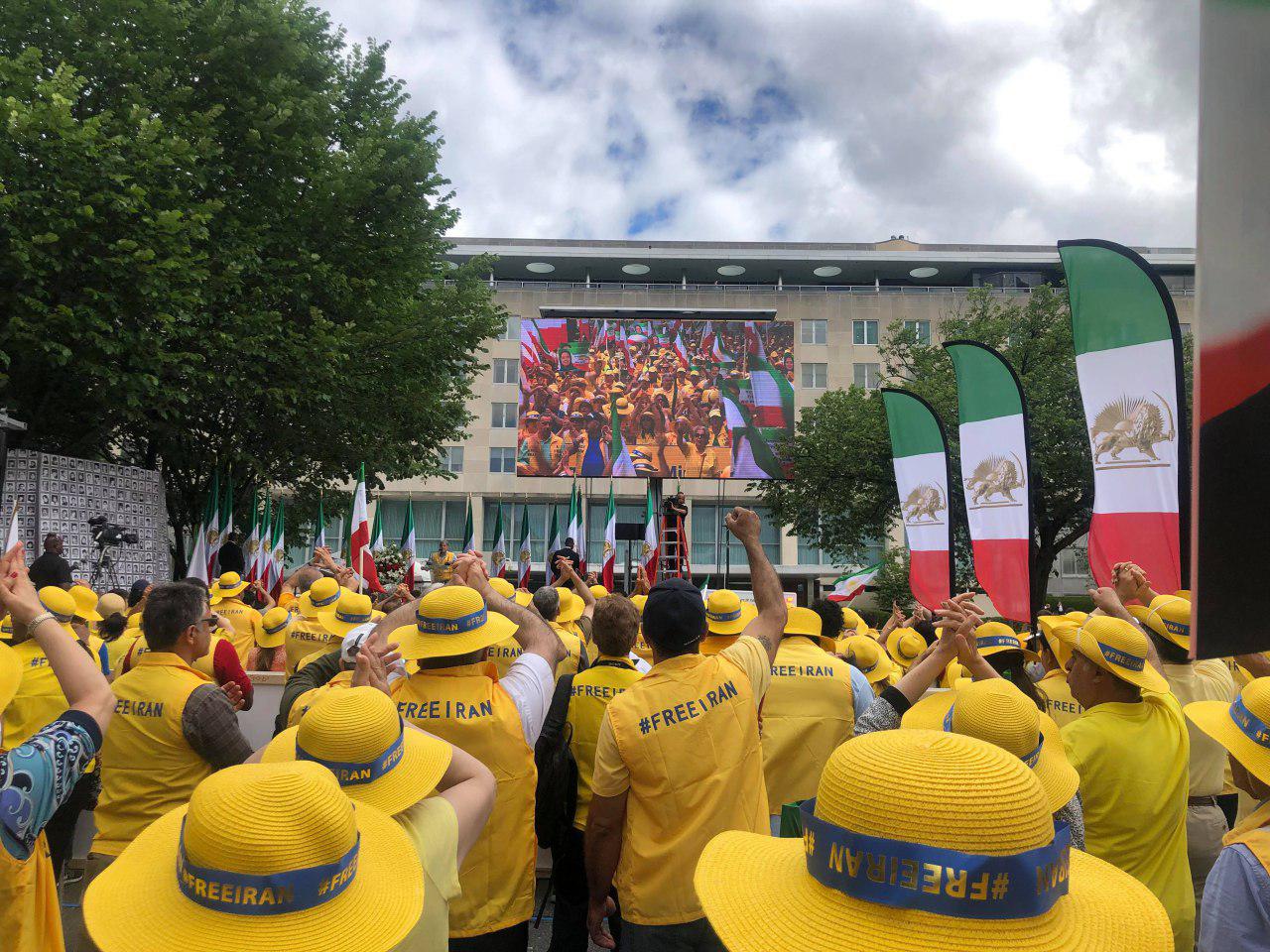 A massive rally of Iranian-Americans in solidarity with the uprising in Iran and in support of the Iranian Resistance for regime change - Washington - June 21, 2019

Thousands of Iranians supporters of the opposition rallied in Washington DC