Iranian-Americans at the “Iran Freedom March” voicing support for ongoing protests in Iran, calling for the recognition of the Iranian Resistance against the mullahs’ regime - Washington, D.C. - March 8, 2019

Washington D.C, March 8, 2019 -  On Friday, Iranians from more than 40 states across the U.S. gathered in Freedom Plaza, Washington D.C., to join the Iran Freedom March, a rally in support of popular protests in Iran. The demonstrators also voiced support for the National Council of Resistance of Iran (NCRI), the main Iranian opposition coalition which has been calling for the toppling of the tyrannical regime of mullahs ruling Iran and the establishment of a secular and democratic state.

The rally took place as the past 15 months have seen ongoing protests across Iran. People from all walks of life, all segments of the Iranian society and all corners of the country have been holding demonstrations, strikes and sit-ins for their most basic rights, trampled by the ruling mullahs for four decades. The people are holding the mullahs’ regime in its entirety for deteriorating economic conditions and lack of political and social freedom. 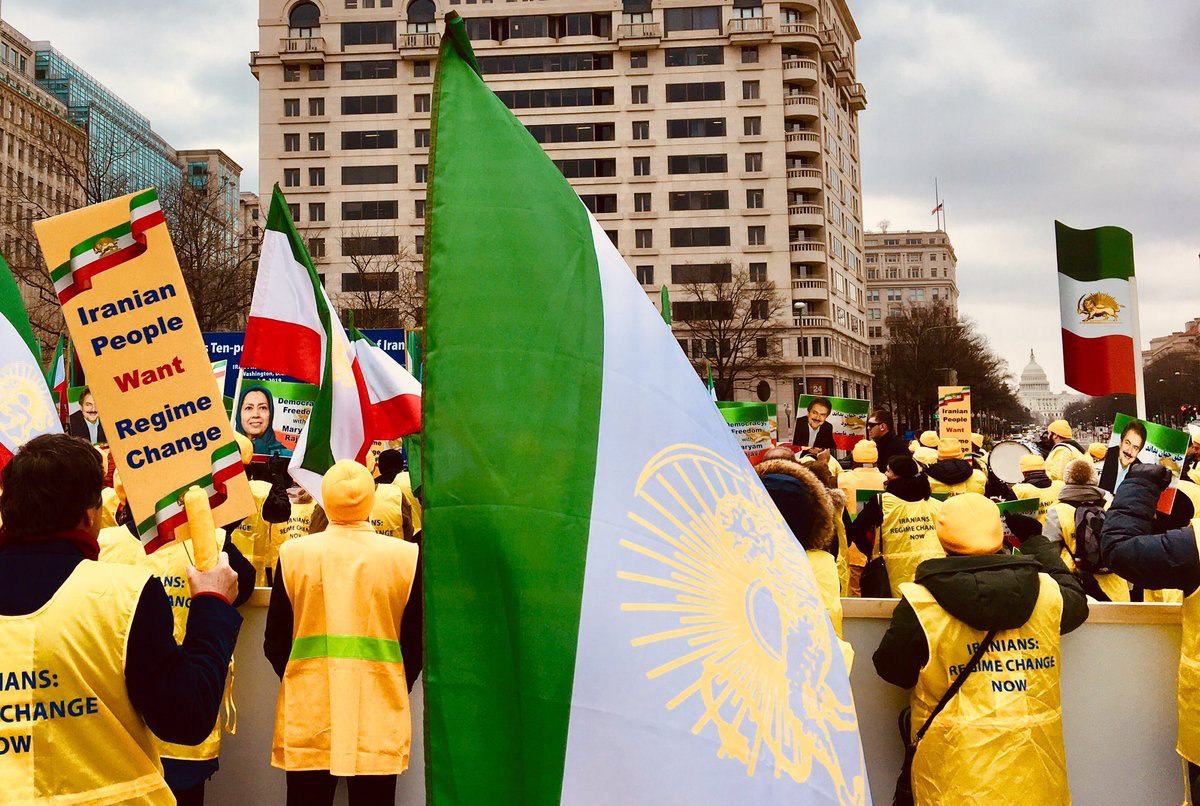 Protests over unpaid wages, high prices, low salaries, government corruption and the incarceration of activists have become a common scene across Iran. Slogans of regime change and calling off the government for its corruption have become increasingly popular in Iranian protests during the past year. “Down with Khamenei and Rouhani,” “Death to dictator,” and “The enemy is right here” are some of the slogans regularly chanted across Iran.

The year 2018, in particular, began in Iran with a nationwide uprising that lasted more than two weeks and encompassed all 31 provinces of Iran, spreading to more than 142 cities.

Participants in the Iran Freedom March were there to make sure the voices of their compatriots inside Iran were heard in the U.S. “Every Iranian shouts: Down with Khamenei and Rouhani,” the rally’s participants were chanting. 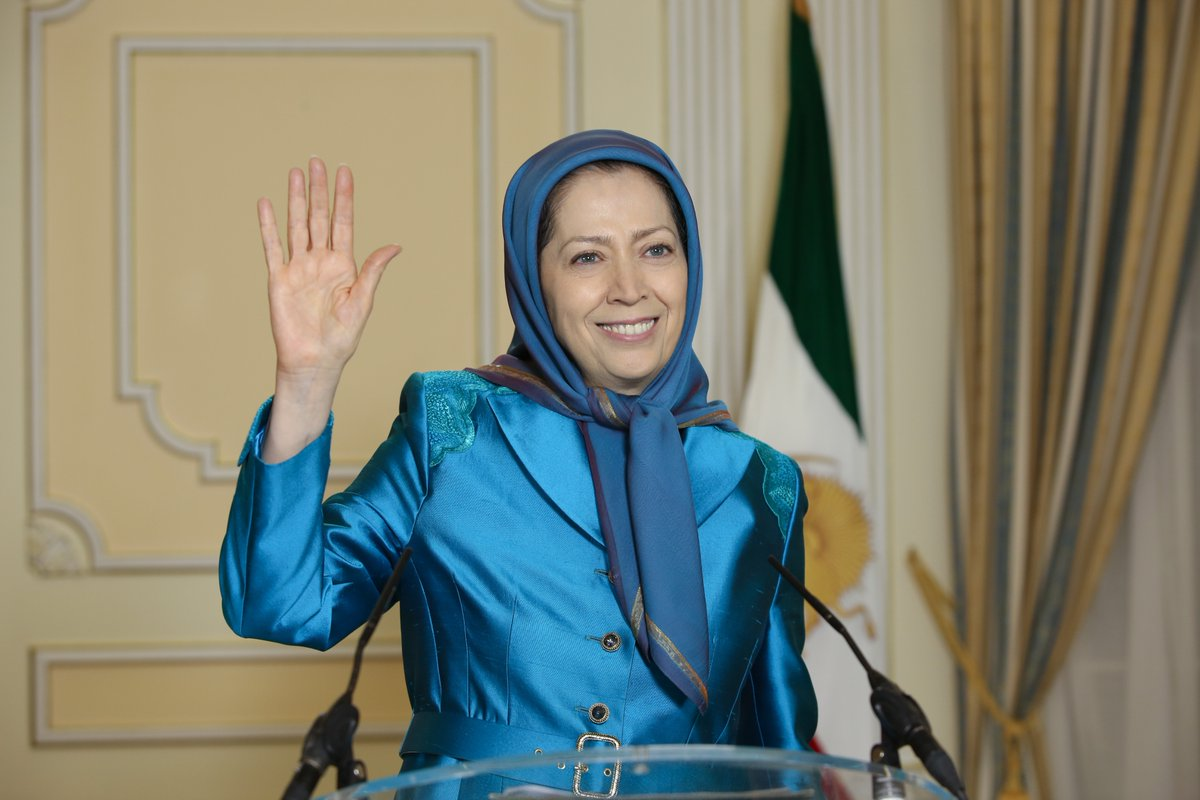 In a televised message to the rally, NCRI President Mrs. Maryam Rajavi marked International Women’s Day and the struggles of Iranian women for freedom in their country. “On March 8, I call on all women in the United States and around the world to support the fight of their sisters in Iran to overthrow the ruling regime,” Mrs. Rajavi said.

Mrs. Rajavi also underlined how the corrupt rule of the mullahs has driven the lives of the Iranian people into poverty, unemployment, inflation and a rash of economic, social and environmental crises. “So long as the clerical regime is in power, none of these ills will be resolved. The ruling mullahs will become ever more dependent on their devastating policies, namely the suppression of Iranian society, warmongering and destructive meddling in the region, money laundering, terrorism in Europe and the United States, and plundering the assets of the people of Iran,” Mrs. Rajavi said.

That is a bald-faced lie to preserve the religious tyranny; and it is an insult to the people and resistance of #Iran.#DCIranFreedomMarch #FreeIran#IranRegimeChange pic.twitter.com/PuJuQUlPPy

Ongoing protests in Iran and the continued activities of Iranian Resistance Units, networks of supporters of PMOI/MEK, have largely undermined the rule and power of the ruling regime, Mrs. Rajavi underlined. “The regime now faces one of the most difficult periods of its rule. The continued uprisings have destabilized the ruling structure. And there is no going back. Change in Iran is within reach more than any other time,” Mrs. Rajavi said.

Mrs. Rajavi underlined the NCRI’s a movement deeply rooted in Iran which is capable of overthrowing the regime and managing affairs during the transition so that the Iranian people can choose their true representatives through free and fair elections. “The international community is duty-bound to respect the struggle of the Iranian people to overthrow the clerical regime. This is essential for global peace and security,” Mrs. Rajavi said.

Rep. Sheila Jackson Lee of Texas delivered an inspiring speech at the gathering.

“I believe in what you believe in. The Iranian people want regime change. We want it in a peaceful manner. We want people to do it in a democratic manner and a strong manner. We want the nuclear capacity to be contained so that we can focus on the investment in the people of Iran. We thank you very much for the leadership that you have given. I am a believer in democracy. I believe in your strength, determination and perseverance. Never give up in the democracy of peace, in the democracy of strength,” she said. 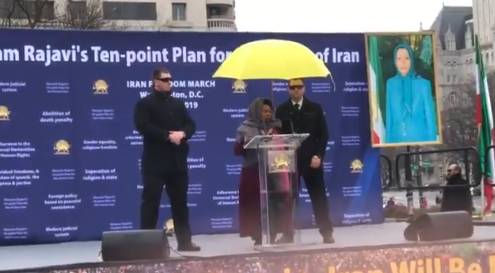 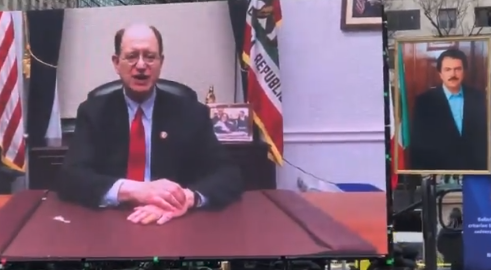 Linda Chavez, former White House Liaison Officer, delivered a speech condemning human rights violations in Iran and specifically criticizing the appointment of Ebrahim Raisi as the chief of the regime’s judiciary by supreme leader Ali Khamenei. Raisi was a member of a panel of judges who sentenced thousands of political prisoners to death in 1988. At the time, the Iranian regime executed more than 30,000 political prisoners, most of whom were members and supporters of the People’s Mojahedin Organization of Iran (PMOI/MEK).

“How can there be freedom when you have a monster who killed people of all ages, men, women, even pregnant women, children, young girls, 15 year old girls, tortured and then executed by this monster. So we must say no to this regime. We must press for freedom, for all of the things that Madam Rajavi has promised the Iranian people,” she said. 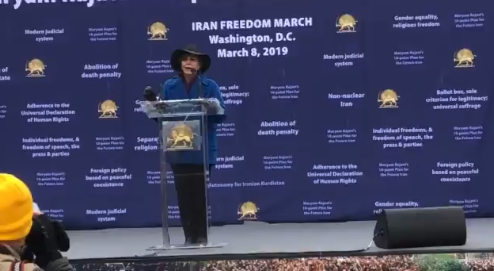 Adam Ereli, former U.S. Ambassador to Bahrain and former deputy spokesperson of the State Department, also delivered powerful remarks at the Washington, D.C., Iran Freedom March.
“There are millions of Iranians who don’t let prison or torture or hunger or death stop them from protesting. Do you stand with them? (Crowd: YES!) Are you afraid of the mullahs in Tehran? (Crowd: NO!) Do they speak for the people of Iran? (Crowd: NO!) Are you ready to take your country back? (Crowd: YES!)” 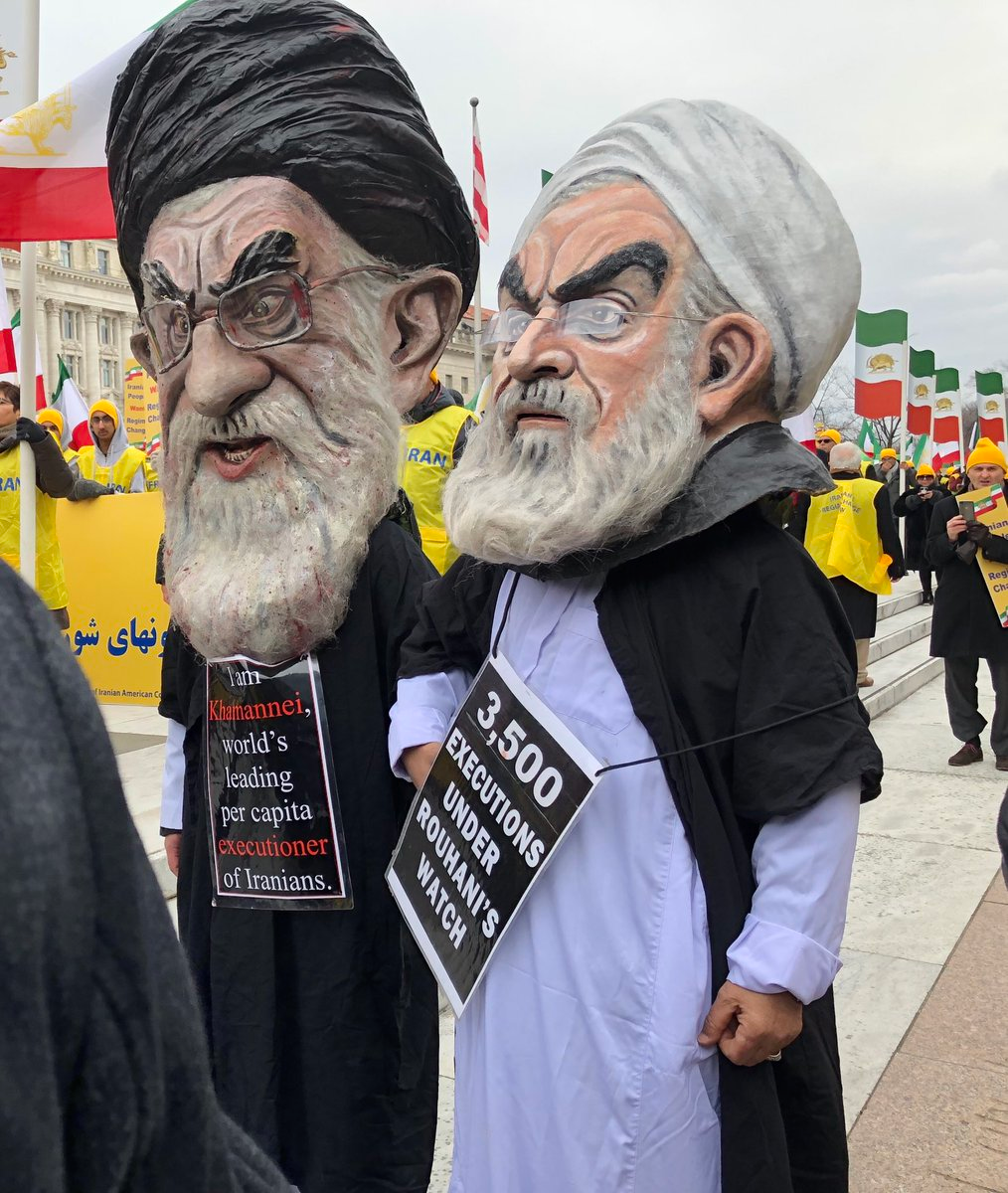 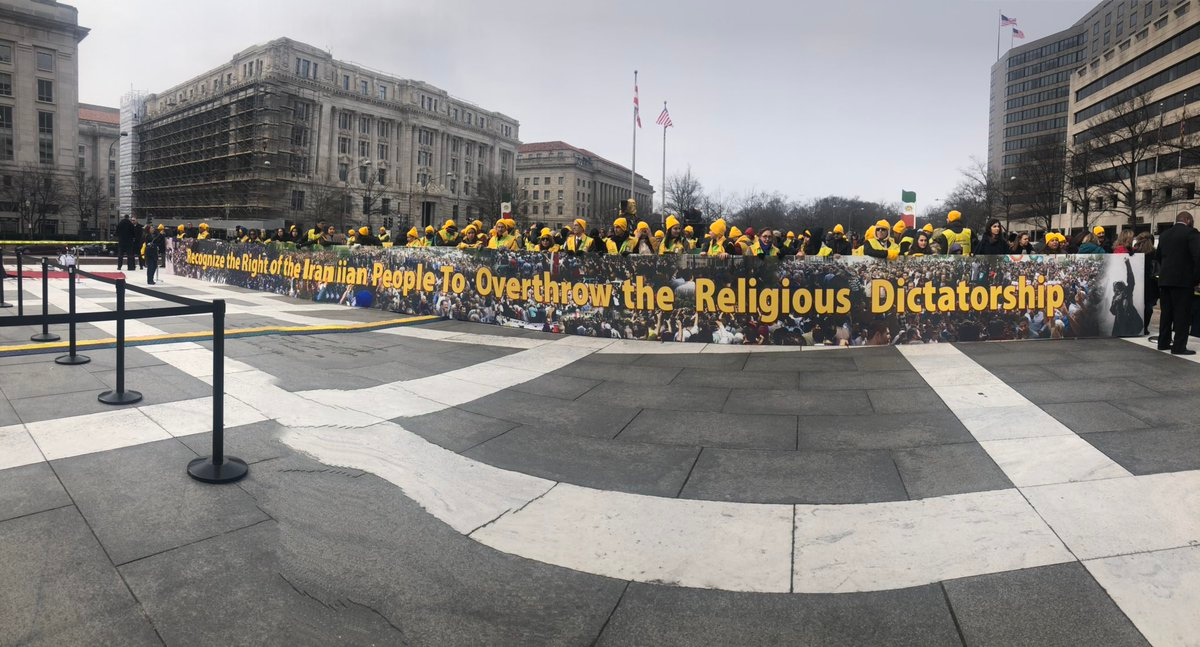 “Iran Freedom March” calling on the international community to recognize the right of the Iranian people to overthrow the religious dictatorship ruling Iran - Washington, D.C. - March 8, 2019

The Iran Freedom March rally called for a firm policy vis-a-vis the Iranian regime’s terrorism, human rights violations and security threats to global peace and security. The participants called for the international recognition of the NCRI as the democratic alternative of the Iranian regime and the representative of the Iranian people. They also voiced their support for Mrs. Rajavi’s ten-point plan, which calls for a democratic and secular state that provides equal opportunities to all Iranians regardless of their gender, religion and ethnicity. Mrs. Rajavi also calls for the dismantlement of Iran’s nuclear project, the abolishment of the death penalty and an end to meddling in the affairs of neighboring countries. “Democracy, freedom with Maryam Rajavi,” the rally participants were chanting. 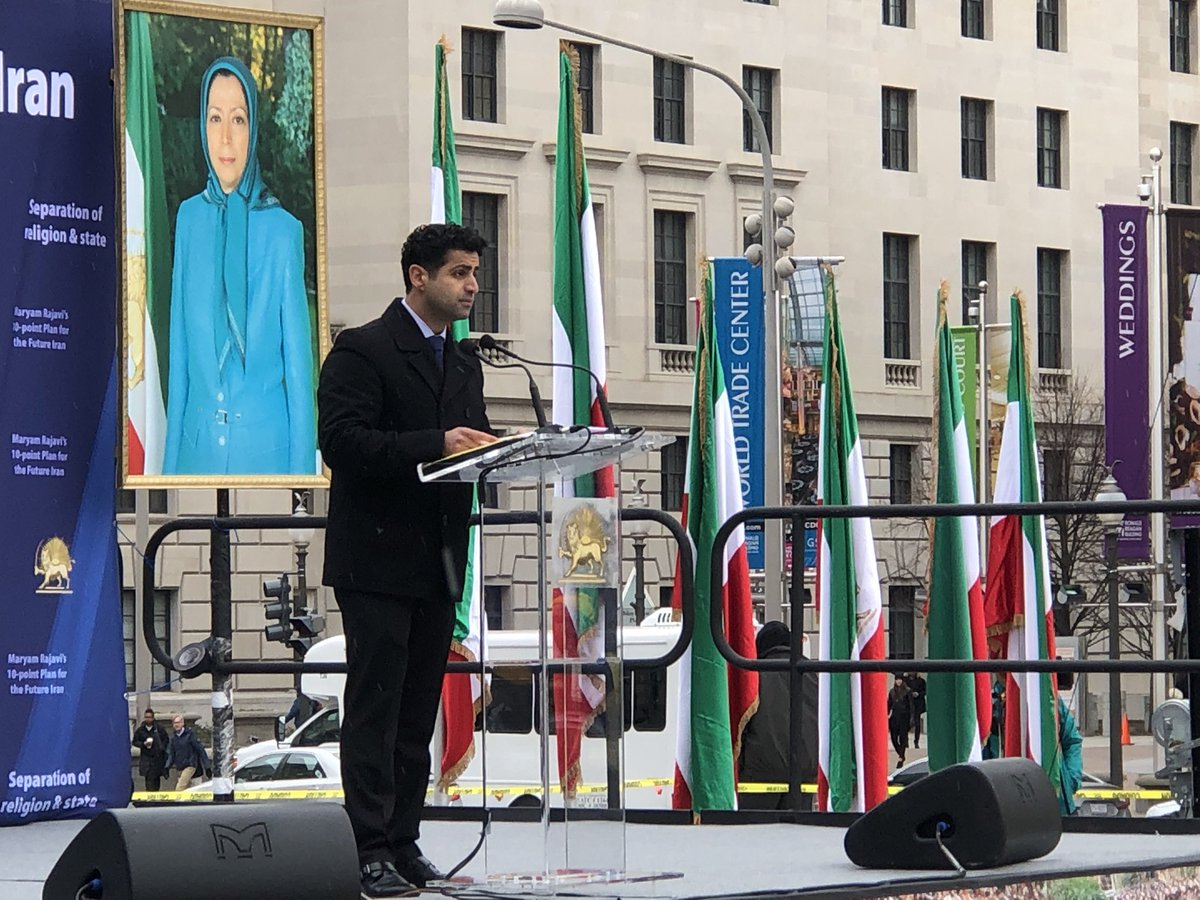 A delegation of women at the “Iran Freedom March” highlighting the plight and ongoing struggles of Iranian women against the mullahs’ regime - Washington, D.C. - March 8, 2019