Berlin, July 6, 2019 - More than 15,000 Iranians from across the globe, especially Europe, gathered in Berlin near the historical Brandenburg Gate on Saturday, July 6, calling for regime change in Iran by the Iranian people. The demonstrators called for the recognition of the Iranian opposition coalition National Council of Resistance of Iran (NCRI) and voiced their support for the People’s Mojahedin Organization of Iran (PMOI/MEK) as the cornerstone member of the NCRI alliance.

This is the third event in a series of demonstrations in different cities after opposition leader Massoud Rajavi called on Iranians across the world to be the voice of the Iranian people, who have been holding protests in the past year and are calling for the overthrow of the ruling mullahs. Previous venues of demonstrations by Iranian resistance supporters included Brussels (June 15) and Washington, D.C., (June 21).

Following the recent sanctioning of the Iranian regime Supreme Leader Ali Khamenei by the United States, the demonstrators called for the blacklisting of the mullahs’ President Hassan Rouhani. As secretary of the regime’s Supreme National Security Council, Rouhani has a decisive role in all of the regime’s terrorist plots abroad and his blacklisting is long overdue. 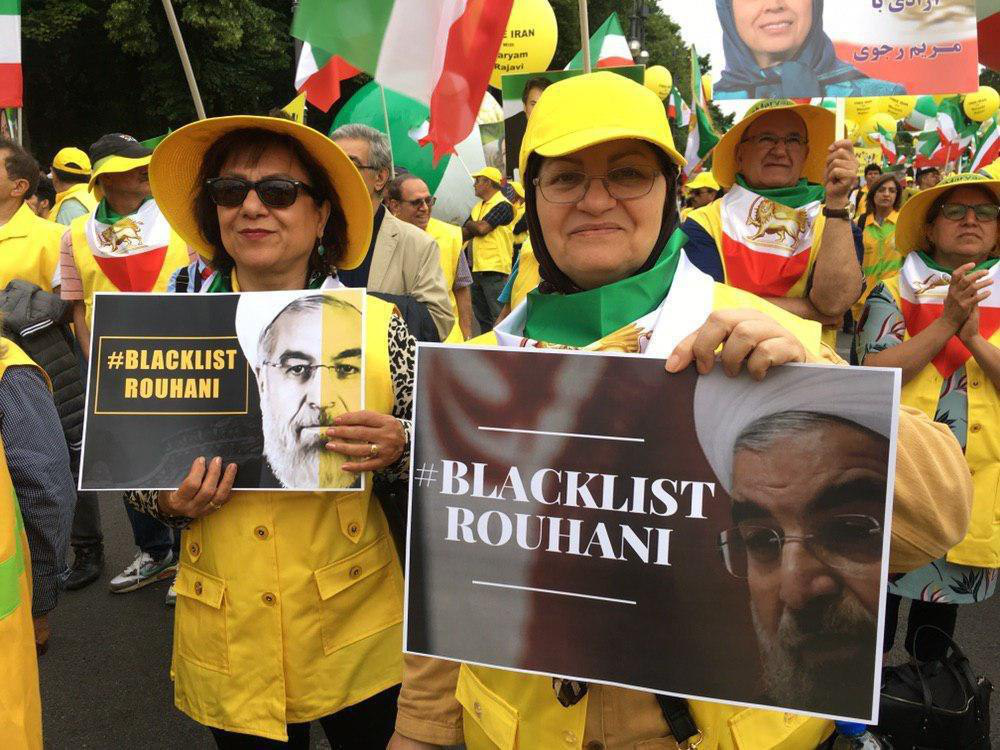 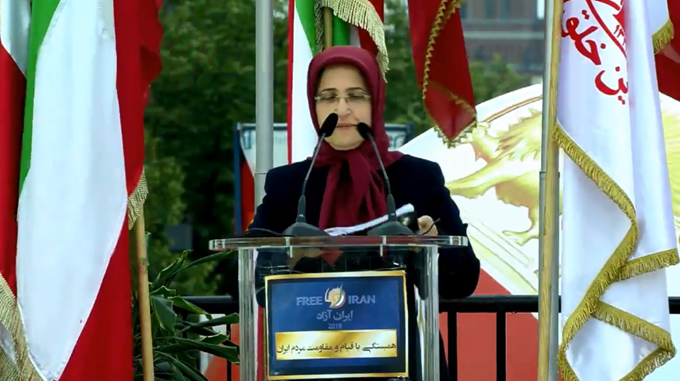 “Our message to those who are trying to keep the regime in power is, you are on the losing side of history. This regime is doomed to be destroyed. To those who are demonizing the resistance and trying to help the regime, and the reporters who are working with the mullahs’ Ministry of Intelligence and Security (MOIS), they are on the wrong side of history.

“We call on EU countries to put the MOIS and Islamic Revolutionary Guards Corps (IRGC) on the list of terrorist organizations and expel their agents from their countries.

“The mullahs are at their weakest in the past 40 years. Ashraf 3 has become the symbol of hope,” she added, referring to the PMOI/MEK’s site in Albania. 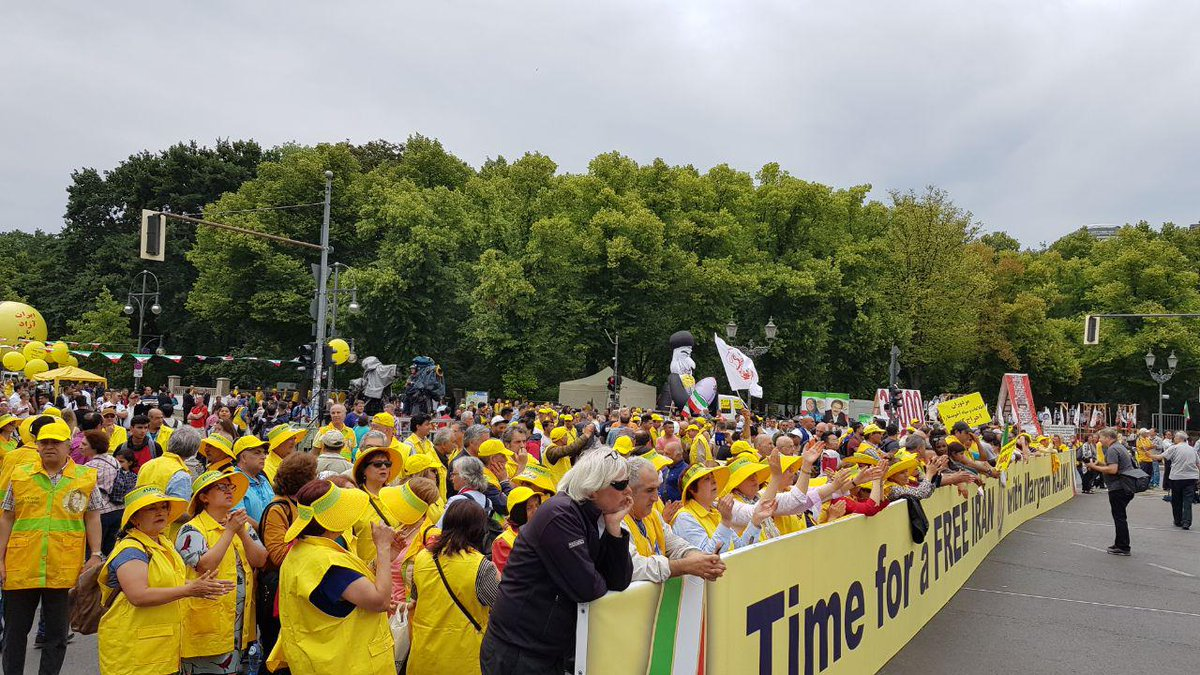 The demonstrators were heard chanting slogans in support of the uprisings in Iran and the organized resistance movement of the Iranian people. “Down with the rule of the mullahs,” the protesters chanted.

The banners of the demonstrators called on the European Union to adopt a firm policy toward the Iranian regime, including the terrorist designation of the IRGC and MOIS. 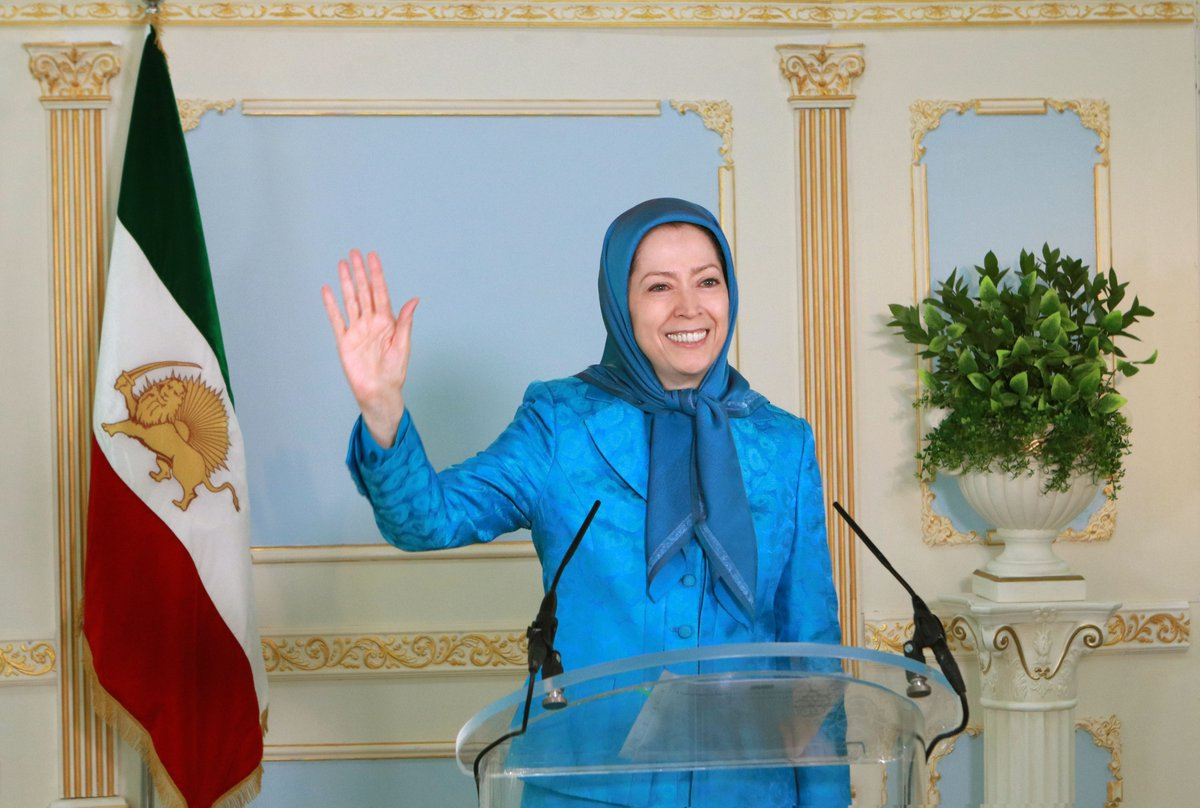 NCRI President Maryam Rajavi sent a video message to the Free Iran rally emphasizing on the necessity for Europe to adopt a firm policy vis-a-vis the mullahs’ regime in Iran.

“In this grand demonstration, your message and the message of the people of Iran to the world and particularly to Europe is this: Stop the policy of giving concessions to the religious dictatorship,” Mrs. Rajavi said.

In her speech, Mrs. Rajavi noted that 40 years of seeking reform within the regime has only provoked the mullahs in their crimes and hostile behavior toward the international community.

“The mullahs impudently speak every day of resorting to uranium enrichment and preparing for a nuclear bomb,” Mrs. Rajavi said, stressing that if the mullahs were not so sure of their relations with Europe, they would not be so insolent?

Did the history of Germany and other European nations not teach the world what a heavy and bloody price humanity has to pay for appeasement of fascism? #FreeIran #Iran pic.twitter.com/KB5Hn9Xzpo

What we have urged is that western governments do not help the mullahs remain in power. #Iran #FreeIranhttps://t.co/5k19YZDpgI pic.twitter.com/NdfPEAlYTj 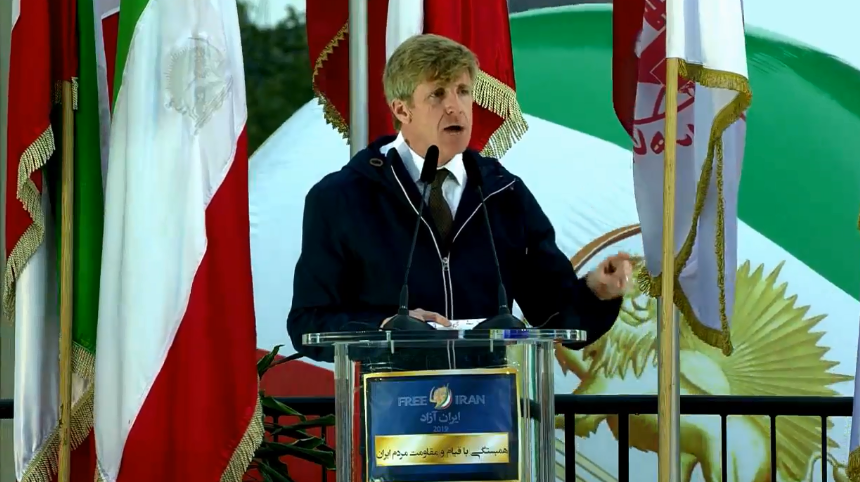 Patrick Kennedy, the former member of the U.S. Congress, delivering a speech at the Free Iran rally in Berlin - July 6, 2019

Patrick Kennedy, the former member of the U.S. Congress and son of the late Senator Edward Kennedy, delivered his remarks at the Berlin rally and once again voiced his support for the Iranian people’s struggle for freedom from the mullahs’ dictatorship.

“We are at a historic point in history when it comes to the freedom of the people of Iran. This is not just a problem for Iranians to solve, it’s a problem for anyone in the world who cherishes freedom and who hates the tyrannical regime of the mullahs in Iran,” he said. 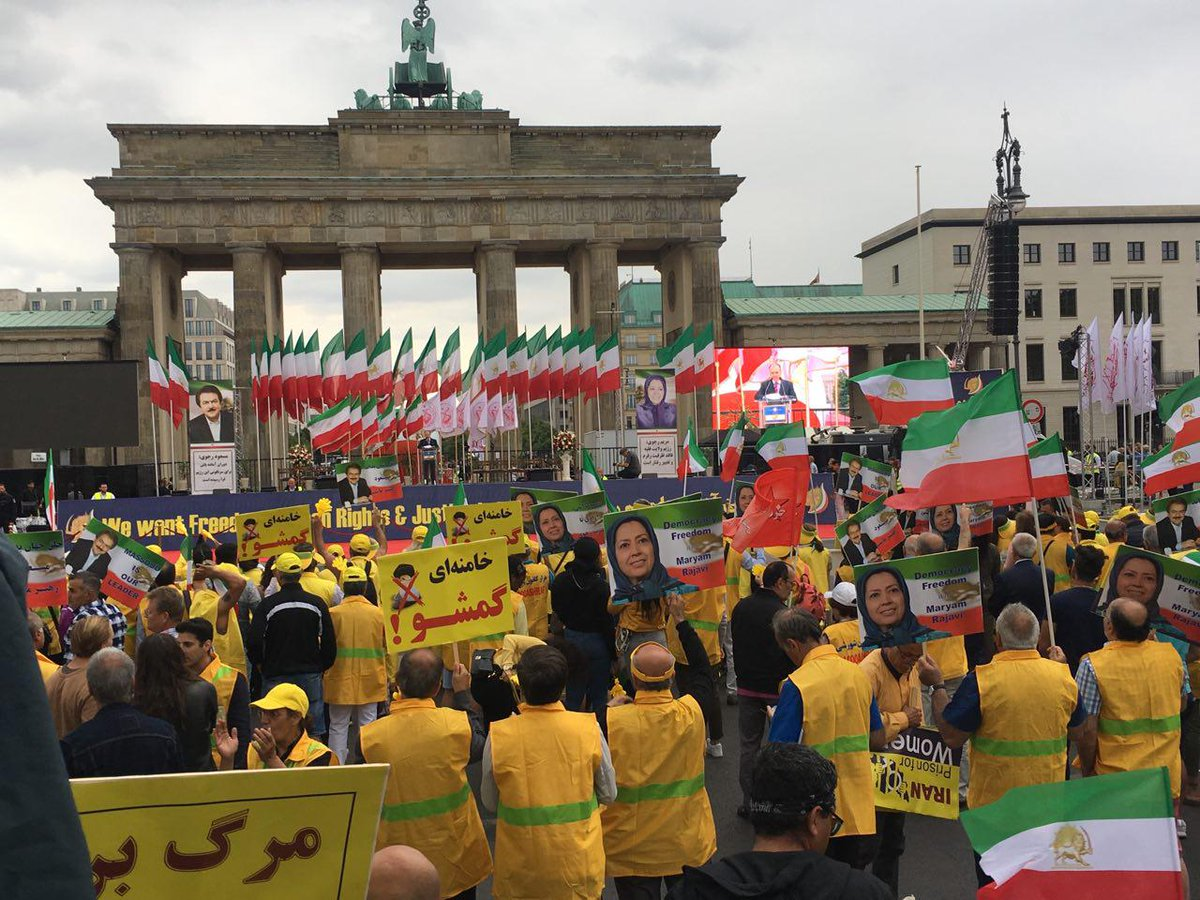 “To Madam Rajavi and the PMOI/MEK, I say, I support you, I support the MEK. When the MEK continues to get attacked on all sides, it means that the mullahs cannot attack the MEK on the 10-point plan by Madam Rajavi, or on the assertion that Iran is the leading state-sponsor of terrorism, or that the regime or Iran supports Hamas and Hezbollah. It can’t attack the MEK because the MEK is right and the mullahs are wrong,” the former Congressman continued.

“I am in favor of the strongest possible sanctions against the regime in Tehran and their terror. This is the answer that is going to help speed up the day where we’re going to overthrow this fascist regime.

“This is not the time for us to let up on the financial stranglehold on the mullahs. The economy is crashing, inflation is spiking. The mullahs can’t support their regime when we cut off the supply of money they use to continue to control their people. We need to keep sanctions going strong until we bring down this horrible dictatorship,” he concluded. 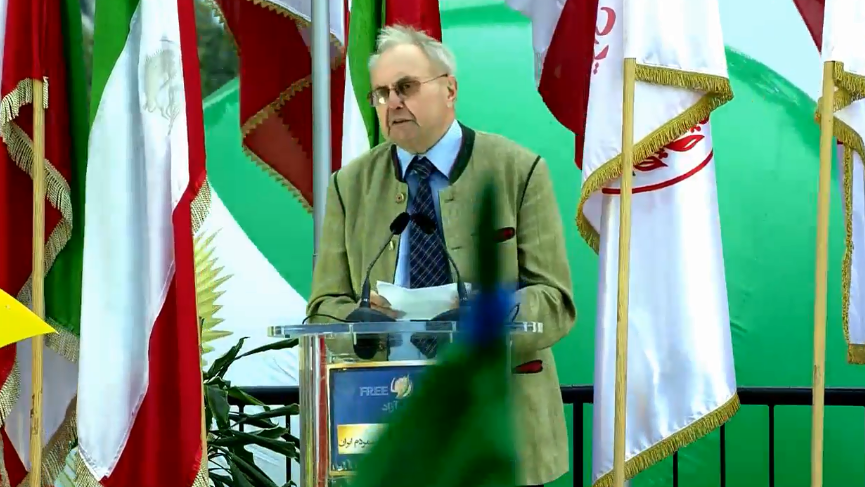 “The mullahs' regime is one of the worst dictatorships in history. The end of this dictatorship is within reach with Mrs. Maryam Rajavi and the NCRI,” Mr. Lintner said.

“This is why the mullahs' regime is so frightened of the alternative, and this is why they’re doing all they can to terrorize you. They use terrorism as a tool to maintain their power. The aim of their terrorism is the suppression of free speech.

“Germany has also acknowledged that the MOIS has used German soil for its terrorist activities. The regime’s embassy in Berlin is used for these criminal activities,” the former German interior minister reiterated.

Lintner reminded the audience that an Iranian regime diplomat was arrested last year in Europe in connection with a bombing attempt against the massive Iranian Resistance rally in Paris. 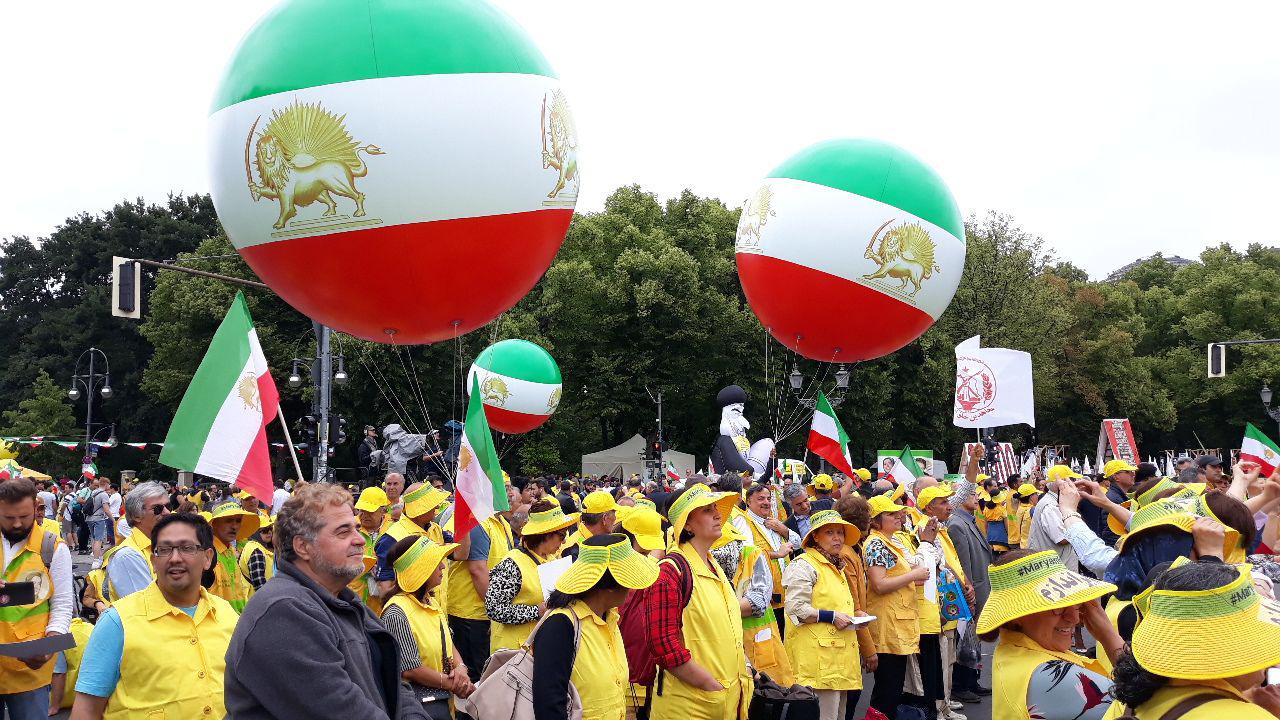 Iranians participating in the Free Iran rally in Berlin - July 6, 2019

“The MOIS is very active in Europe against the Iranian resistance. We must show them that we will not be held hostage in our own soil to their terrorist activities. We must use all means and legal channels to expel their agents from our countries and stop their espionage activities in Europe. Europe must stand up against the malign activities of the regime,” Mr. Lintner concluded. 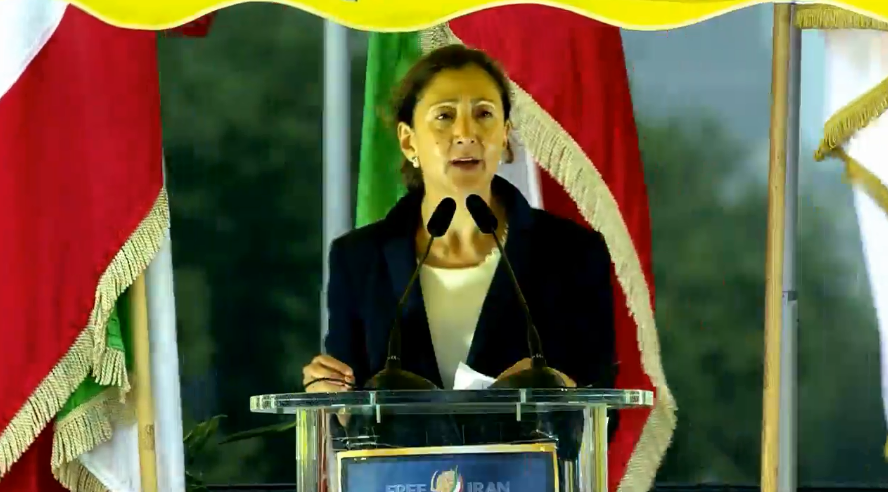 Colombian-French politician Ingrid Betancourt delivered a powerful speech voicing her support for the PMOI/MEK as the alternative for the mullahs’ regime in Iran.

“We want to tell Khamenei, we’re coming for you. We will hold you accountable for all the people you killed because they supported freedom and justice,” she said.

“We believe in the MEK, in your values and what you fight for… We are here to say to our governments in Europe that we don’t want any more agreements and concessions with the criminal government of the mullahs, Mrs. Betancourt added.

“We are here to defend our values and principles, and it doesn’t matter where we stand, left or right. The fight of the Iranian resistance is our fight,” the Columbian-French politician continued.

Betancourt chided European media for playing into the hands of the Iranian regime in demonizing the Iranian Resistance, especially the MEK. 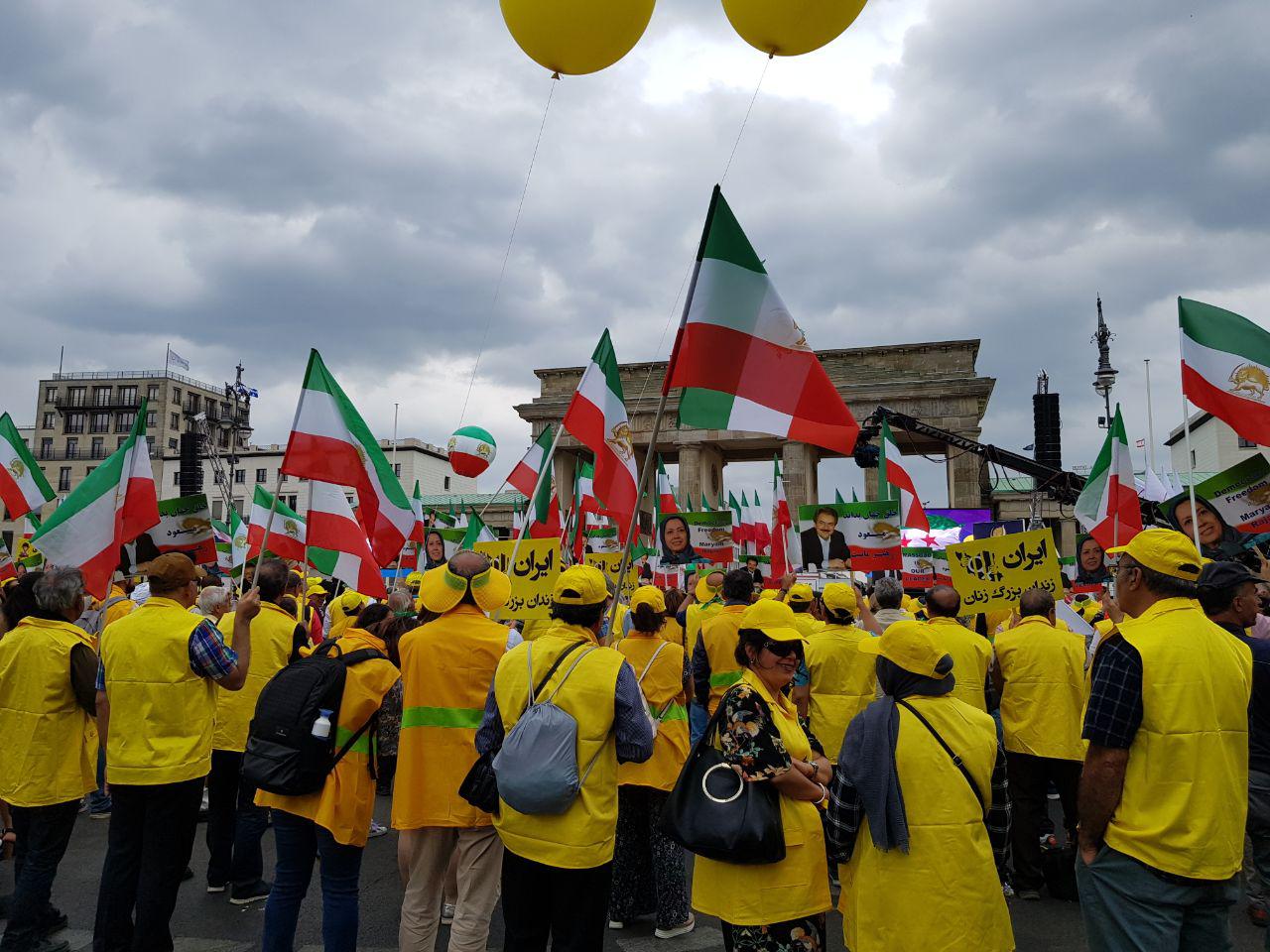 “The mullahs kill physically, but they also kill morally through defamation. We know the people we stand with. These are the people who are fighting with criminals. Don’t get it wrong. You can’t change the truth by writing articles,” she added.

Betancourt also criticized western media for trying to paint a twisted picture of the truth of Iran and depict the IRGC as powerful and popular.

“That is a lie! Not only is [the IRGC] criticized by the people, but they are also facing division in their ranks because they don’t have money to pay their ranks and to finance their war in the middle east. This is the beginning of the end of the mullahs’ regime,” Mrs. Betancourt concluded. 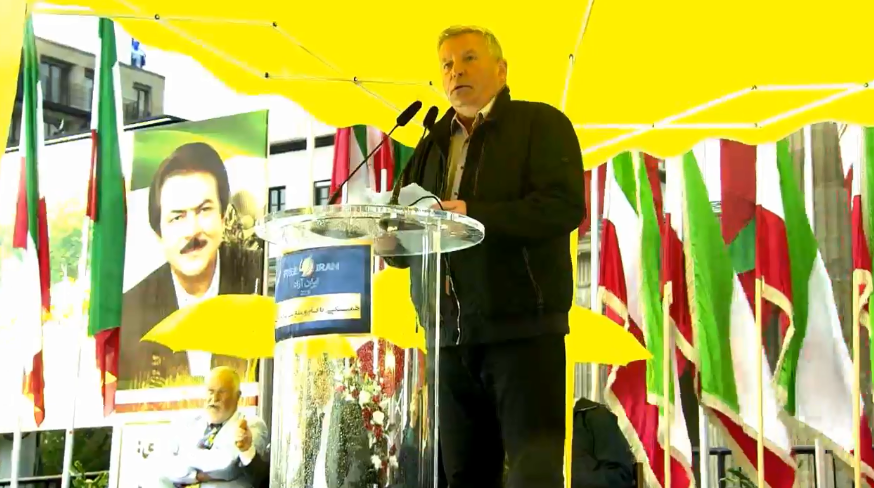 “The Iranian regime is a threat to the world and is trying to acquire a nuclear weapon. We must do whatever we can to prevent the regime from acquiring a nuclear bomb to pose a threat to world peace,” he said.

“War is not a solution for Iran. What can we do? Mrs. Rajavi mentioned in her speech is in the hand of the Iranian people and the resistance who are standing and fighting against this regime. Democracy and freedom can’t be exported to Iran. The people have risen for democracy,” Mr. Nord continued.

Nord recounted the ongoing uprisings in Iran that began last year, with thousands of people pouring into the streets across Iran. 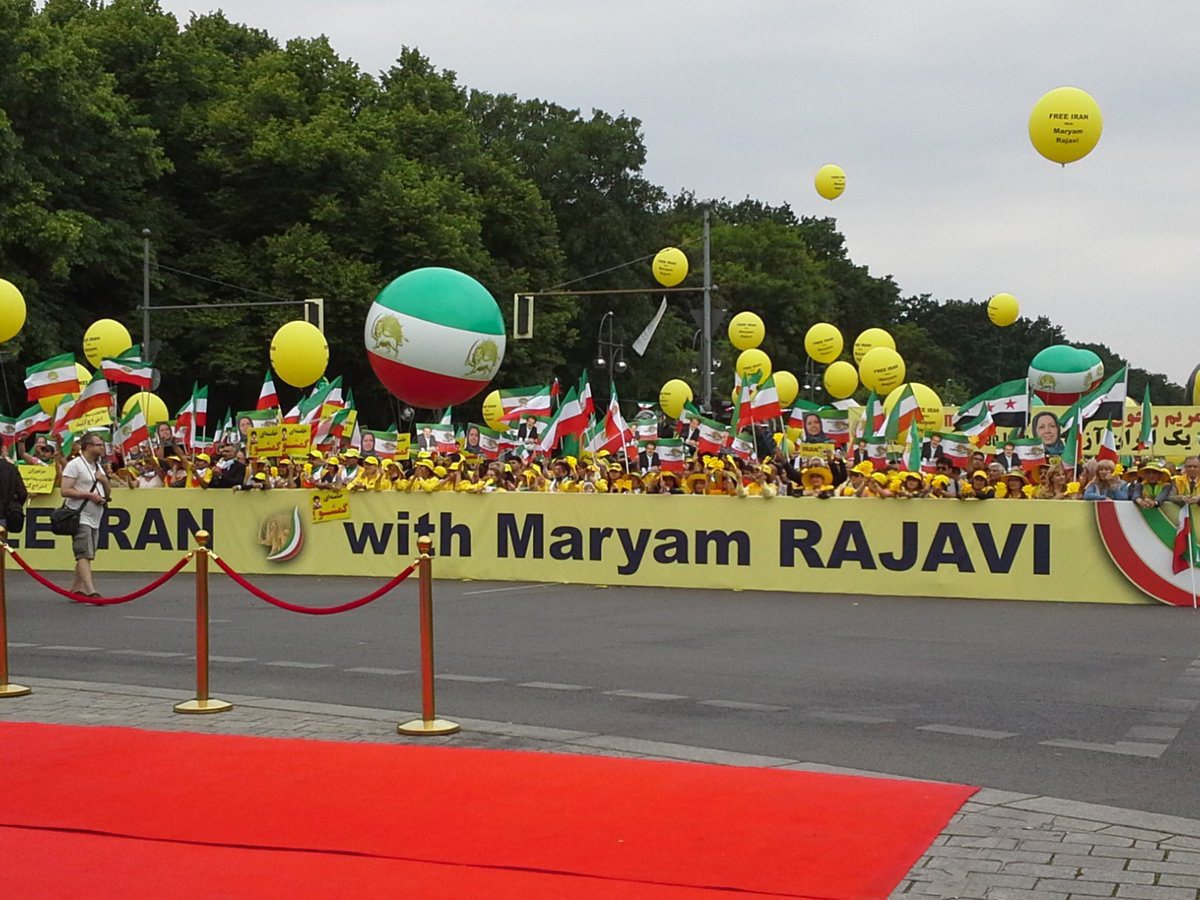 “They take great risks to stand up against the regime. They risk their lives for the freedom of their country. We support them and we condemn the acts of the regime,” the German Bundestag Member continued.

“There are many politicians and journalists who go to Iran and spread lies. We must stand up against these. We must support the will of the Iranian people and their struggle for freedom,” Mr. Nord concluded. 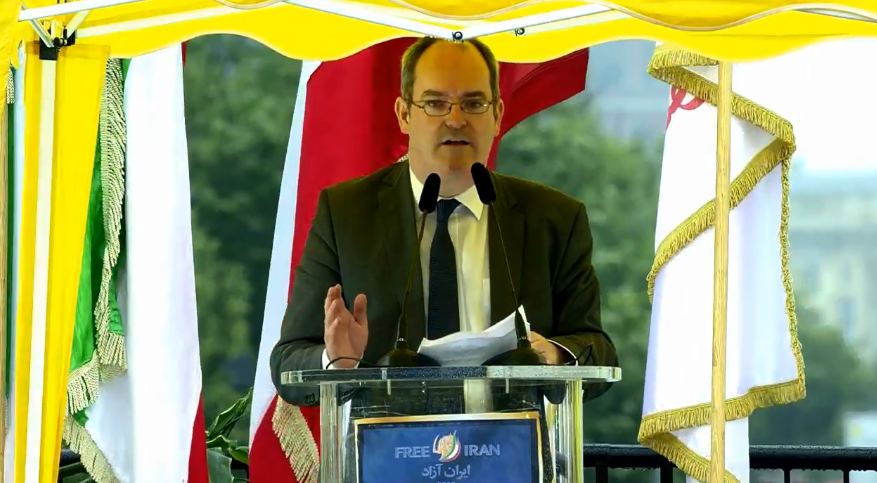 Senator Gerry Horkan of Ireland highlighted the vast support enjoyed by the NCRI across Europe and beyond.

“We are with you and the brave people of Iran in your noble quest for freedom and democracy. Mrs. Maryam Rajavi is a trailblazer for freedom in Iran,” he said.

“We have a cross-party movement in our parliament to adopt a firm policy toward the regime of Iran,” Senator Horkan added.

“We support Mrs. Rajavi’s call on the EU to end the appeasement toward the Iranian regime, especially in regards to its human rights violations,” the Irish Senator continued.

Horkan called for a probe into the 1988 massacre of 30,000 political prisoners and the perpetrators brought to justice. He also called on the terrorist designation of the IRGC. 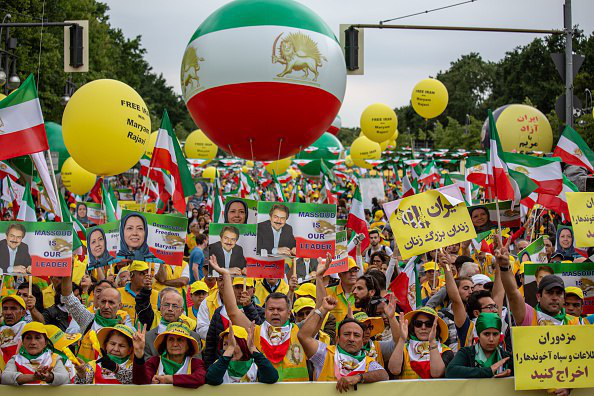 “The regime of Tehran fears your movement and that’s why it conspires against you. You can rest assured that we in the Irish Senate will support your just cause for human rights, democracy, and justice,” Senator Horckan added. 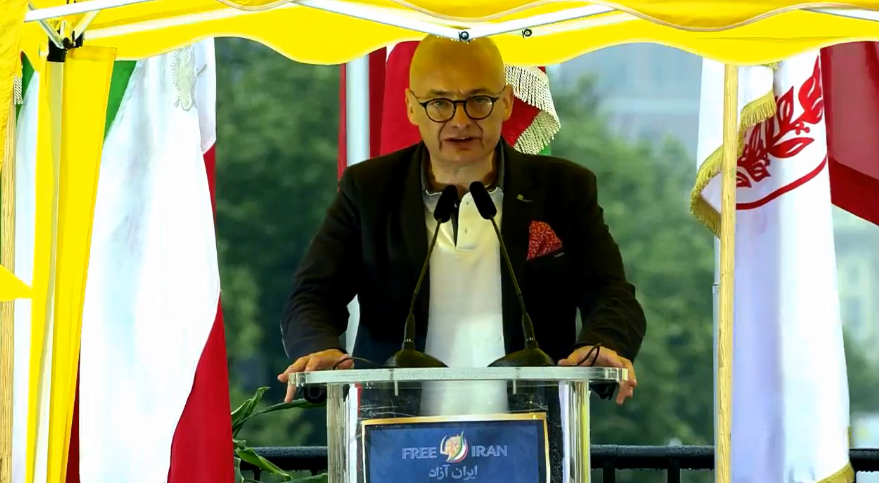 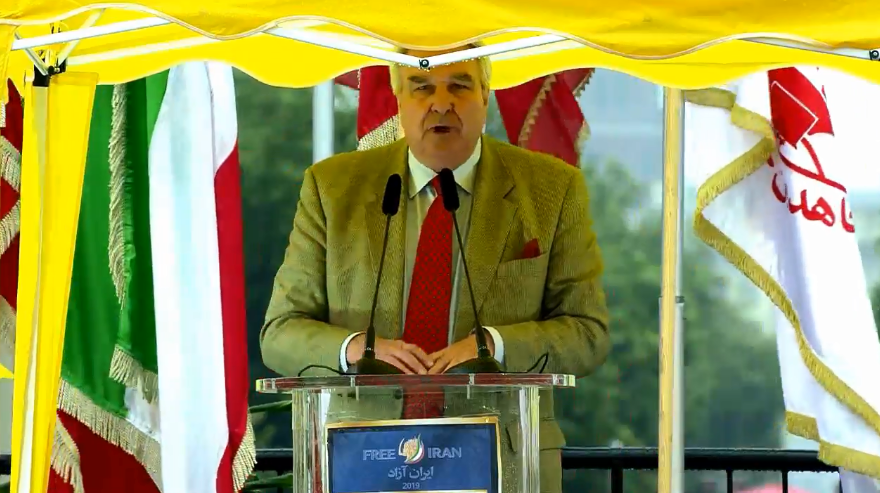 “This regime is answering the demands of the people by suppressing them, said Leo Dautzenberg of the German Bundestag.

“The mullahs have stayed in power through suppression and efforts to acquire nuclear weapons. We support democracy in Iran,” said human rights advocate Christian Zimmermann. 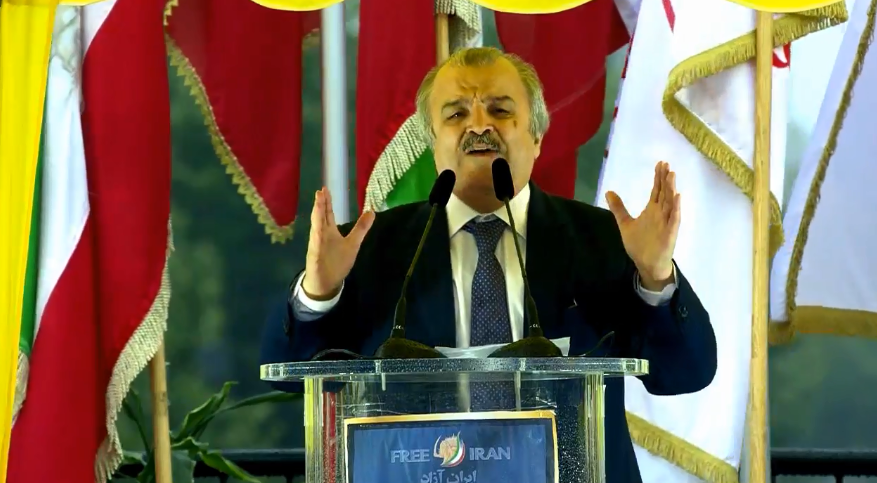 “Massoud Rajavi had called on all Iranians to come to the streets of Europe to show the will of the Iranian people. Your presence here today shows your determination for the overthrow of this regime,” Mr. Mohaddessin said.

“We promise not to give in an inch until the end. You represent the people of Iran who can’t come to the street. You represent their will to establish a free and democratic Iran,” the NCRI Foreign Affairs Commission Chair continued.

“Those who are helping this regime, our message that the time for these games has ended. The true solution for Iran is the overthrow of this regime,” Mr. Mohaddessin concluded.