Brussels - June 15, 2019 - On Saturday, a large crowd of Iranians from around the globe gathered in Brussels, Belgium, for an event in solidarity with the Iranian opposition coalition National Council of Resistance of Iran (NCRI) and in support of the ongoing uprising of the Iranian people. The Brussels march participants also voiced specific support for the People’s Mojahedin Organization of Iran (PMOI/MEK) as the cornerstone member of the NCRI coalition. 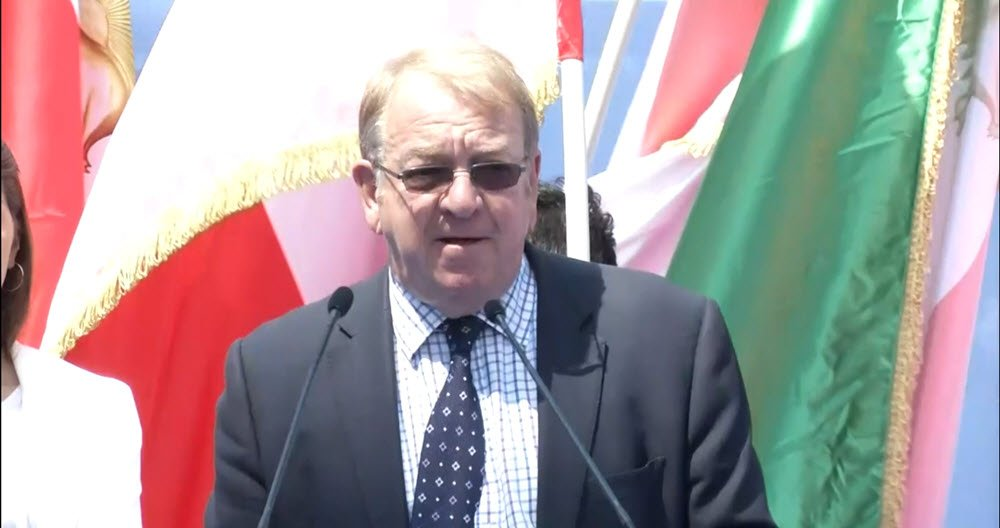 Struan Stevenson, the former Member of the European Parliament, launched the Brussels rally by welcoming all the participants. “We stand shoulder to shoulder with the PMOI/MEK because of our objectives are the same” for Iran to be free, he said. 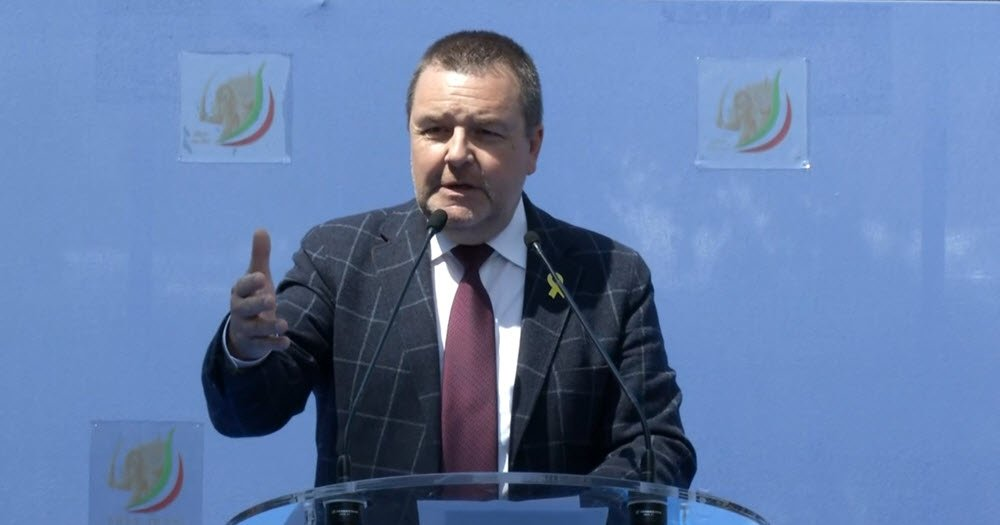 “We saw the Villepinte bombing plot last year, where an Iranian diplomat handed over a bomb to a couple in Antwerp to cause massive casualties. Fortunately, the perpetrators were arrested and are awaiting trial.

“We call on the expulsion of all Iranian terrorists from European soil. We also call the IRGC to be placed on the European blacklist.

“Let’s work together to bring back humanity and democracy in Iran. You are the people of Iran. You want to be part—with your country—as citizens of the international community.” 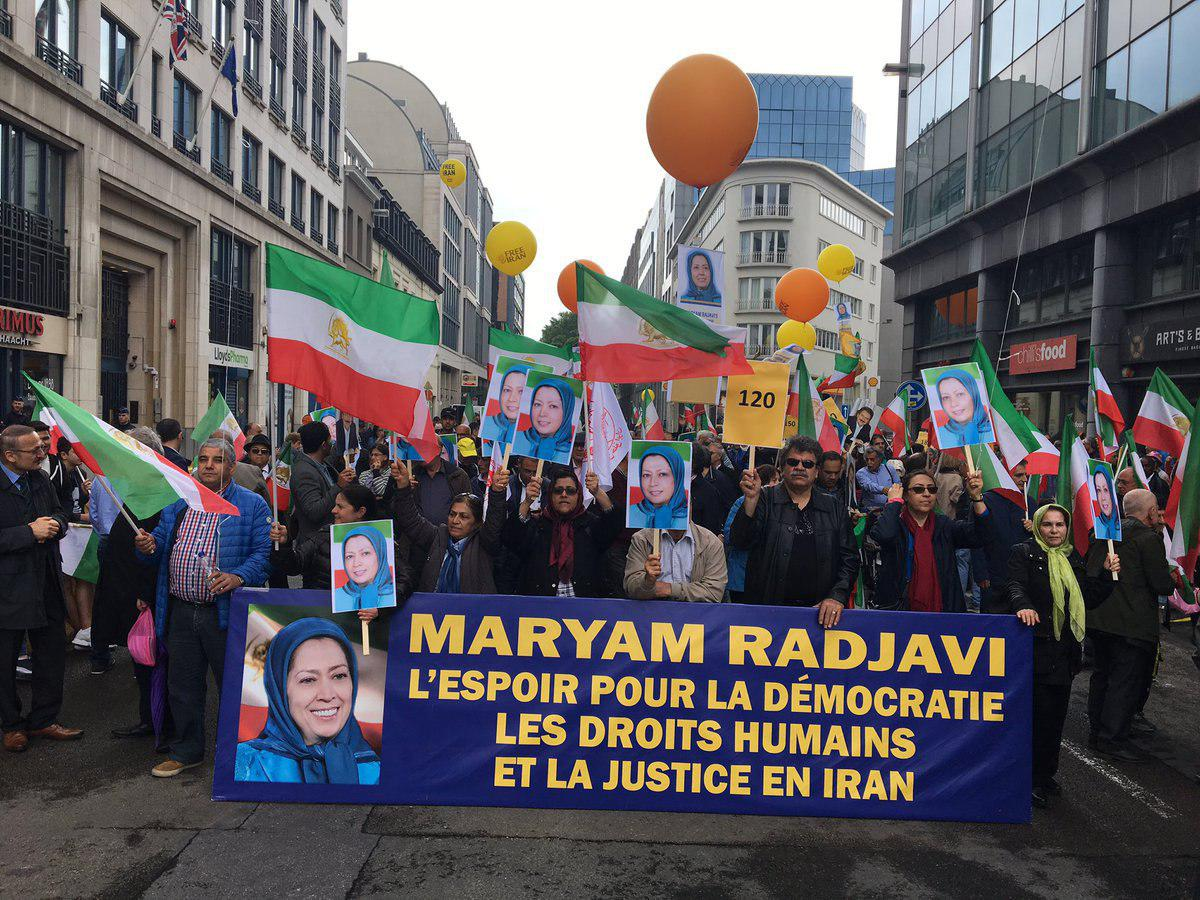 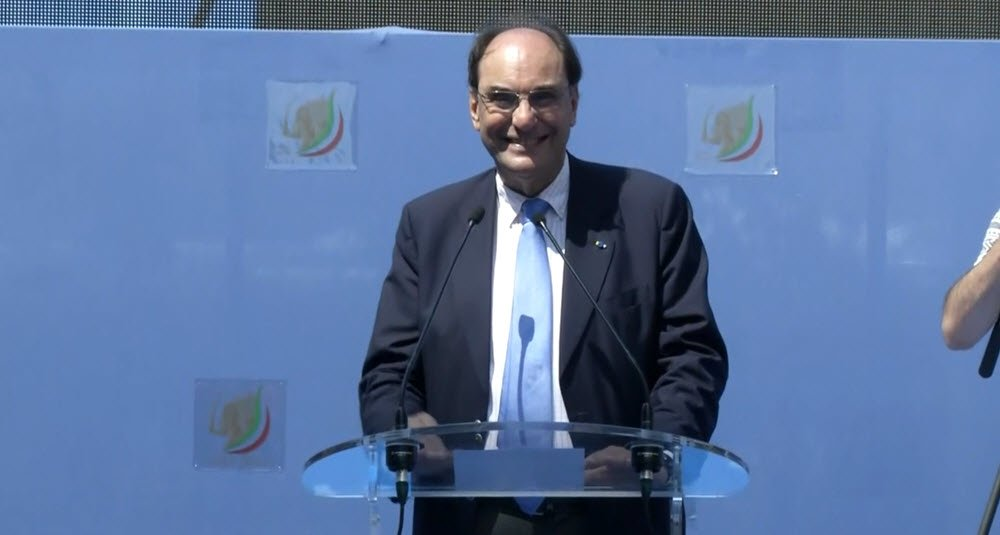 Former European Parliament Vice President Dr. Alejo Vidal Quadras highlighted how the regime in Iran considers the PMOI/MEK as its alternative and goes to great lengths to have this organization annihilated.

“The number of executions in Iran remain extremely high. Human rights defenders are in jail. A 21-year-old Iranian political prisoner was stabbed to death. The death of political prisoners must be condemned and investigated.

“Behind us is the European External Action Service. I hope they’re listening to us now because they have been deaf to the truths we’ve been telling them in the past 20 years.

“11 years ago I had the honor to visit Ashraf I. I will never forget this visit. People in Ashraf 1, 2 and now in Ashraf 3 are an inspiration and example for all of us. They have sacrificed everything for freedom in Iran. They have given new meaning to our lives.

“The theocratic dictatorship is doing everything it can to eliminate its opposition, especially those who are now in Ashraf 3, including terror plots. The regime is also recruiting agents to carry out a massive misinformation and smear campaign against the opposition.

“This place where we’re holding the rally is a historic place. 10 years ago, right here, we celebrated the removal of the PMOI from the European blacklist. I have gone to many events, “many political issues in my life. But I remember the day of this big victory as one of the happiest days of my life.

“In the years that followed, we gathered for the safety and security of the residents of Camp Ashraf and their relocation to a safe haven. All of these efforts were done under the inspiring leadership of Mrs. Maryam Rajavi. I also salute Massoud Rajavi. I hope to one day meet him in a free Iran.” 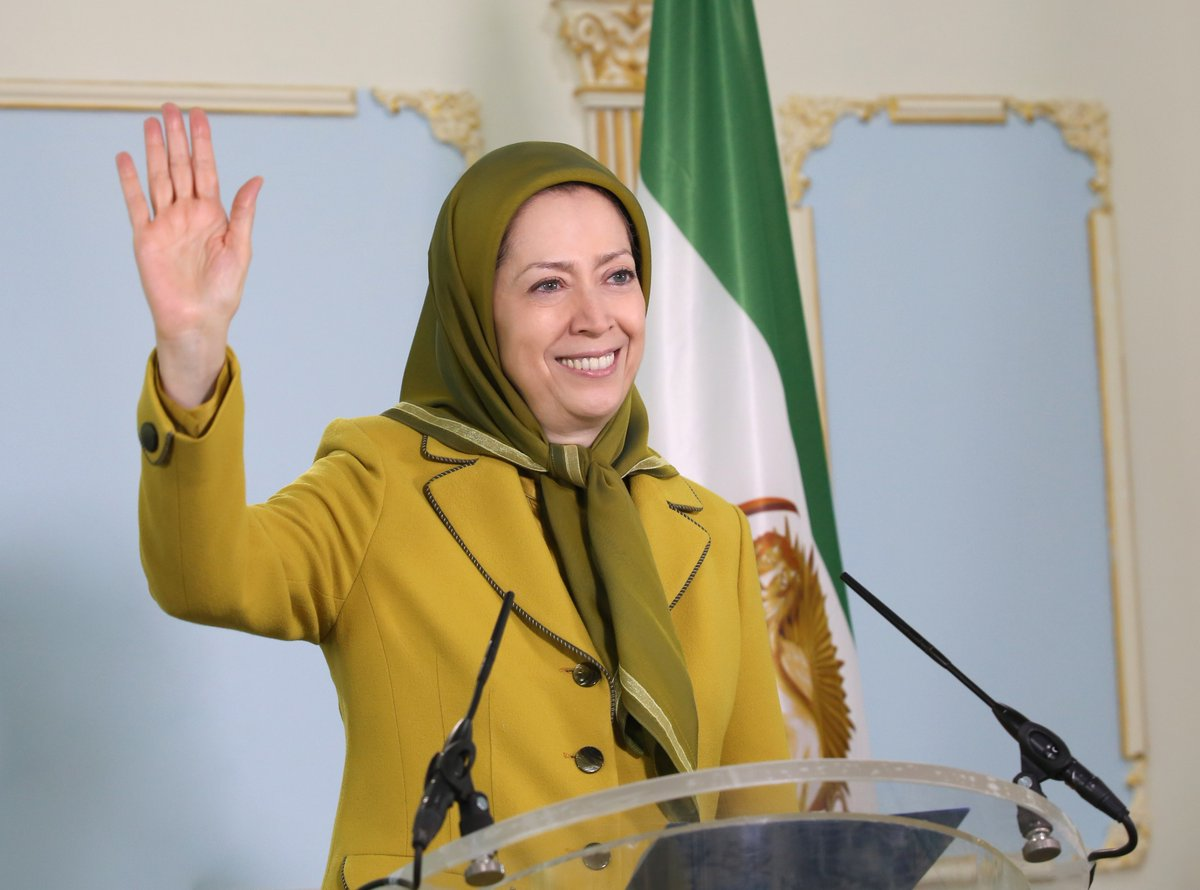 “The decadent regime of the mullahs is surrounded by infuriated people fed up with the status quo, to the extent that just like the final days of the Shah’s regime,” said Mrs. Maryam Rajavi, president-elect of the NCRI, in a televised message to the event. Mrs. Rajavi underlined that while rivaling factions within the regime try to blame each other for the economic woes of the country, for the people, there’s no difference and they are fed up with the regime in its entirety.

“The regime’s proponents and those who have interests in perpetuating its rule, encourage giving concessions and appeasing Iran’s ruling murderers projecting concern about the outbreak of war,” Mrs. Rajavi reminded, stressing that the past 40 years have proven the failure of this policy 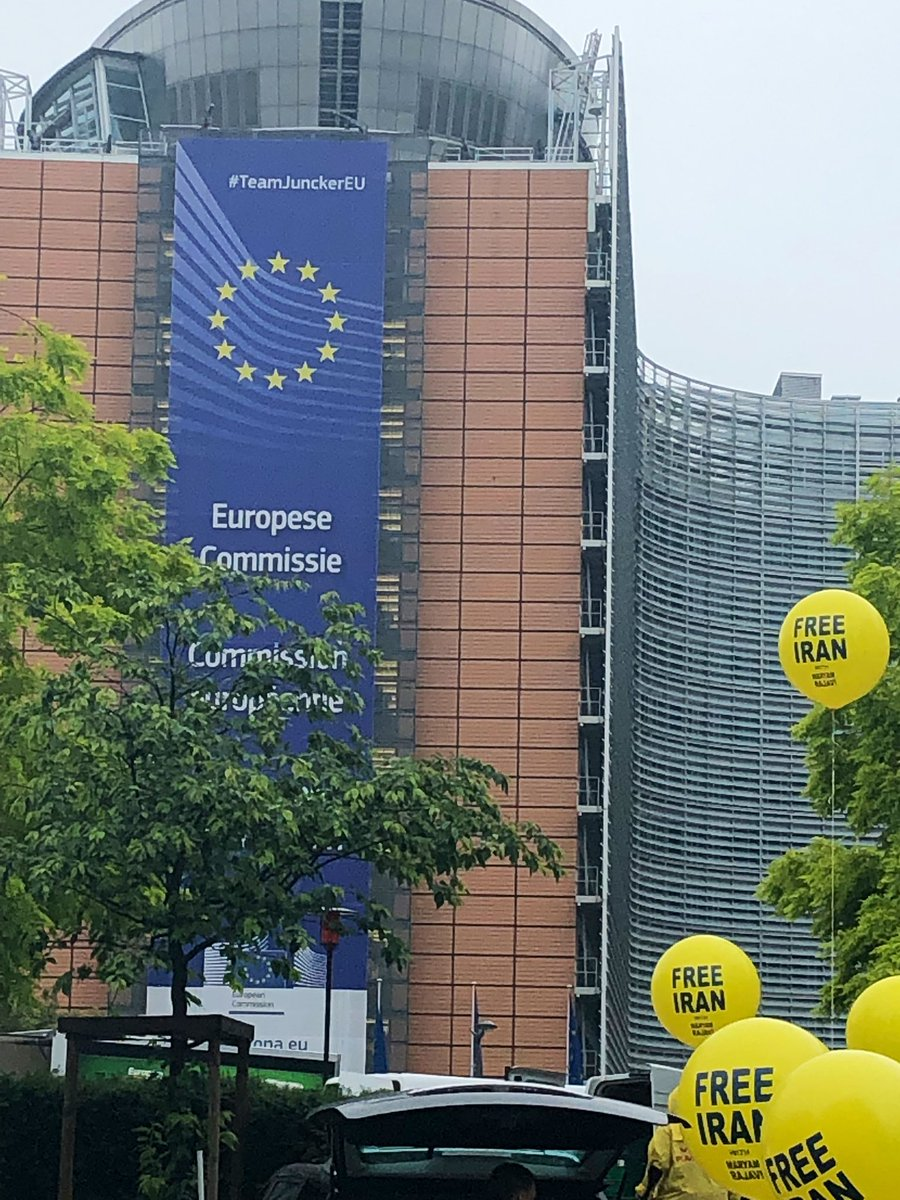 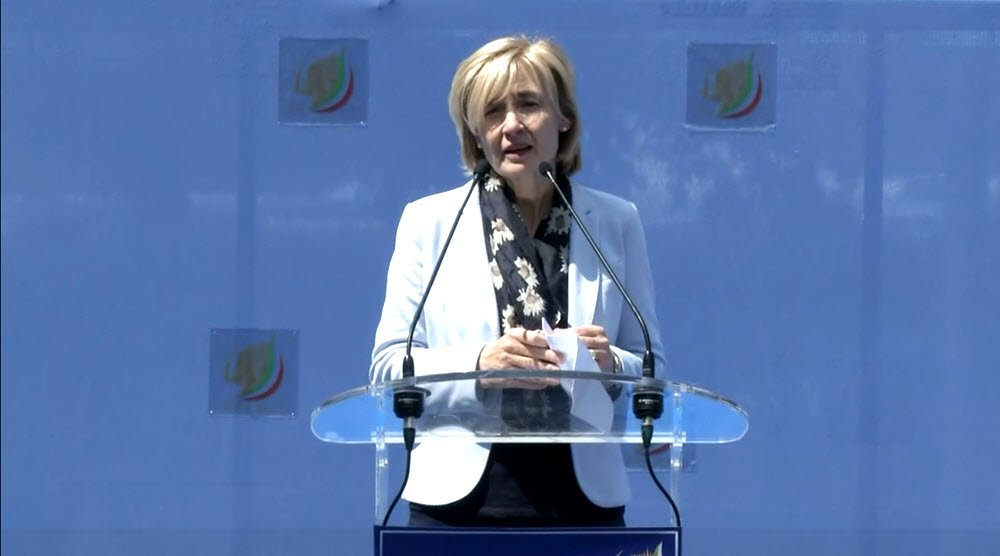 Belgian MP Françoise Schepmans highlighted women’s rights violations in Iran and how the mullahs’ regime is utterly terrified of the role women play in Iran’s struggles for freedom.

“Over the course of several parliamentary sessions in Belgium, we tried to uphold the rights of women in Iran. The mullahs are very fearful of women.

“We are very clear in Belgium that human rights are an absolute priority. Democracy needs to be held in Iran as well as the respect of the rights of women and men.

“Thank you for your tenacity and your presence here today. Democrats in Iran must feel supported and know that we are fighting alongside them.” 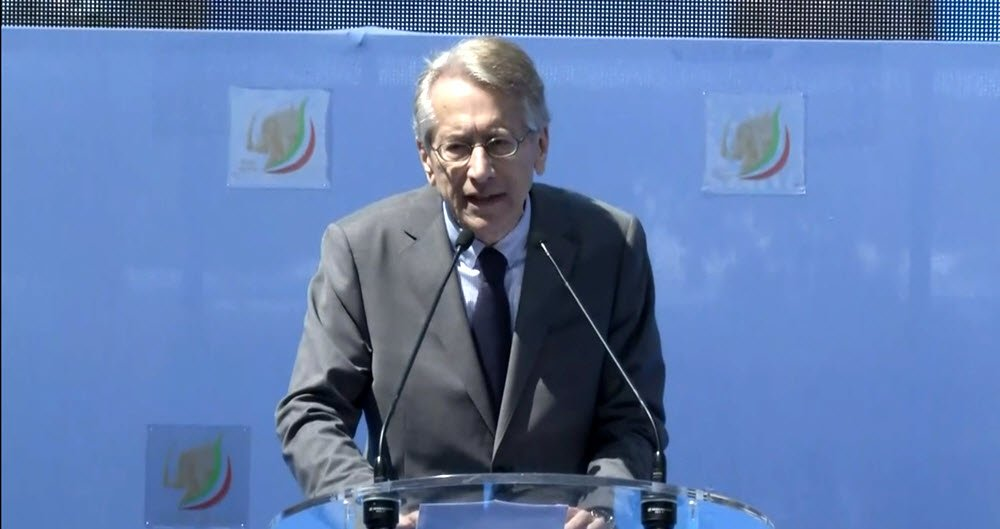 Former Italian Foreign Minister Giulio Terzi emphasized on the need for Europe to set aside its appeasement approach vis-a-vis Tehran and adopt a firm policy of sanctioning and blacklisting the Iranian regime’s malign entities.

“It is important in this critical juncture of what is happening in the Persian Gulf today that we stand here and support the rights of the people of Iran,

“Political conditions in Iran, especially in the past year, since the great uprising of the end of 2017, have changed profoundly. The regime is approaching its final end. The people are suffering from economic conditions and lack of freedom. But their protests continue every day with enormous sacrifice and courage. They’re growing larger every day.

“The MEK and NCRI, the main force of opposition against this regime, are advancing every day. Yet still, some in Europe pretend there’s no alternative to the regime. There is a viable alternative. It is the National Council of Resistance of Iran.

“All the Iranian people know that the oil money goes into the pockets of the mullahs and is used for terrorism and repression.

“Also, people do not oppose the black-listing of the Revolutionary Guards (IRGC).

“Also, the Iranian regime tries to portray the Iranian people as hating the MEK. The regime spreads false information in this regard.

“Unfortunately, some European institutions contribute to the dissemination of this false information.

“European governments must designate the regime’s Ministry of Intelligence and Security (MOIS) as a terrorist entity all Iranian diplomat terrorists.

“Iran must be contained every minute in this crisis, in the upheaval it is fueling in the region.” 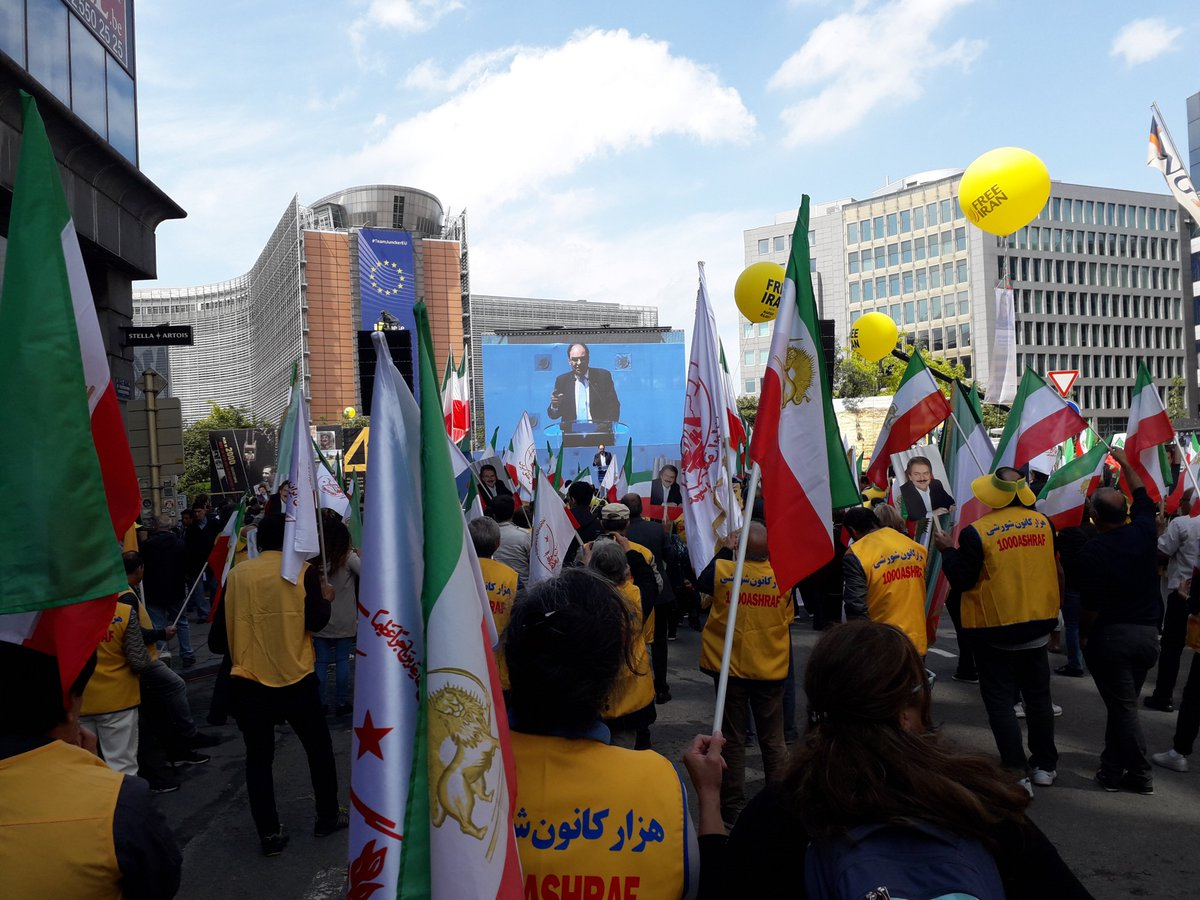 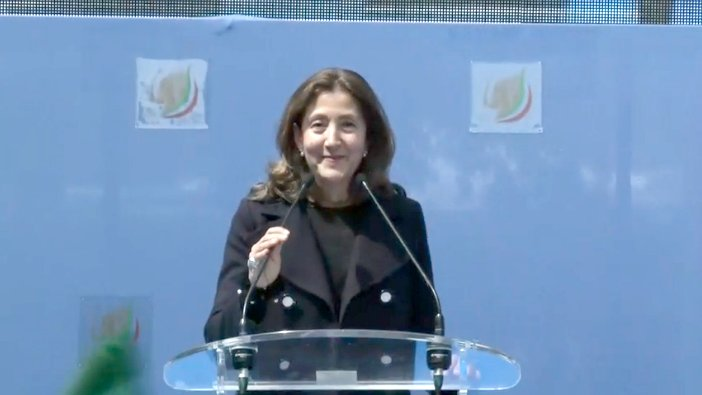 “Today is a day riddled with tension because of what we’re seeing in the Middle East and the Persian Gulf. There is tension between the IRGC who are attempting to intercept oil shipments to try to demonstrate to the world the risks of continuing to try to free Iran.

“What’s dangerous is not confronting the regime. The danger comes from kneeling before the regime. This regime has massacred thousands of people because they dared to speak out against the mullahs.

“What is immoral at the end of the day is the fact that we are sitting on our laurels and do nothing. I’m saying this in front of the European flag. Our justice is scared to condemn the men who were behind a plot to assassinate thousands of people in Paris. We are not holding and respecting our morals. We should be defending human rights activists here and across the world.

“The Iranian regime not only terrorizes dissidents inside Iran but also exports terrorism abroad against its opponents.

“Searching for reform in Iran has resulted in more weapons and terrorism in the Middle East. This is what is dangerous. The United States has decided to turn this policy on its head and deal with the mullahs’ regime with an iron fist.

“We want to tell our leaders in Europe that we don’t want a nuclear agreement. What we want is the terms of [Iranian regime Supreme Leader Ali] Khamenei stepping down. We are united and we are walking in the direction to pave the way for Iran’s freedom.” 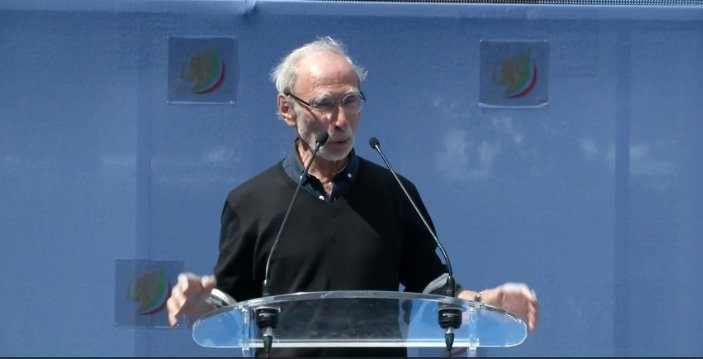 Eric David, Professor of International Law at the Free University of Brussels stressed on the necessity to hold the mullahs’ regime accountable for their human rights violations.

“When you see the figures, 120,000 murders since 1981, for political reasons, for religious reasons—a lot of these activists were tried on religious grounds.

“These executions can be legally and technically classified as crimes against humanity. If you’re killing someone because of their faith or because they’re part of an ethnic minority, it can be classified as genocide. These are violations that can be tried in any court across the world.

“Every government and state must pursue and try the Iranian regime for these crimes. The perpetrators of these crimes must be tried before a court, and I’m sure that justice will be rendered.” 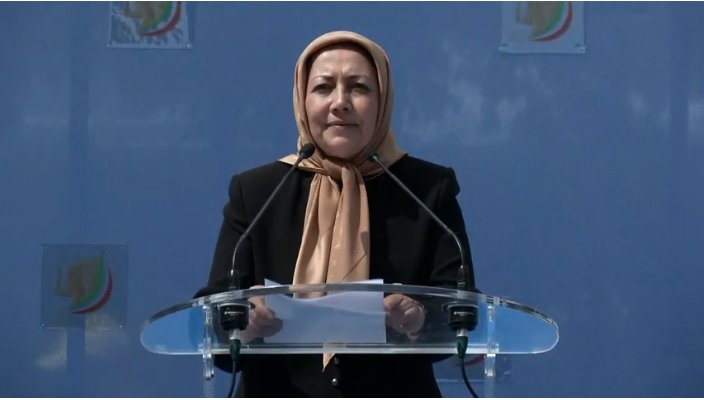 NCRI Women’s Committee Chair Sarvnaz reiterated the demands of the rally participants from the international community in regards to the Iranian regime.

“This is a protest against the regime’s warmongering and terrorism, and to support the resistance units inside Iran.

“We want to reiterate the following:

“The Iranian Resistance has been paying the price of saying no to this regime for the past 40 years. We will continue to do so.” 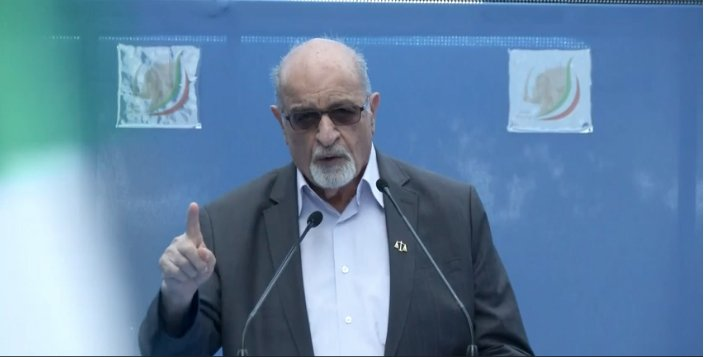 Syrian human rights activist and former judge Haitham Maleh highlighted the terrorist-nature of the mullahs’ regime and how Tehran has wreaked havoc across the region for the past 40 years.

“The Syrian regime is imprisoning and torturing prisoners with the blessing of the Iranian regime. The Iranian regime wants to burn the whole region to the ground. They think no one can stop them. The revolutionary forces of the region must come together against the regime. 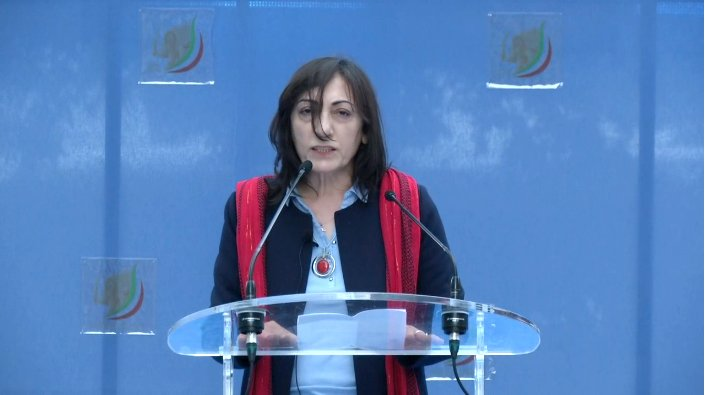 NCRI Member Zinat Mirhashemi emphasized on the fate of the entire region relying on the overthrow of the mullahs’ regime in Iran.

“The regime is using different excuses to arrest anyone that is pursuing activities against it. The regime is plundering the people’s wealth to spread chaos and war in the region. The majority of the Iranian people want regime change and they know that there’s no hope for change in their living conditions while the regime still stands.

“The Iranian dictatorship neither wants nor can respond to the needs of the people, which is why there is an increasing number of protests across the country.

“Only the people of Iran and their organized resistance can bring democratic change to Iran. This is totally different from war and appeasement.

“Without the overthrow of the Iranian regime, none of its internal factions can fulfill the needs and demands of the people. We call on the solidarity front against the regime and support the establishment of a secular and democratic state.” 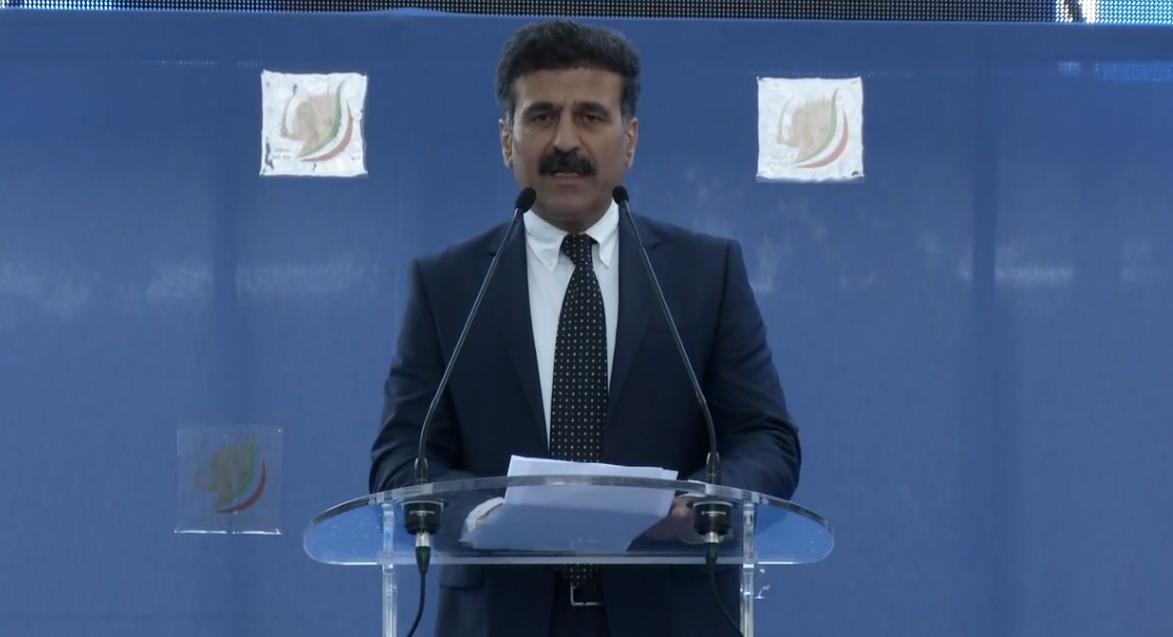 Kak Baba Sheikh Hosseini, Secretary-General of the Iranian Kurdistan’s Khebat Organization, highlighted on the regime’s oppressive nature, how all Iranians want this regime to be overthrown and the reality that the mullahs cannot be negotiated with.

“We are here to send our message to the regime and the international community that this uprising will continue until we overthrow this regime and establish a state founded on democracy, freedom, and separation of church and state.

“We support friendship with all parties in the Kurdistan region who support the overthrow of the regime and denounce any sort of negotiations with this regime. This is a regime that spread terrorism. The U.S. now knows that this regime is the main force of terrorism in the region and across the world.

“The Iranian regime oppresses the people, especially Kurds, under different excuses. The regime has also imprisoned activists and has killed several political prisoners. The international community must explain how they plan to appease a regime that is making the region unsafe with terrorism.

“We ask the international community to stop appeasing this regime and to recognize the resistance movement of the people.” 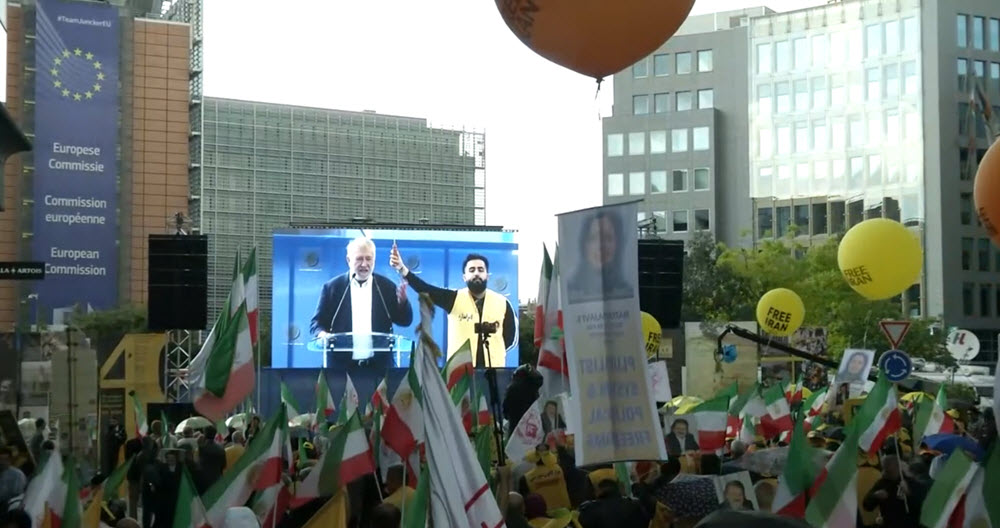 Pierre Gallant, former President of the World Organisation Against Torture (OMCT) - European Branch, expressed his support for toppling the mullahs’ regime and establishing democracy in Iran.

“We’re here to tell the EU that it must respect its principles and support the struggle against the mullahs’ tyranny. We’ll stand hand in hand with the Iranian people to remove the dictatorship and establish democracy.