Europe finally determined to take a stance against the Iranian regime?

The mullahs' regime terrorism around the world and in Europe

While the Iranian regime was counting on Europe’s support in the face of new U.S. sanctions and was developing its relations with the European Union, the January 9 sanctions by the Council of the European Unions—representing the executive governments of the EU’s member states—against the Iranian intelligence ministry was a wake-up call and slap in the face of the mullahs.

Years of appeasement and petrodollar-first policies by some circles in the European Union—currently incarnated in EU’s High Representative for Foreign Affairs and Security Policy Federica Mogherini—led the Iranian ruling mullahs to believe that they had a free hand in conducting terrorist plots on European soil without ramifications.

The Iranian regime’s record of terrorism around the world and in Europe is as old as the Islamic Republic itself, but a flux of Iranian terrorist activities on European soil over the past few years is particularly concerning.

Last year in June, Iranian agents plotted to bomb the annual gathering of the main organized Iranian opposition group, the National Council of Resistance of Iran (NCRI), in Paris. Two Iranian agents disguised as members of the opposition were arrested in Paris, while an Iranian diplomat and a high-ranking member of Iran’s Quds Force, responsible for foreign terrorist activities, was later arrested in Germany. The high-ranking Iranian official, Assadollah Assadi, who was at the time a diplomat in Iran’s embassy in Vienna, was later extradited to Belgium and awaits trial.

Last year, the Iranian intelligence ministry also plotted to assassinate an Iranian Arab dissident in Denmark. The attack was thwarted, and Denmark publicly accused Tehran of plotting the attack.

In 2015 and 2017, local thugs hired by the Iranian intelligence ministry assassinated two other Iranian dissidents in the Netherlands. Dutch officials have publicly connected the attacks to the Iranian regime.

While the Iran lobby in Europe and around the world is still trying to save the ruling criminals in Iran by normalizing the endless stream of crimes and misconduct coming out of the Islamic Republic, it seems that cooler heads, who put their country’s long-term interests before political short-term gains are prevailing. 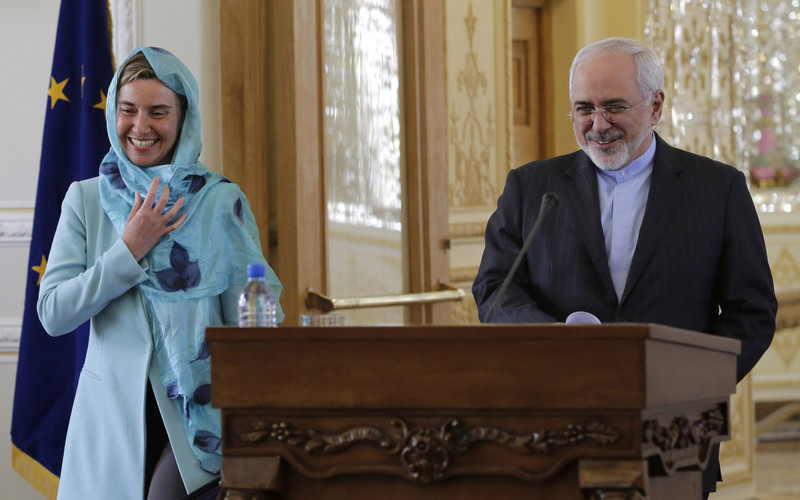 EU foreign relations chief Federica Mogherini with Iranian foreign minister Javad Zarif during her visit to Iran in 2016. During this period, when the nuclear deal was reached with the P5+1 countries and sanctions against Iran’s economy were lifted, Iranian terrorists were stepping up their nefarious activities around the world.

Catching the Iranian regime four times with a smoking gun just on European soil over the past few years while the so-called moderate president Hassan Rouhani was incumbent makes it extremely difficult for apologists to paint a reasonable picture of the ruling mullahs in Iran.

Especially when all four attacks were planned or carried out before the current U.S. administration pulled out of the nuclear deal. How can you honestly defend a deal when its inevitable outcome was an emboldened terrorist state that—enriched by petrodollars—increased its terrorist activities around the world instead of investing in its collapsing economy and impoverished people?

Comments by Iranian officials after Europe’s latest decision to firmly respond to Iranian terrorist activities on its soil clearly show the surprise and shock they feel.

Hossein Amir-Abdollahian, former Deputy FM for Arab and African Affairs, and current assistant to Iranian parliament speaker—who by the way is very close to the Quds Force and IRGC—warned Europe about a “shocking” message and said: “The west needs to face a “shock” so it knows that we won’t stay in the one-way tunnel of the JCPOA at any cost. Currently, Europe, which has become a refuge for terrorism and the hypocrites [the Iranian regime’s official term for the PMOI], needs to receive a reasonable, wise, but [also] ‘shocking’ message.”

Going through the official comments about Europe’s recent response to Iranian terrorist activities on its soil—which was quite mild considering the situation—one can only conclude that the JCPOA did work but only in contrast to its original intentions by emboldening an already expansionist regime that considers its terrorism on the streets of Baghdad and Beirut its strategic depth that helps it to avoid an internal crisis that has accumulated over four decades through mismanagement, blatant corruption, and nepotism.

But it also shows that the Iranian regime still hasn’t learned that Europe isn’t just made up of appeasers.

It wasn’t just the fanatic German Nazis who created the world war two. Chamberlin and his apologists are as much responsible for paving the way for the rise of the Nazis and the ensuing catastrophe.

And as history shows, after Chamberlin comes Churchill.