American Thinker, September 27, 2017 - The plunder of Iran's wealth by the ayatollahs, who claim to be Muslim leaders, has left almost nothing for the Iranian people.  Under their rule, Iran has grown poorer and its citizens more powerless.  Only a tiny rich section remains in the country, comprising mullahs and their families.  Make no mistake: these rulers are rich because they have usurped the entire wealth of the rest of the country.

How did this come to pass?

Over the past two decades, mullahs established lucrative credit institutions in Iran, which eventually spread out to a network of branches.  These institutions were launched with political backing and as such were capable of circumventing any law.  Yet they had the appearance of lawful, legal institutions.  Like legitimate banks, they solicited and took deposits from the people, yet because of their political muscle, they were eventually able to plunder citizens' savings with impunity.

Probably the worst example of this was called the Caspian Credit Institution.  It had links with Iran's hated Revolutionary Guards and Supreme Leader Khamenei's office, which enabled the institution to get permits from the regime's central bank, which lacks any sort of independence.

More than five thousand institutions of this kind were authorized by the Revolutionary Guards and the regime's police-state officials.  With the help of public broadcasting and state media, the institutions launched years-long advertising blitzes, claiming to be credible and authorized by the central bank, in order to gain people's confidence. 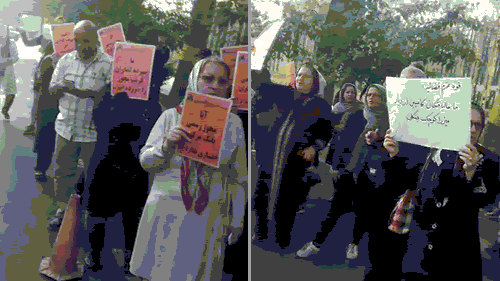 It was misplaced because eventually, these deposits were taken from those who trusted the institutions, leaving the people destitute.  Coming from such a large network of banks, the impact was felt across society, impoverishing many. 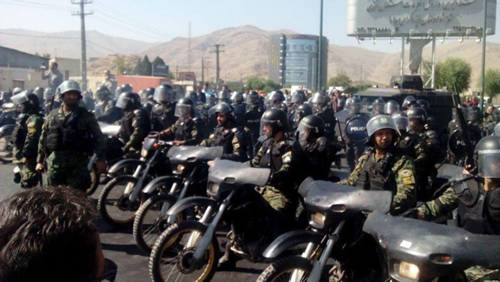 Just this week, in Tehran, hundreds of people who were not able to withdraw their deposits from Caspian Credit Institution staged a protest, gathering outside the regime's judiciary office in the capital, chanting angry slogans on Sept. 24, 2017.  One depositor who denounced "being cheated by the central bank," said in this regard that the central bank first gave an official, unconditional permit to the institute.  The institute then advertised across the city and encouraged people on state TV to make investments there.  And finally, the people were robbed.

At the protest, some of the slogans heard were as follows:

The plundered shareholders said they would continue with their sit-in demonstration until their money is returned to them by the IRGC-backed Caspian Credit Institution.

It wasn't the only protest against Caspian, whose network was national.

In Rasht, a large city in the northern part of Iran, angry plundered shareholders shouted: "Let go of Syria; think about us."

In Kerman, a large city in the eastern part of Iran, the protesters set up a symbolic table with nothing on it to show their plundered lives.  The children were holding placards with slogans addressed to Iran's rulers such as "Let go of Myanmar; think about us."

In the last several months, people who lost their money to the Caspian financial firm have held continuous rallies across Iran.  It's emblematic of the financial ruin seen in all parts of Iran – not just from bank malfeasance, but from failures in the industry as well.  Plunder in Iran is not confined to banks.

In a separate event last Wednesday, on Sept. 20, the National Council of Resistance of Iran reported that 1,800 workers of the Azarab factory in Arak gathered there for a fourth day, protesting the company's failure to pay their salaries and benefits for six months.  The regime's repressive forces attempted to disperse these workers by firing tear gas, shooting into the air, and beating the workers with clubs.  The enraged workers resisted, taking some of the regime goons' clubs. 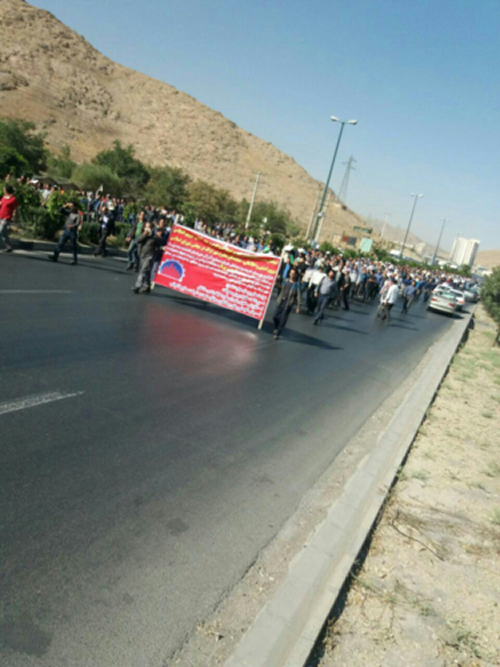 Workers protest against the lack of money and poverty

Then the workers of this factory gathered at the entrance of the Tehran-Arak road Monday and closed the road.  Anti-riot motorized and infantry guards, plainclothes police, and regime guards beat them in a brutal attack and arrested dozens with their siege.

The enraged workers confronted the repressors with slogans such as "Innocent workers must be freed" and "Mercenary, go away" and "Jerk, jerk."

A number of detainees were freed by workers' efforts, and others were transferred to unknown locations.  The workers of the factory, one of the major manufacturing units of the country's largest industrial hubs in Arak, have so far been protesting for their right to earn a living.  These workers are also worried about being unemployed because the factory works at only 20% capacity. 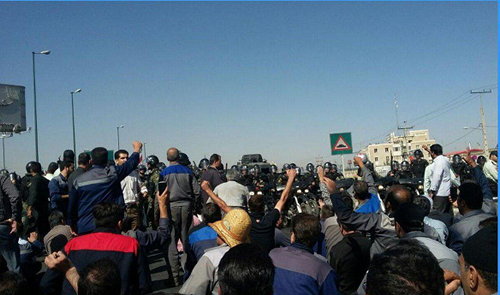 The workers of Hepco Corporation protest protests and engage with police officers.

On Monday, workers from the Arak's Hepco  Company also gathered on the rail track route of Arak-Tehran.
Some 900 workers of the factory were not paid salaries since the previous winter.
Hepco is one of the largest manufacturers of heavy equipment, such as road construction, mining, and agriculture machinery, in the Middle East.
The factory has been in operation for 42 years and is a large, specialized factory. Under the guise of "privatization," it was handed over to the regime's inner circles and agents and has undergone catastrophic decline over the past 10 years.

Hassan is a human rights advocate, specializing in political and economic issues relating to Iran and the Middle East.