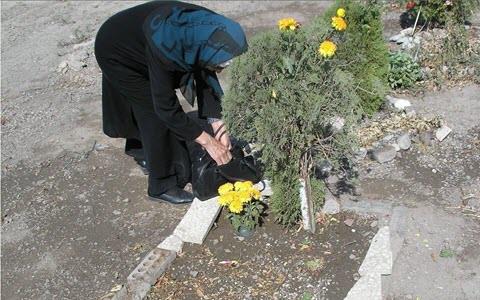 At least “a dozen political prisoners killed during a wave of mass extrajudicial executions in August and September 1988 are buried” in the mass grave.

A footage obtained by Amnesty International “shows the site is gradually being buried beneath piles of construction waste” after a construction near the area began earlier this year.

“Bulldozing the mass grave at Ahvaz will destroy crucial forensic evidence that could be used to bring those responsible for the 1988 mass extrajudicial executions to justice. It would also deprive families of victims of their rights to truth, justice, and reparation, including the right to bury their loved ones in dignity. By joining Amnesty International’s campaign, people can help to press Iran’s authorities to stop the imminent destruction of the site,” said Philip Luther, Amnesty International’s Research and Advocacy Director for the Middle East and North Africa.

He added: “Instead of desecrating the mass grave with piles of rubbish and waste and further tormenting families, who face repression for their efforts to protect the memory of their loved ones, the authorities should be upholding their duty to preserve all Iran’s mass grave sites so that investigations can be carried out into the 1988 extrajudicial executions and other mass killings.”

The Iranian regime executed more than 30,000 political prisoners, the overwhelming majority of whom were activists of the People’s Mojahedin Organization of Iran (PMOI/MEK), upon a direct fatwa by Khomeini in July 1988.

The victims were buried in secret mass graves. The 1988 massacre was described as the worst crime in the history of the Islamic Republic by the late Hossein-Ali Montazeri, the heir apparent of Ruhollah Khomeini, the founder of the regime, at the time.

Many perpetrators of this crime currently hold high positions within the regime.

Hassan Rouhani, the president of the Iranian regime and many of his cabinet’s principal figures held positions of influence in the summer of 1988 and were well aware of the massacre. Some were prominent participants in it, and indeed Rouhani’s first-term Justice Minister, Mostafa Pour-Mohammadi, was one of four members of the Tehran death commission.

Last month Pour-Mohammadi was replaced by Alireza Avaie. He filled a similar role on the death commission in Khuzestan Province, the same province in which a mass grave is being destroyed.

A few days after the replacement, upon an order by Ali Khamenei, Pour-Mohammadi was appointed as an advisor to head of the Iranian regime’s judiciary Sadegh Larijani.