The situation of nurses employment and occupation in Iran merits attention.

IRAN, August 28, 2017--According to the latest figures compiled on the number of protests taking place in Iran, an average of 20 protests take place in Iran every day. One of the sectors constantly staging protests are the nurses. Despite their heavy-duty involving a lot of work, pressure and harms, the majority of nurses in Iran do not have official employment. They work on temporary contracts. They are offered a small salary and even that small salary is not regularly paid.
The latest protest by nurses was in Boushehr on August 24, 2017, where they protested non-payment of eight months of their past due salaries. Women nurses in Semnan also staged protests on July 16 and 17, 2017, outside the Governor's Office in this city to demand 11 months of past due salaries. The nurses and staff of one of the hospitals in Yasouj also staged a protest on May 30, 2017, demanding six months of non-paid salary. Similar protests have been staged all across the country throughout the year.
The Vice-President of the Nursing Organization had to acknowledge that while nurses are forced to work overtime, their overtime fees had not been paid for between six to ten months.
Nurses are not paid while regime officials have admitted that in the past 1.5 years, at least 16 educated nurses between 25 and 45 years of age have died at their workplace due to pressure caused by working different shifts, leading to heart stroke and other fatal problems.
Five months earlier, the same official announced that 10 nurses had died at work. This means that in only five months, six nurses have died at the workplace due to pressure at work. It should be noted that the figures officially announced by Iranian officials have to be considered to be the minimum.
One of the vice-presidents of the Nursing Organization, Dr. Jaleh Ezzati, admitted that there is a shortage of nurses in hospitals. She said, “In Iran, every 15 patients have one nurse, while by the international standards every nurse has to attend to one or maximum of four patients.” 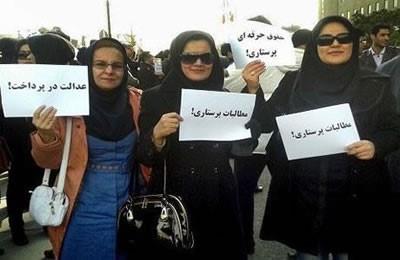 According to some reports, there are at least 11,000 unemployed nurses in Iran. The President of the Nursing Organization has admitted that some 40,000

According to some reports, there are at least 11,000 unemployed nurses in Iran. The President of the Nursing Organization has admitted that some 40,000 unemployed nurses have registered at the organization’s website who are not willing to continue their work due to lack of job security. The official pointed out that there is an increasing absence of government support for nurses, and they have to endure tremendous pressure at work while receiving small salaries.
The Vice-President of the Nursing Organization has also indicated that there is a wide gap in the salaries of nurses and doctors. “The difference in the salaries of a nurse and a doctor in 99 per cent of countries, is three folds at most. In Iran, however, the difference is 100 folds. We have even had payrolls that are 500 times greater than those of nurses.”
At the same time, the number of graduates of nursing is not small, but there are many who do not get employment licenses after graduation. This is why many nurses decide to migrate despite rampant shortage of nurses in the country.
Nevertheless, we see that instead of compensating for the shortage of nurses in hospitals, official employment of educated nurses, eliminating the wide gap between doctors and nurses’ salaries, paying benefits for harmful jobs, and issuing license for the employment of educated nurses, the Ministry of Health has offered a plan according to which hospitals with sufficient facilities are allowed to train nurses. The plan of the Ministry of Health for training nurses in the hospitals was first announced two years ago. On May 13, 2017, the ministry renewed the directive on this plan.
Instead of making nurses’ employment official to resolve the critical shortage of nurses in hospitals, the Health Ministry seeks to take advantage of untrained graduates as cheap labor forces, activists of the nursing community say. They say that thousands of nurses are working on unofficial contracts despite years of experience in this field and the Health Ministry plan will jeopardize their job security.
In addition, some experts believe that the plan will take back the nursing profession 50 years. 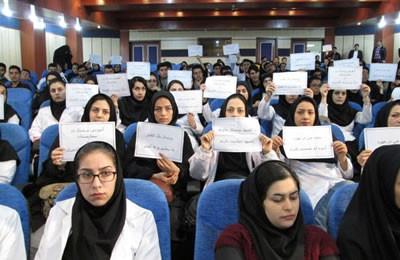 Iran’s nursing community staged nationwide protests on August 6, 2017, against the Health Ministry’s plan. The protesters in Tehran, Shiraz, Isfahan, Ahwaz, Bojnourd, and Hormuzgan called for termination of the plan which pursues to train nurses in hospitals against all academic standards. They said they will continue their protests until they reach their demands.
On the sideline of nurses’ conditions, the employment of nurses’ aides must also be noted. Presently, some 10,000 trained nurse’s aides have not been recruited and their employment remains undecided. They have high school diplomas and have paid 4 million toumans to do the year-long training course.
While the United Nations and the Commission on the Status of Women (CSW) has concentrated their 2017 agenda on elimination of discrimination against women’s economic, equal pay for equal work, closing the gap in participation in the job market, decent work for every woman, etc., the deplorable conditions of women nurses in Iran is cause for great concern and merits attention and solidarity on the part of the international community.