Crimes in Aleppo: Iran must be ousted from Syria

UPI, Dec. 29, 2016 - The unspeakable scenes we witnessed in Aleppo -- the massacre of women, children, doctors and other innocents -- broadcast to us almost live by the civilians trapped in the siege will go down in history along with Darfur, Srebrenica or Rwanda as major stains on the moral conscience of the world.
We cannot say we didn't know; we cannot say we didn't see it. The constant flow of images of the carnage have filled social media, creating a worldwide indignation that contrasts with the shameful inaction of the international community. The U.N. Security Council is paralyzed by the Russian and Chinese veto and the European Union and the United States have been conspicuously silent about the main enabler on the ground: the Islamic Republic of Iran and the Shiite militias it sponsors.
When in the previous years of the anti-Assad revolution the situation started shifting in favor of the pro-democracy opposition, Tehran took over the defense of the dictator and dispatched its Revolutionary Guards Corps (IRGC) and militias, such as Hezbollah and other groups of Pakistani and Afghani mercenaries. The Iranian regime's efforts to defend Syrian President Bashar al-Assad got reinforced when Qassem Soleimani, the head of the IRGC's Quds force, went to Moscow -- in violation of the United Nations resolutions that banned him from international travel for his involvement in terrorist activities -- and persuaded the Kremlin to join the conflict with more than logistical and financial support, and so the Russian bombing campaign started.
We saw in horror the gruesome balance of the Iranian and Russian interventions in Syria, and Western leaders have shown in their declarations that they know who's to blame. French President François Hollande said, "It's Russia and Iran who did not wish such a political process. They wanted to crush, to destroy the opposition and also maintain this confusion between terrorist groups and opposition groups or rebels."
British Prime Minister Theresa May declared: "Assad and his backers, Russia and Iran, bear responsibility for the tragedy in Aleppo." Her Foreign Minister Boris Johnson stated that "both Russia and Iran have failed to uphold their obligations under international humanitarian law."
If we know this, why hasn't the response been more decisive? The main Iranian opposition organization, the National Council of Resistance of Iran, has since long identified Fort Behuth, about 22 miles southeast of Aleppo, as the Iranian forces' headquarters, and has exposed the IRGC commander of these forces, Brig. Gen. Seyed Javad Ghafari, who has met Soleimani, Hezbollah leader Hassan Nasrallah and Assad himself. Had we just taken appropriate measures and implemented the United Nations resolutions to prevent the meddling of the Iranian regime at the beginning, we could have avoided this catastrophe. Instead Iran was invited to the negotiations table as "part of the solution"!
The international community has failed the Syrian people. Even if the fall of Aleppo is a major blow to the aspirations of the pro-democracy and moderate rebels, they have stated that their demands remain: the ouster of the Assad regime and the removal of the foreign influence in their country, especially the presence of Iranian forces and their satellite militias. And it is time for the West to deliver to the freedom-loving Syrians and pursue a stronger policy toward Moscow and Tehran.
The visibility of this tragedy now opens a window to change the course and at least try to prevent future bloodshed. The massacre of Aleppo won't be the last if we do not stop the meddling of the Islamic Republic of Iran, which has taken to the region its vile record on human rights and has used sectarian fractures to export belligerence and terrorism across the Middle East. The Ayatollahs have openly celebrated their role in the massacre of the Syrian people. The so called "moderate" Iranian President Hassan Rouhani made a phone call to "congratulate" the Syrian president following the brutal bombings and killings in Aleppo.
Iran is also active in destabilizing Iraq, Lebanon, Yemen and other countries. The consequences of this will be fatal not only for the suffering people of these countries, but also for the peace and stability of the world. Only by deploying a firm policy that halts Iran's aggression could a solution be found for the Syrian war and for all the conflicts in the region. 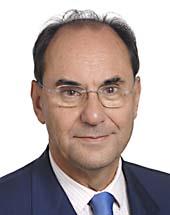 Alejo Vidal-Quadras, a Spanish professor of atomic and nuclear physics, was vice president of the European Parliament from 1999 to 2014. He is currently president of the Brussels-based International Committee in Search of Justice