Paris Conference: Call for Justice; Ending Impunity for Perpetrators of Crimes against Humanity in Iran, Syria

16.25: Shabnam Madadzadeh: “Today, I stand in front of you to echo voices that seek justice and human rights, the voices of the activist and perseverant political prisoners in Iran. I echo the voice of my Christian and Bahai compatriots, whom the regime continues to imprison simply on the basis of their faith; the voice of the resilient women in prisons; The voice of my dear sister and my hero Maryam Akbari Monfared; an innocent mother of three who has spent more than 7 years in the regime’s prisons. When they arrested her, her daughter Sara was only four. But, even in the darkest and most difficult days, Maryam refused to surrender. 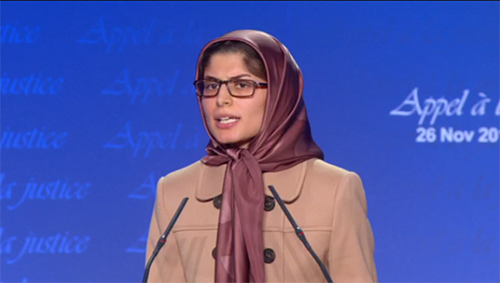 16.23: Shabnam Madadzadeh: “Like a dewdrop coming from the ocean of your piercing eyes, which glow with conviction and certainty, I have now joined the vigorous sea of the Mujahedin so I can grow even more. Mrs. Rajavi: I have come to you from the depressed and repressed streets of Iran, filled with cranes that execute citizens. I join you carrying a huge weight of suffering of the Iranian people, especially the women and girls of our homeland. I come to you from the ranks of activist and unrelenting university students, who have sent you messages. I carry numerous messages to you from the innocent women and girls languishing in Evin, Gohardasht and Qarchak prisons. They told me they had no safe refuge; they told me of the times when they were tortured, when they were held in illegal detention centers, and when they were raped by torturers. … For years, these women and girls have spent their lives under some of the worst circumstances, carrying with them their death sentences. They are experiencing a gradual death in the regime’s torture chambers. … Dear Mrs. Rajavi, I have brought all this pain in front of you to see because you are the only answer to these pains.” 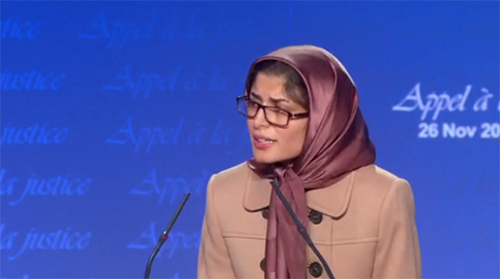 16.17: Shabnam Madadzadeh: “I left Iran a few months ago. I was a 21-year-old student and in my third year of studying computer science at Tehran’s Teacher’s Training University. My studies were cut short when the Iranian regime’s intelligence agents arrested me and my brother Farzad and took us to the notorious Evin Prison. I spent three months in solitary confinement, undergoing some of the most brutal forms of psychological and physical torture in Evin’s Ward 209. The worst of it all was when they tortured my brother Farzad in front of me. Later, I was sentenced to five years in prison by the regime and exiled to the dreadful Gohardasht Prison in Karaj. I spent time in Evin, Gohardasht, and the horrid Qarchack Varamin prisons. On several occasions that lasted a total of eight months, I was not permitted any visits or phone calls. But, we found solace in the proud resistance of the residents of Camp Ashraf. We were inspired by their perseverance and resoluteness even as we faced some of the most difficult times of our lives, like experiencing the execution of my dear friend and Kurdish activist Shirin Alam Houli.”

16.14: Shabnam Madadzadeh is welcomed onto the stage. She was arrested in 2009 while a student activist and spent 5 years in some of the most notorious prisons of Iran. Her older brother and sister were killed in the deadly attack on Camp Ashraf (Iraq) in 2011, while she herself was in Evin Prison. She was recently able to escape Iran and join the Resistance and she is here with us today. 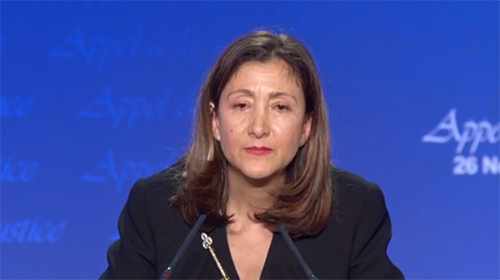 16.03: Ingrid Betancourt: I pay tribute to Iranian political prisoner Maryam Akbari-Monfared who is currently standing against the mullahs' regime from inside prison. She has demanded justice for her siblings who were massacred in Iran's 1988 massacre of political prisoners simply for supporting the democratic opposition People's Mojahedin Organization of Iran (PMOI or MEK).

15.59: Ingrid Betancourt, former Colombian Presidential candidate and member of the Colombian Senate: Now that the brave members of the Iranian Resistance were successfully relocated from Camp Liberty in Iraq to Europe, we are finally on the offensive against the Iranian regime. ... We can point the finger at those who have committed crimes against humanity in Iran.

15.56: Maryam Rajavi: “As for the present crisis in the region, any solution seeking to end war and insecurity, and address the problem of Daesh (ISIS/ISIL) in particular, must consider terminating the regime's meddling in the region and especially in Syria. Nothing is more catastrophic than cooperating with the Iranian regime to fight Daesh. This would strengthen the Iranian regime and its terrorism, and would nourish Daesh, politically and socially. Fighting Daesh is inseparable from fighting the mullahs and the Revolutionary Guards (IRGC). The more the mullahs are driven back, the more Daesh will reach its end. We appeal to all the nations and states in the Middle East to evict the Iranian regime from the entire region. We also warn Western governments against giving any form of assistance to the crisis-riddled regime of Iran. We advise them against acting as a crutch for the crumbling Iranian regime by dealing with the IRGC. Instead, they should recognize the Iranian people's Resistance for regime change, freedom and democracn Iran.” 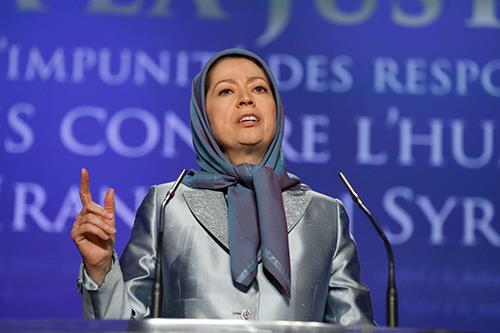 15.53: Maryam Rajavi: “I reiterate that, in diametric opposition to the mullahs, we and our people stand by the courageous and honorable people of Syria. We consider their innocent children as our own and we suffer with their pain and suffering. We shed tears for their devastated cities. We are anxious for their homelessness. We see ourselves as the citizens of the blood-drenched Aleppo. [Applause] … Syria is not alone. Syria beats in the hearts of the people of the world and no doubt it will triumph and it will be free.”

15.51: Maryam Rajavi: “Today, Khamenei has ever more strongly tied the fate of his decadent regime to the carnage of the people of Syria. He tried in vain to justify the regime's aggression and bloodshed under the pretext of defending the Holy Shrine (of Hazrat Zeinab). Now, he fails to unite even the internal factions of the regime over the continued waging of this filthy war. The war in Syria has nothing to do with the people of Iran and the Iranian interests.  … Everyone knows that Khamenei's warmongering in Iraq, Syria and Yemen is intended to maintain the repression in Iran and to preserve the rule of the Velayat-e Faqih regime

15.48: Maryam Rajavi: “In step with the escalation of domestic and international tensions for the regime, the Justice Seeking Movement for the massacred political prisoners has posed a major challenge to the mullahs by its expansion in Iran and abroad. In recent months, the Iranian Resistance disseminated new information obtained by its members and supporters inside Iran, involving the identities of more victims and more murderers. On the international level, the JVMI committee -- "Justice for the Victims of the 1988 Massacre in Iran" – announced its formation in Geneva. The official registration of the US joint Congressional resolution condemning the massacre of political prisoners in 1988, as well as the calls by various parliamentary groups across Europe, were valuable steps which I hope would advance at greater pace and bring about the ultimate result. This call for justice has targeted the foundations of the religious dictatorship, and this is why the Velayat-e Faqih regime is so vulnerable to it. This is an awakening call and a call to all the oppressed.” 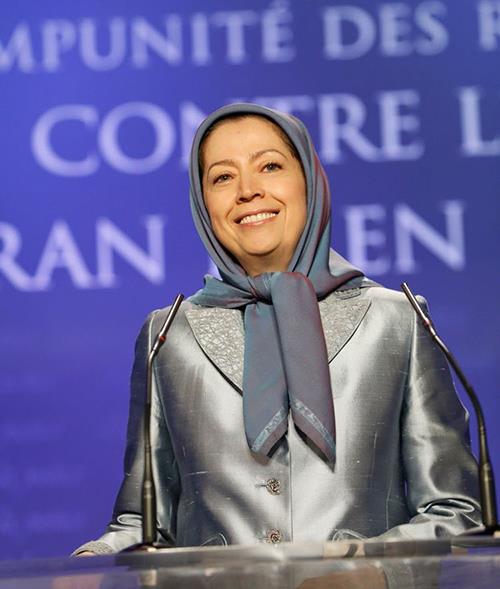 15.46: Maryam Rajavi: “Our demand is that the international community merely stops its policy of giving concessions to the Velayat-e Faqih regime. Our demand is to end this silence and inaction over the crimes of the Iranian regime in Iran and the region. What we want instead is their respect for the Iranian people's quest for freedom.”

15.43: Maryam Rajavi: “We have said this time and again since years ago, and I will repeat it again that the worst mistake of the United States in the region was its appeasement of the mullahs ruling Iran. From now on, the region would move towards peace and tranquility to the extent that the US distances itself from this disastrous policy. Likewise, the European Union may have a positive impact on the situation in Iran and the Middle East to the extent that it conditions the EU's political and commercial relations with Tehran on end to executions.”

15.40: Maryam Rajavi: “The mullahs are stuck so badly that they have started warning against the regime's future. So, our people are doing their drills by staging daily protests. What are they drilling for? They are drilling for the overthrow of the Velayat-e Faqih regime and their great uprising for freedom. [Applause] Under such circumstances, the Iranian regime is trying to conserve the West's defeated policy of appeasement. They want Western governments, and especially the United States and the EU, to continue their past years' policy which helped the religious tyranny survive in Iran and carry on with its war and terrorism in the region. After the US elections, however, the people of Iran, the Iranian Resistance, and the Middle East nations and states expect that the new US administration would revise its policy of the past three decades and particularly of the past 16 years.” 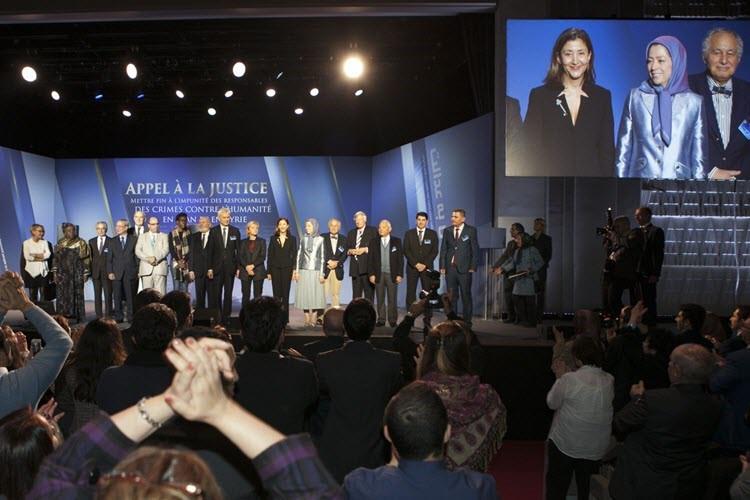 15.38: Maryam Rajavi: “One year after the lifting of sanctions, poverty and hunger continue to haunt our people more than ever. In the meantime, the regime's internal factions have begun settling their accounts by revealing a plethora of inner and outer secrets, financial frauds, and moral scandals. Today, the mullahs are no longer able to contain their own internal factions or the social protests, as they previously did.”

15.34: Maryam Rajavi: “Another sign the Resistance's rising phase is the escalation of popular protests and strikes in Tehran and other major capitals of Iran. Some weeks, there are ten protests held in front of the mullahs' parliament. Bazaar merchants are on strike in a number of cities. Students stage protest gatherings at their universities. Political prisoners stage hunger strikes in Tehran's Evin Prison, Gohardasht Prison in Karaj and in prisons of other cities.” 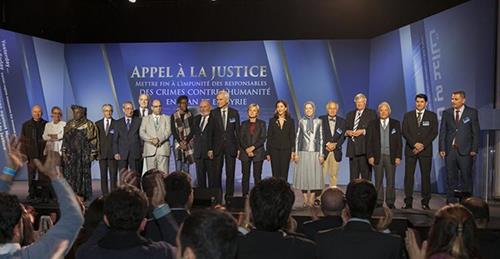 15.31: Maryam Rajavi: “We are holding this gathering at a time when the Iranian Resistance has successfully completed its major project, which was the safe and secure relocation of all members of the PMOI and a major part of the body of the Iranian people's movement from Camp Liberty to Europe. In this crucial endeavor, our Resistance overcame the ill will and intentions of the Iranian regime. The regime's numerous political and intelligence schemes failed and they did not accomplish anything by consecutive terrorist and rocket attacks. So, the Resistance's ultimate success is one of the most important signs that the clerical regime is in the phase of weakness and demise. Now the mullahs who plotted extensively to destroy all the members of the PMOI at Camp Liberty, have suffered a serious setback and there is not a day when they do not lament about the danger of the PMOI's resurgence within Iran.”

15.28: Maryam Rajavi begins her speech by paying tribute to the brave people of the great nation of Syria and the heroic Aleppo.

15.27: Participants cheer Maryam Rajavi who takes to the podium to begin her speech.

15.25: Sylvie Fassier, Mayor of the French town of Le Pin, the event’s moderator is now introducing Maryam Rajavi. “Mrs. Rajavi is a Muslim woman who stands against extremism and Islamic fundamentalism.”

15.23: Florence Berthout, Mayor of Paris’ 5th District, is welcoming guests to the conference. “Some 1000 executions took place in Iran last year”, she says. “We must mobilize against the abuses of this regime.”

15.20: Iranian opposition leader Maryam Rajavi is loudly welcomed into the conference arena. Mrs. Rajavi, is President-elect of the National Council of Resistance of Iran (NCRI).

15.00: Political prisoners languishing in Iran’s notorious jails have sent a message of solidarity to the Paris conference.

14.50: A major conference in Paris calling for justice and demanding an end to impunity for perpetrators of crimes against humanity in Iran and Syria will begin in a few minutes.