Reuters, Oct 27, 2016 - Japan, the United States and South Korea agreed on Thursday to work together to put more pressure on North Korea to get it to abandon its nuclear and missile programs, Japanese Vice Foreign Minister Shinsuke Sugiyama said.
Tension on the Korean peninsula has been high this year, beginning with North Korea's fourth nuclear test in January, which was followed by a satellite launch, a string of tests of various missiles, and its fifth and largest nuclear test last month, all in defiance of international sanctions.
"We reaffirmed the necessity to increase pressure against North Korea to have it give up its nuclear and missile development and realize the denuclearization of the peninsula," Sugiyama told reporters. 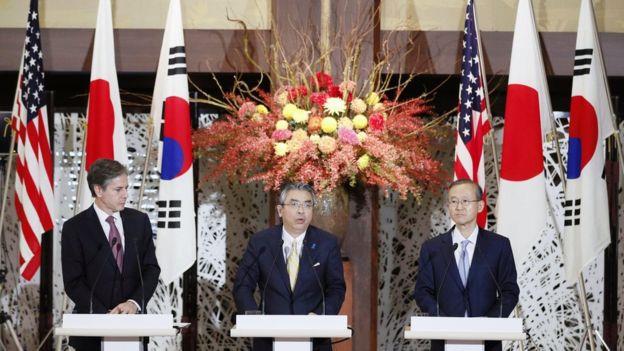 He was speaking after a meeting in Tokyo with U.S. Deputy Secretary of State Antony Blinken and South Korean Deputy Foreign Minister Lim Sung-Nam.
Russia and North Korea's lone major ally, China, have pushed for a resumption of six-party talks on denuclearization of North Korea. The talks, which also involve Japan, South Korea, and the United States, have been on hold since 2008.
Lim said his government had decided to resume talks with Japan for the conclusion of General Security of Military Information Agreement (GSOMIA), a pact that would share sensitive information on North Korea's missile and nuclear activities.
The signing of the agreement was expected in 2012, but South Korea postponed it amid domestic opposition against concluding such a security pact with Japan, a one-time colonial ruler.
Tokyo's ties with Seoul, plagued by a territorial spat and Japan's past military aggression, have warmed after reaching a landmark agreement last December to resolve the issue of Korean girls and women forced to work in Japan's wartime brothels.