ALEPPO (SYRIA) - 20 Sep. 2016- A convoy delivering aid to Syrians in Aleppo province was hit by a deadly air strike hours after the Syrian military declared an end to a week-long ceasefire, with an outraged UN warning it could amount to a war crime.

The UN said at least 18 trucks in the 31-vehicle convoy were destroyed late Monday en route to deliver humanitarian assistance to the hard-to-reach town of Orum al-Kubra. 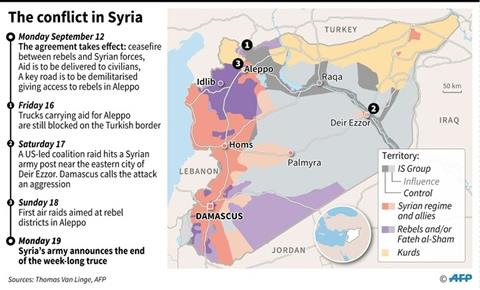 "Let me be clear: if this callous attack is found to be a deliberate targeting of humanitarians, it would amount to a war crime," O'Brien said.

The Observatory was unable to confirm if the planes responsible were Syrian or Russian.

The UN and Syrian Arab Red Crescent humanitarian mission had sought to take advantage of the ceasefire, which collapsed on Monday night as shells and bombs rained down on Aleppo city and the surrounding province.

The Observatory said a total of 36 people had died in the violence across the battleground region. An AFP correspondent inside Aleppo city reported almost non-stop bombardment and constant sirens.

Syria's military announced the end to the truce earlier Monday.

The ceasefire, which came into force on September 12, saw an initial drop in fighting but violence began to escalate late last week and the deal came under severe strain over the weekend. 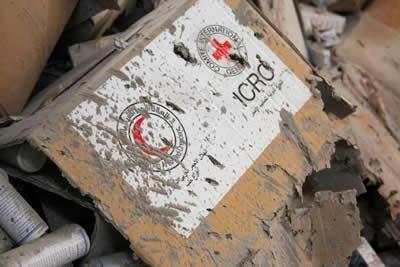 US Secretary of State John Kerry had warned that the truce could be the "last chance" to save the country.

The attack on the convoy is likely to provoke anger at the UN General Assembly in New York, with the delivery of aid to desperate Syrian civilians in rebel-held areas stressed as a key condition of the deal by Washington.

The US, Russia and other key players are set to gather there on Tuesday for talks aimed at ending the five-year conflict that has killed more than 300,000 people and displaced millions.

"Our outrage at this attack is enormous," the UN envoy for Syria, Staffan de Mistura, told reporters.

"The convoy was the outcome of a long process of permission and preparations to assist isolated civilians." 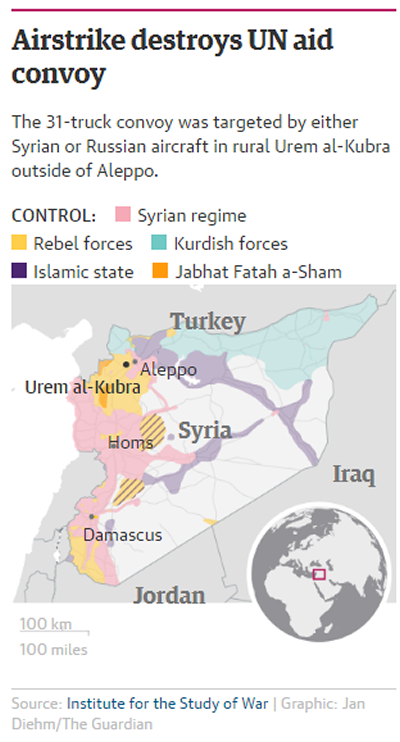 The United States said it was outraged at the attack and stressed that the destination of the convoy was known to the Syrian regime and its ally, Russia.

Aid distribution to Syrian civilians caught up in the conflict had already faced severe difficulties.

The UN held back deliveries destined for Aleppo city because it was unable to obtain security guarantees.

Jan Egeland, head of the UN humanitarian task force for Syria, said the convoy was bombed despite aid agencies coordinating their movements with all sides on the ground.

Inside Aleppo, residents in rebel-held areas hunkered down after the end of the ceasefire which had brought only temporary relief to the population of up to 275,000 people trapped there.

Sirens wailed as ambulances zipped through the eastern half of the divided city, an AFP correspondent reported.

The Observatory said that military planes had carried out more than 40 strikes since the Syrian army announced the end of the truce.

Chief US diplomat Kerry will try to speak to Russian Foreign Minister Sergei Lavrov in New York before Tuesday's meeting of the International Syria Support Group but statements from Syrian and Russian military officials on the ground appeared to bury the deal. 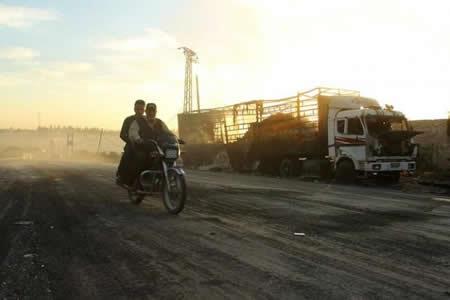 "Considering that the conditions of the ceasefire are not being respected by the rebels, we consider it pointless for the Syrian government forces to respect it unilaterally," said Russian Lieutenant General Sergei Rudskoy.

The ceasefire deal had three key components: fighting between government and rebel forces across Syria would halt, although strikes on Islamic State and other jihadists could continue.

And if the ceasefire held, the US was to have set up a joint military cell with Russia to target jihadists.

It came under massive strain on Saturday when a US-led coalition strike hit a Syrian army post near the eastern city of Deir Ezzor, where government forces are battling the Islamic State jihadist group.

Bashar al-Assad on Monday blasted the air strikes, which he said showed world powers supported "terrorist organisations" like IS.

His adviser Buthaina Shaaban went further, telling AFP that Damascus believed the raid which killed at least 62 Syrian soldiers had been intentional.

The bloodiest day for civilians was Sunday, when a barrel bomb attack killed 10 in a southern rebel-held town and one woman died in the first raids on Aleppo since the truce started.