Staffan de Mistura has called on the US and Russia to enforce a now crumbling ceasefire ahead of further peace talks. His words come just after Syrian government forces staged a devastating attack in Aleppo.
De Mistura, the UN’s envoy to Syria, said on Wednesday that a ceasefire brokered by the US and Russia needs to be "revitalized" before peace talks resume next month.
His comments came after a briefing with the UN Security Council about the status of the third-round talks, which he insisted have made progress despite recent hurdles.

Staffan de Mistura said a recent spike in fighting has overshadowed the talks and put an increasingly fragile ceasefire in "great danger".
Violence in Syria has intensified in recent days, despite the ceasefire.
At least 20 civilians were reportedly killed on Wednesday in government strikes on a hospital and nearby residential building in eastern Aleppo.
Civil defence volunteers, known as the White Helmets, told French news agency AFP that the dead included children and the only paediatrician left in rebel-held areas of the city. 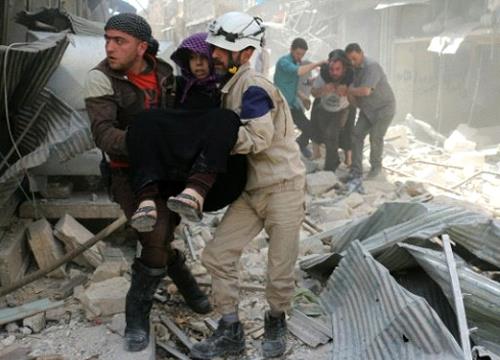 Mr de Mistura was speaking after briefing the UN Security Council about the stalled indirect talks between the Western and Saudi-backed opposition and envoys from President Bashar Assad’s government, which has the backing of Moscow.
Mr de Mistura said he hoped the talks would resume in May and predicted the process would continue until July.
Criticising the violence, he said: "In the last 48 hours, we have had an average of one Syrian killed every 25 minutes, one Syrian wounded every 13 minutes ... How you have substantial talks when you have only news about bombing and shelling?"
Renewed violence has stalled negotiations, as opposition leaders accuse the Assad government of targeting civilians even as its representatives in Geneva go through with the peace talks.
Speaking at the end of a third session of Syria peace talks this year, Mr de Mistura said a truce brokered by the US and Russia had pulled off a "miracle" by sharply reducing violence in March, but acknowledged that the renewed fighting has put the ceasefire "in great danger".
He called for a "US-Russian initiative at the highest level" to help reinforce it.
"There is no reason that both of them - who have been putting so much political capital in that success story and have a common interest in not seeing Syria ending up in another cycle of war - should not be able to revitalise what they created, and which is still alive, but barely," he said.
The talks stalled last week after the Western and Saudi-backed opposition, the High Negotiations Committee, suspended formal participation in the talks with Assad’s envoys to protest alleged government ceasefire violations, a drop in humanitarian aid deliveries and no progress in winning the release of detainees in Syria.
Mr de Mistura suggested work between Moscow and Washington is already under way to reinforce the truce and a revival of it would help bring the two sides back to the table.
"I know that both the Russian Federation and the US are talking among themselves on how to salvage on what has been actually a remarkable success - but needs to be sustained," he said.
If it is revived, he predicted: "It will not be difficult for everyone to come back around the table."
Mr de Mistura said that after 60 days, the ceasefire "hangs by a thread".
"I really fear that the erosion of the cessation is unravelling the fragile consensus around a political solution, carefully built over the last year," he said. "Now I see parties reverting to the language of a military solution or military option. We must ensure that they do not see that as a solution or an option."