The Iranian regime has built explosive chambers that are to be used particularly for high explosive impact as part of its nuclear weapons program, the National Council of Resistance of Iran – U.S. representative Office revealed on Friday in Washington.
The NCRI office in the US released the names of key figures, officials, organizations, staff and foreign advisors that have been involved in the project.
According to the information obtained by the network of the People’s Mojahedin Organization of Iran (PMOI/MEK) inside the country, the chambers were built by a company affiliated to the Iranian regime’s Revolutionary Guards Corp (IRGC) as part of a highly classified project that only two senior officials were informed about. 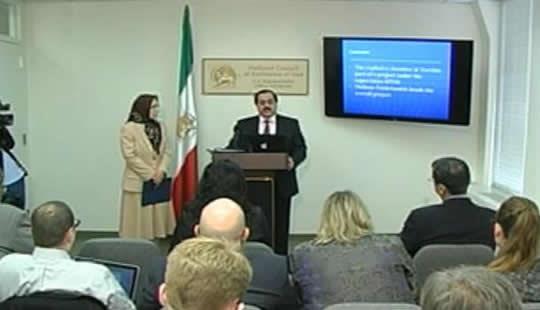 NCRI said Ukrainian experts who were in Tehran at the time collaborated closely with the regime in the field of explosive impacts.
An explosive chamber was installed and used at Parchin Military Complex as part of a project that began under the supervision of the Organization of Defensive Innovation and Research, or SPND.
Mohsen Fakhrizadeh Mahabadi, the key figure for the Iranian regime’s nuclear weapons program, headed the project. However the main individual responsible for the design and installation of the explosive chambers was IRGC official Saeed Borji.
Saeed Borji, an explosives expert and a former official at the “Center for Explosives, Blast Research and Technologies,” is a confidant of Mohsen Fakhrizadeh.
Two Ukrainian nationals worked closely with Borji in the design and installation of the explosive chamber that was built by IRGC affiliated company AzarAb Industries.
Further information is available at the NCRI-US office in Washington