An Iranian victory in Syria will mean the extension of its influence to the shores of the Mediterranean, writes Bassel Oudat in Damascus

The consensus among various opposition groups in Syria is that Syria’s real strongman is no longer the country’s president, Bashar Al-Assad, but Qassem Suleimani, commander of the Al-Quds Force, an offshoot of the Islamic Revolutionary Guard Corps (IRGC) of the Islamic Republic of Iran.

The same conclusion is shared by government officials sympathetic to the opposition. The latter believe that Suleimani is the one now controlling the movements and policies of Al-Assad and his top advisers. His recommendations are treated as gospel by the Damascus regime, and he is the one calling the shots on various battlefronts in the country.

Since the conflict started in Syria just over three years ago, Iran has been Al-Assad’s greatest foreign supporter, sending him money and weapons, military trainers and economic aid.

Tehran has trained, both in Iran and in Syria, the pro-government Shia paramilitary. It had Lebanon’s Hezbollah group throw its weight into battle alongside the Damascus regime. And it arranged for Iraqi, Yemeni, and Afghan fighters to travel to Syria — ostensibly to protect Shia holy places.

These acts were initially construed as acts of loyalty to a friend in need, but Iran’s involvement in Syria has since taken on a much larger meaning.

In recent weeks, Hezbollah commanders and Iranian politicians have been bragging that they are the ones now keeping the Damascus regime in power. Some Iranian officials have even boasted that Syria has become the “35th Iranian province.”

It seems that what was once merely a dream may now be turning into a potential occurrence, at least in the minds of Tehran’s decision-makers. Controlling the Levant would give Iran a sphere of influence unprecedented in its modern history, and the Iranian leaders, distracting western attention by protracted negotiations on its nuclear program, seem to be hoping to do just that.

The chess pieces are falling into place thanks to a long-running conflict in Lebanon, the US-led invasion of Iraq, and lately the Arab Spring protests in Syria.

Iran can now hope that unless its plans are foiled by decisive military or political intervention it can add Syria to its assets in the Levant. If Damascus falls further under Tehran’s influence, then a crescent running all the way from Tehran to the Mediterranean will be formed. Iran’s influence in the region, exploiting Shia sympathies and fears, could thus exceed anything its military planners have previously dreamed of.

Former IRGC commander Hossein Hamadani recently said that his country had no problem sending 130,000 paramilitary Basij fighters to prop up the Syrian regime.

Hamadani also mentioned the possibility of forming a Syrian branch of Hizbullah, one that would keep a stranglehold on that country similar to the one that Iran exerts in Lebanon through the same organization.

According to Hamadani, Iran is fighting in Syria to defend its own revolution. The war in Syria was “no less important than the Iraq-Iran War in the 1980s,” he added.

Another IRGC official, Mohammad Iskandari, said that the war in Syria was one “fought between Iran and the US.” Iskandari said that the IRGC had 42 brigades and 138 battalions on standby, ready to confront “enemies” in Syria.

Majid Mazaheri, also from the IRGC, described Syria and Lebanon as “frontlines” for Iran. According to Mazaheri, Tehran is obligated to stand by its allies in Syria and Lebanon. If it did not do so, it would find “the enemy at its own borders,” he said.

Syrian opposition members have reacted with indignation to the Iranian involvement in their country. Fayez Sara, a member of the National Coalition for Syrian Revolutionary and Opposition Forces (NCSROF), said that Iran had used the nuclear talks to distract the West from its role in Lebanon.

Speaking to Al-Ahram Weekly, Sara said that “Iran has benefited from its nuclear dossier, using it to deflect attention from its interference in Syria. As a result, this matter hasn’t been addressed with the urgency it deserves.”

Borhan Ghalyun, former leader of the opposition Syrian National Council, pointed out that western indecision on the Syrian crisis had boosted Iran’s ambitions in Syria.

Ghalyun did not believe that Iran could win the war in Syria, but he said that the continuing battles could “destroy the country and push the region to the verge of a regional war.” 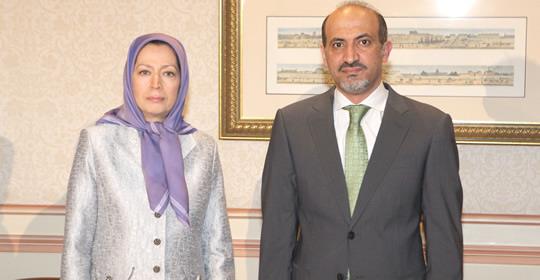 Michel Kilo, a prominent Syrian opposition figure, said that Tehran had no qualms about killing Syrians to achieve its goals.

Speaking to the Weekly, Kilo said that “the Iranian leaders now say that they are the ones keeping the regime in power... They don’t mind the fact that Syrians are dying in the interests of Tehran. They think that the destruction of Syria and the killing of its people are essential for the security and survival of their regime.”

It seems that Iran believes that it can use the current divisions among the Syrian opposition to take full control of the country, but opposition figures say that they hope to frustrate Tehran’s plans irrespective of the cost.

Some observers hope that the costly involvement of Iran in Lebanon, coming at a time of economic hardship back home, will force the Iranian regime to reconsider its policies.

A bit of pressure, economic or military, by the western powers would also be useful, they add.