Evin prison: the hell on earth

The Evin Prison, located in the hills of northern Tehran, was built in 1971. It grew to international prominence during the late period of the Iranian monarch, Mohammad Reza Shah Pahlavi’s rule. Thousands of political prisoners, most of whom supporters of the PMOI/MEK (People’s Mojahedin Organization Of Iran) and OIPF(Organization of Iranian People’s Fadayee Guerrillas)were held in horrifying conditions. they were constantly under torture and the threat of execution from the shah’s secret police, SAVAK. After the 1979 revolution, the new government rounded up those associated with the monarchy and detained them in the notorious Evin prison. During the following years, those who had supported the revolution, but were later seen as a threat to the new Islamic Republic, were taken to Evin prison. Perhaps the darkest period in Evin’s history came in the late summer of 1988 when more than 30 thousand political prisoners were mass executed after cursory trials. Most of the executed were members of the MEK.
The Evin Prison is one of the most infamous and notorious prisons in the world. Beatings, torture, mock executions, rape and brutal interrogations are the every day routine in this place. For four decades, the anguished cries of prisoners have been swallowed up by the drab walls of the low-slung lockup in Tehran. 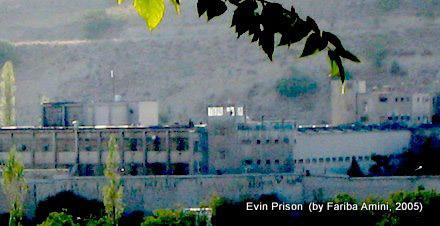 These sections are unofficial and secret detention centers in Tehran. There are prisons within the Evin Prison, which are outside the jurisdiction of the State Prisons Organization. Their officials are not accountable to the head of Evin Prison and they operate under the administration of the VAVAK (Islamic Republic of Iran’s Secret Service). In fact, the warden of Evin Prison cannot enter these wards without permission from [the officials in charge of these secret wards].These sections are known as the political sections of the Evin Prison. Most of the detainees in these sections are political prisoners related to the PMOI/MEK (Peoples Mojahedin Organization of Iran) who are against the ruling regime in Iran. Prisoners are interrogated, and in many cases tortured, held without charges, raped, and subjected to solitary confinement.

Evin’s Section 325
This section has both a solitary confinement and a public ward. The public ward is small and can hold a maximum of twelve individuals. Section 209 contains 90 solitary confinement cells which are arranged in 9 rows, each containing ten cells. The prison administrators close the doors at the opposite ends of one of the corridors and by opening the doors of the cells they create a public ward. Section 325 has an infirmary, which is located in what is used to be the women’s ward. Even though Section 209 is located behind Evin Prison’s general infirmary, it has its own special medical facility.


Section 350:
This section is also known as one of the political sections of the Evin Prison, where dozens of prisoners are held just because of their political views and for opposing the Iranian regime.
This section was raided recently by almost 100 guards and Intelligence Ministry officials. The prisoners were britally beaten and transferred to solitary confinement regardless of their injuries. This brutal and bloody violence began after the authorities tried to make a major inspection of the cells in Section 350. According to relatives, when the prisoners objected to this irregular search and stayed in their cells to look after their belongings, the police responded with extreme violence, smashing TV sets, equipment and personal effects.

Massacre of political prisoners in Evin, 1988

The most horrifying incident ever to take place in Evin was the mass executions of nearly 30,000 (by some accounts more than 30,000) political prisoners - most of whom were MEK members many of which were as young as 14 and 15. This event, which took place in 1988 is from all accounts, the single worst mass execution in the history of any political prison in the recent history.
Ayatollah Hossein-Ali Montazeri, Khomeini’s deputy at the time said that in the first few days of the 1988 massacre, thousands were killed, and by a conservative estimate, the final death toll was in the region of 30,000. It may be practically impossible to establish a formal means of bringing the culprits to justice, but it must be said that the episode of 1988 presents an unavoidable challenge to the will and consistency of the international community in dealing with such crimes. Moreover, since that time, there has been a constant flow of evidence from human rights NGOs, the Special Rapporteur on Iran of the UN Human Rights Commission, and thousands of individual witnesses regarding the merciless extermination by the regime of its political opponents. Ayatollah Montazeri indicated that the directions for extrajudicial executions came directly from the very top. He reproduces in his book the text of the fatwa issued by Khomeini, ordering the deaths of political prisoners. Khomeini wrote: “It is decreed that all prisoners throughout the country which remain steadfast in their support for the Mojahedin, MEK are "Waging War on God" and should be condemned to death.


The White Torture in Evin
In Iran, intellectuals, writers, activists and detainees use the term “white torture” to refer to the use of incommunicado solitary confinement or as its known as (enferadi). The conditions of solitary confinement used against political prisoners are designed to break the resolve of detainees such that they capitulate and agree to confess and videotaped, signed confessions, and give information regarding their political affiliations and associates. Prisoners are held in solitary cell blocks, many in secret detention centers, often underground, with 24/7 artificial illumination. They are denied communication with other prisoners and access to attorneys, family members, and medical professionals.

Torture against women in Evin

Girls in Evin Prison are systematically raped by the guards and their torturers. The sexual assault against prisoners are not confined to girls; from teenagers to aging women, all female prisoners are constantly exposed to this savage treatment. Many women prisoners loss their sanity as a result of being raped repeatedly by the guards.

Interrogations in Evin
Interrogations are carried out while detainees are held in abusive detention conditions. The detainees are faced with torture and threats of torture, and use of other coercive techniques to force them to confess. The interrogations carried out in Evin prison as well as other unauthorized detention centers throughout the country, demonstrate the very political nature of the crackdown: those targeted were detained because they acted as the main platforms for student movements. Testimony regarding the interrogations of political detainees demonstrated not only that these interrogations violated international standards, but also that the crackdown was led by those in the government who saw journalists and students as a class to be intimidated, silenced, and ultimately made into examples. The interrogations also provided the authorities with an opportunity to learn more about the dissidents, and use any information they were able to obtain to expedite their crackdown. Interrogations served as the principle means to fabricate criminal files and charges, coerce confessions, and make threats against prisoners’ families, colleagues, or political associates.