The Wall Street Journal, Jan. 25, 2018 - The Iranian military has halted the routine harassment by its armed “fast boats” of U.S. naval vessels in the Persian Gulf, the U.S. military said, a turnabout that officials welcomed but were at a loss to explain.
The boats for at least two years would dart toward the U.S. vessels as they passed through the Persian Gulf, risking miscalculation, but haven’t done so for five months, U.S. military officials said.
The officials said they hoped the respite would continue. “I hope it’s because we have messaged our readiness…and that it isn’t tolerable or how professional militaries operate,” Army Gen. Joseph Votel, who heads U.S. Central Command, told reporters traveling with him in the Middle East this week. Iranian officials didn’t respond to a request for comment.
The fast boats, typically armed with .50 caliber machine guns and rocket launchers, have come within shooting distance of American naval vessels, encounters that grew routine even though each one presents potential dangers to American vessels transiting through international waters.
In some of the more serious incidents, Iranian crews have directed spotlights at ship and aircraft crews, potentially blinding pilots as they conduct operations, according to U.S. military officials. In one case, an Iranian boat pointed a weapon at an American helicopter flying off a Navy vessel, officials said. In the most serious incidents, U.S. vessels have fired warning shots in return.
The Iranian boats are typically crewed by the Islamic Revolutionary Guard Corps, U.S. military officials have said. The IRGC is Iran’s elite military unit and reports directly to Supreme Leader Ayatollah Ali Khamenei.
Since January 2016, there has been an average of more than two “unsafe or unprofessional” incidents each month, according to the U.S. military. There have been 50 such incidents in the last two years, officials said. 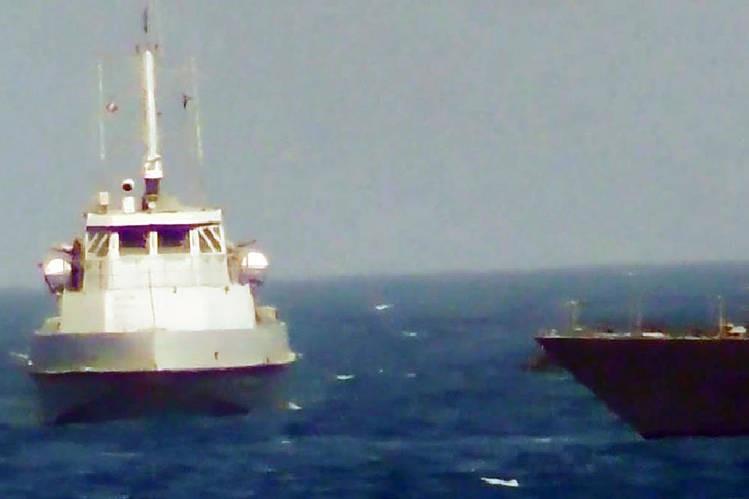 A video grab from the U.S. Navy shows an Iranian vessel heading toward the USS Thunderbolt in the Persian Gulf in July, 2017.

But in response to a query, U.S. military officials said there have been no such incidents since August 2017.
The apparent shift in Iranian behavior comes as an international nuclear agreement with Tehran is teetering as President Donald Trump threatens to end U.S. sanctions relief provided to Tehran under the deal, signed under President Barack Obama.
Washington’s European allies are discussing ways of heightening sanctions against Iran for actions not directly related to the country’s nuclear program.
Gen. Votel said that the abatement in the Persian Gulf didn’t alone signal a broader “strategic shift” by Iran, noting activities such as Iran’s support of Houthi rebels in Yemen. “I think we have to look at Iran in totality,” Gen. Votel said.
The U.S. has publicly criticized what it says is Iranian backing of the Houthis. Iran also has sent forces to Syria and backs militants operating there on behalf of the Assad regime.
Military officials noted that while Iranian harassment in the Gulf had declined, the country’s forces weren’t idle. Iran has been observed by the U.S. conducting activities that approach but stop short of what would be considered harassment, a U.S. military official explained.
Officials at U.S. Naval Forces Central Command, in Manama, Bahrain, were loathe to guess the reasons behind it.
“We are not going to speculate on the reason for this recent positive trend in interactions, though we hope it will continue in the future,” said Cmdr. Bill Urban, a spokesman for U.S. Navy’s Fifth Fleet, in Manama, Bahrain.
Ali Vaez, Iran project director at the International Crisis Group, said the decrease in harassment is part of a broader pattern by Tehran to refrain from provoking the U.S. and providing fodder for the Trump administration to blame them for regional instability.
“I think they understand the administration’s policy at this stage is to put the spotlight on Iranians and portray them as the source of all evil in the region,” he said. “The Iranians are certainly part of the problem in the region, but they’d like to be portrayed as part of the solution, not just the problem.”
The lull in harassment coincides with an internal directive last summer in which Mr. Vaez said Tehran’s Supreme National Security Council had ordered the IRGC to stand its ground in the region, but not to harass U.S. Navy ships. The council is presided over by President Hassan Rouhani but Mr. Khamenei has the final say.
Capt. Urban said the U.S. Navy hadn’t modified its operations in the region and would continue to operate “wherever international law allows.”
The last incident, in August, occurred when an Iranian drone flew in the vicinity of aircraft conducting night operations on the USS Nimitz.
Capt. Urban expressed concern about Iranians’ use of drones, also known as unmanned aerial vehicles, to harass American vessels.
“Even with the decreased incidents, we remain concerned with the increased number of Iranian UAVs operating in international airspace at night without navigation lights or an active transponder as would be expected according to international norms,” he said. “We continue to advocate for all maritime forces to conform to international maritime customs, standards and laws.”
The U.S. military currently is participating in a joint exercise called Native Fury with the United Arab Emirates, designed for training in ways to get essential supplies into the Gulf region over land if the Strait of Hormuz was ever blocked, as Iran has threatened to do in the past. Some military experts see Native Fury as a message to Iran.
It is “a demonstration of our resolve,” Gen. Votel said. The Iranians also are conducting a two-day exercise in the Strait of Hormuz.