Unrest in Iran will continue until religious rule ends

People demonstrate in solidarity with anti-government protests in Iran near the Iranian embassy in Paris, France, Jan. 6, 2018

Iranian voters, fed up with politics as usual, have demanded the ouster of both Supreme Leader Ali Khamenei and President Hassan Rouhani

THE CONVERSATION, January 23, 2018 - The two-week protest movement that rocked cities across Iran earlier this year has largely subsided, but the fallout from the government’s harsh response has just begun.
More than 3,700 people were arrested and 23 were killed in sometimes violent nationwide marches that started on Dec. 28, 2017, in response to an austerity budget proposed by President Hasan Rouhani.
At first, the protests were a display of anger by working-class Iranians, in the city of Mashhad, who complained of poverty and inequality. But the unrest soon spread to more than 80 cities. And as thousands of disenchanted citizens widened the agenda to include corruption, human rights, foreign policy and women’s empowerment, police began to crack down.
By Jan. 4, riot police using tear gas, batons and bullets seemed to have quelled the protests. Then, on Jan. 14, two detained activists, Saro Ghahremani and Ali Poladi, died in prison, reportedly from torture.
Now, family members have begun gathering by the thousands outside Iranian jails. As an Iranian-born scholar, I see this vigil as a warning to the government: Violence against dissidents will not go unnoticed. It’s a sign that unrest in Iran is far from over.
Criminalizing protest
Though Iran’s Constitution enshrines the right to peaceful protest, dissent has historically been met with harsh reprisal.
In 2009, hundreds of people were arrested during the Green Movement, a mass uprising of the Iranian middle class. Many were allegedly later tortured and raped in jail.
The recent detainee deaths have again raised fears that more activists will suffer a similar fate – concerns heightened by the hard-line rhetoric of Iran’s supreme leader, the Ayatollah Ali Khamenei.
On Jan. 2, Khamenei called the protesters – who across the country had taken the bold step of calling for his removal – enemies of Iran.“
Two weeks later, after the protests had ended, the spokesman for the judicial system – which falls under Khamenei’s jurisdiction – denied any government responsibility for protester deaths. He said that the bullets used to kill marchers aren’t the type used by Iranian police.
Such statements have earned popular sympathy for the thousands of people now keeping daily watch at Iran’s jails. Many Iranians were outraged when the same government spokesman, Gholam-Hossein Mohseni-Eje’i, claimed that the two activists who died in jail "were drug addicts” who had “committed suicide.”
The victims’ families, relatives, and even celebrities familiar with the case have firmly denied this assertion.
Though President Rouhani has on several occasions defended Iranians’ right to protest, he seems unwilling to challenge the supreme leader on the brutality that lead to 25 protester deaths.
His silence has infuriated Iranians. A few days into the protests, demonstrators began accusing the self-declared reformist president of being no different than supreme leader, chanting, “Reformists, hardliners, your time is up.”
Khamenei’s power is also financial. A major portion of Iran’s national budget goes to the office of the supreme leader and its affiliated institutions. This funding is not subject to government oversight, and no one but Khamenei himself knows how much money he receives.
Nor does anyone control how he spends it. Since 1979 revolution, the office of the supreme leader has laid out billions of dollars to expand the influence of his faith, Shia Islam, across the Middle East.
War is a key part of that foreign policy. From 1980 to 1988, under the auspices of the Ayatolla Khomeini, Iran fought the Sunni-led government of Saddam Hussein, in Iraq. Since 2011, the current supreme leader has sent Iranian troops into Syria’s civil war to help keep its contested president, Bashar al-Assad, in power.
The supreme leader is also behind Iran’s controversial nuclear program. The country’s insistence on processing nuclear-grade uranium – ostensibly as a source of energy – has brought international sanctions, invasive inspections and global political criticism to Iran.
Finally, because it controls police and the judiciary, the supreme leader’s office sets the tone for government handling of protest. And, since 1979, it has appointed conservative leaders who criminalize dissent.
‘We regret Rouhani’
President Rouhani has twice won election handily by promising to resolve Iranian’s nuclear conflict, free the Green Movement leaders and ensure civil rights for all citizens.
All of these initiatives require him to go head to head with the supreme leader. In 2015, he succeeded in achieving a hard-fought nuclear agreement between Iran and six world powers, a deal Khamenei ostensibly opposed.
But, in exchange, Rouhani has had to sacrifice other campaign promises like improving human rights, fighting corruption and addressing inequality. The mass discontent on display recently reflects voter frustration with the president’s lack of progress on these important issues.
One recent scandal has implicated two high-level officials – judiciary head Sadeq Larijani and his brother Ali Larijani, who is speaker of the parliament – for using their political connections for their family’s economic gain.
And last year, a January 2016 leak dubbed “Payslip-gate” revealed that the top brass at state-owned companies were earning extravagant salaries of up to 100 times the monthly wage of the lowest-paid government employees.
The end of the supreme leader?
Between Rouhani’s ineffectiveness and Khamenei’s state-sanctioned violence, both leaders seem to have alienated Iranian voters.
The damage may be beyond repair. Protest slogans like “Overthrow the clerics’ regime” and “Death to Rouhani” suggest that for the first time since 1979, Iranians are demanding not incremental reform but a whole new era – one without an omnipotent, unaccountable supreme leader. 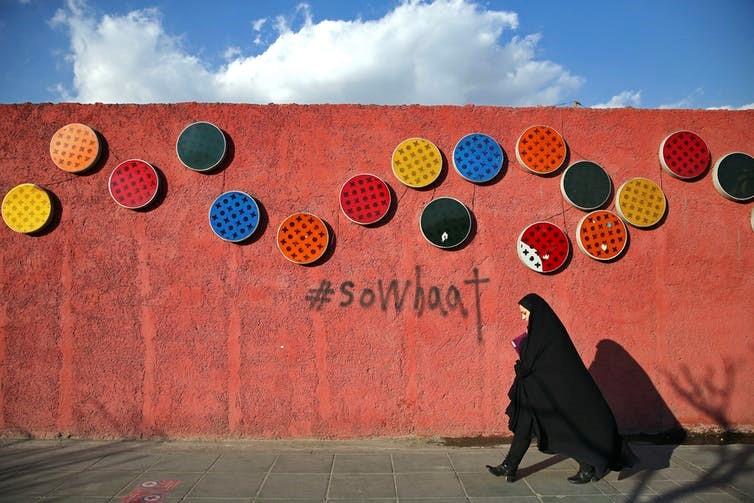 Many Iranians have pushed their government to address persistent gender inequality, to little avail.

That puts President Rouhani in an uncomfortable position. I believe Iran’s president is loyal to the principle of an Islamic republic rooted in religious authority. After all, he is a cleric, too.
But Rouhani – who has a doctorate in constitutional law from a Scottish university – is also smart enough to observe that this medieval dual-government system is struggling to survive in modern, restive Iran.
Time may heal all. Khamenei is 78 years old and in poor health. In my assessment, it is conceivable that his death could actually mark the beginning of the end of supreme leadership in Iran.
And if it doesn’t, then Iran’s uprisings will go on.