By Kevan Harris and Zep Kalb

Washington Post, January 19, 2018 - Beginning on Dec. 28, a wave of protests surged across Iran, with at least 75 cities reportedly experiencing one or more demonstrations in the first week. Soon after they began, commentators rushed to attribute the protests to various grievances, from Ponzi-like banking scheme collapses and budget corruption allegations to soaring prices of eggs and gasoline. However, our research suggests that rather than grievances alone, an underappreciated precursor for the protests was the buildup of demonstrations and rallies by teachers, workers, trade unions and civil society associations.
Before the recent protests, we constructed a data set detailing labor unrest in Iran from 2012 to 2016. Using credible domestic newspapers that contained information on these demonstrations, we noted the location, date, relevant actors, and police response for any event in which 10 or more people reportedly participated. Our database includes protests by female teachers, retired pensioners and unemployed laborers, to name a few examples. By examining these years of protests in light of the most recent protest wave, some fascinating patterns emerge.
What motivated these protests?
Recent media analysis of Iran often notes the economic grievances of the 2017 to 2018 protests. Yet scholars of social movements have long noted that there is no direct path leading from economic deterioration and public malcontent to political upsurges and collective mobilization. Indeed, protest does not necessarily — or even usually — occur when economies are at their worst. Iran’s 1979 revolution, the 2011 Arab uprisings and the 2013 Gezi Park protests in Turkey all followed booms in economic growth. From 2016 to 2017, Iran’s non-oil GDP actually increased by about 6 percent, though this growth seems to have been unevenly enjoyed by Iran’s middle and upper income groups.
Other analysis has played down the recent protest wave, pointing to its unorganized, provincial and leaderless features. When we reached out to some of our contacts in Tehran, they told us they could not fully make sense of the demonstrations either. This does not mean, however, that the recent Iranian protest wave is insignificant. Far from it. As key scholars have argued, protests can still impact the powerful even when they lack preexisting networks or collectively agreed upon grievances. The disruptive power of protest stems from how popular struggles alter what is permissible or acceptable, defying the prevailing laws or practices normally allowed by authorities. Not everyone who participated in the week’s protests was a committed militant keen to overthrow the state, but most had probably seen or heard that the constraints on public protest had shifted in cities and towns nearby.
Why do we see protests now?
Consider this: Of the 75 towns and cities where one or more protests reportedly took place between Dec. 28 and Jan. 3, all 75 of them had experienced some degree of labor unrest from 2013 to 2016.
Furthermore, as we show in Figure 1, the relative number of labor protests has been increasing each year. 2015 was a notably high year of recorded labor unrest, due to nationwide teachers’ demonstrations, which spanned an unprecedented 60 cities. 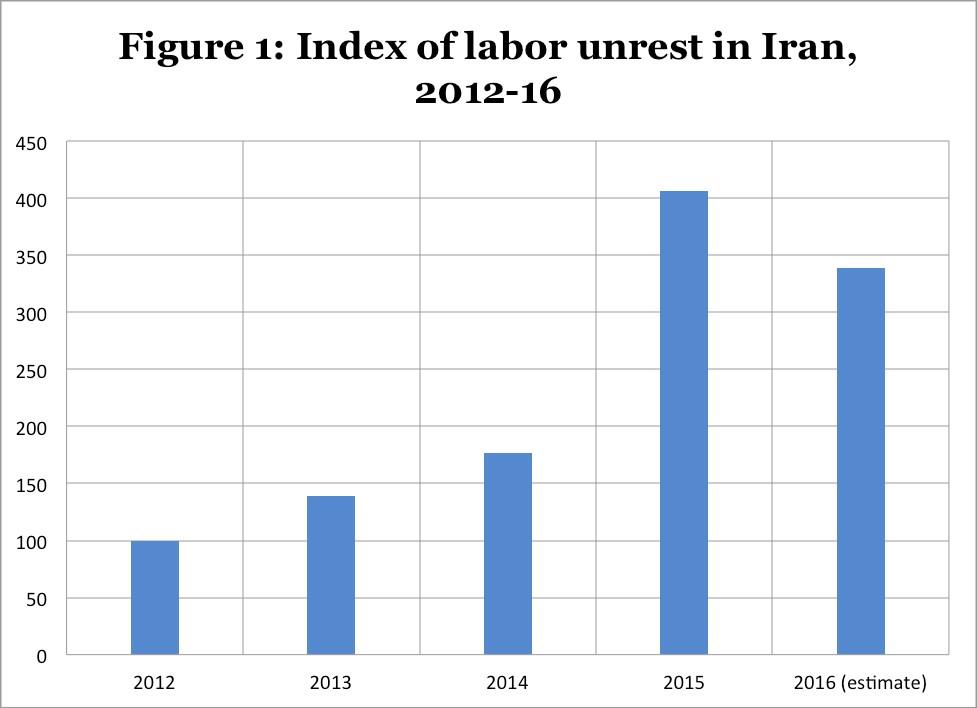 Protests are shifting away from the capital
These figures do not include additional protests over land, housing, water or municipal projects. Even so, another striking pattern appears in our data. As shown in Figure 2, the share of protests in Tehran declined compared to the rest of the country. In other words, social protest in Iran has been growing for years, spreading beyond Tehran and encompassing the country’s periphery. 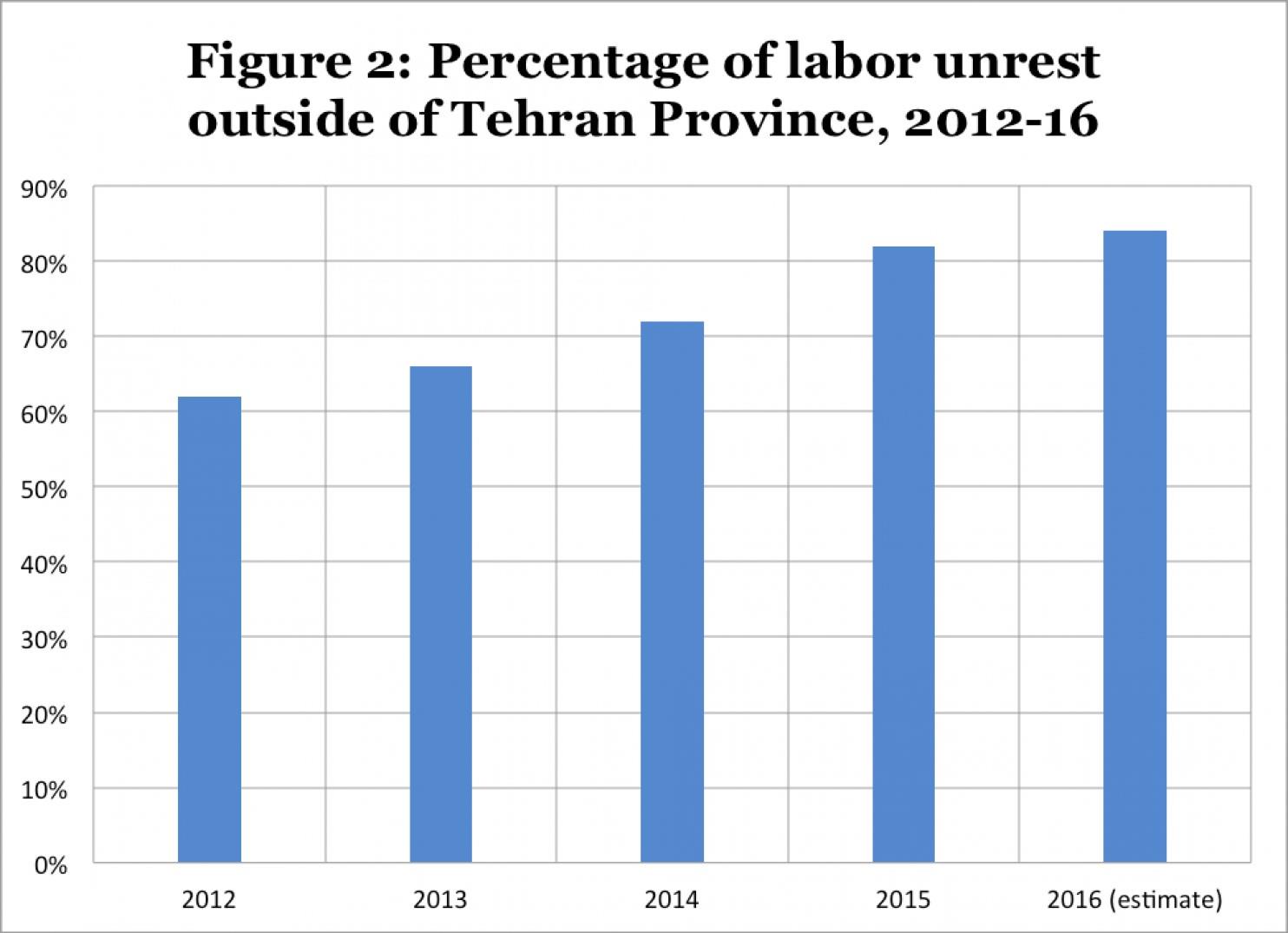 Iran’s ability to locally bargain with protesters
Studying these protests in detail, we also find that labor unrest has rarely ended in violence.
In August 2016, for instance, such a wide array of different protest groups — including bank scam victims, technical college graduates and kindergarten teachers — gathered in front of the parliament building in Tehran that the front door broke as people tried to push inside. The police interfered but did not attack. Instead, protesters were given specific locations to gather around the parliament, where some continued to sit in until their demands had been heard.
This sort of localized bargaining has been observed elsewhere, for instance, as with the Chinese government’s ability to absorb thousands of protests a year.

Of course, local police in Iran have sometimes repressed public assemblies in recent weeks, with at least 25 dead and thousands of young Iranians — many of whom were probably bystanders — swept up into detainment for days or more. This occurred with the previous labor protests as well, such as in September when police cracked down on striking workers at local factories in the industrial city of Arak. Perhaps not coincidentally, protesters in Arak over the past weeks have been arrested in disproportionate numbers. However, the sheer scale of nonviolent protest across Iran presented a serious challenge to overt strategies of systematic use of violence by government forces.
Whether by coercion or negotiation, Iran’s political factions have been unable to stem the tide of social protest rising for the past several years. As with previous upsurges in post-revolutionary Iran, such popular mobilization tends to widen the cracks in elite competition within the country’s political establishment. As these political factions jockey against each other, draw new lines of competition and attempt to mobilize popular support in upcoming political contests, popular disruption from below may create spaces where Iran’s political establishment will be forced to react in surprising ways yet again.

Zep Kalb is a PhD student in sociology at the University of California at Los Angeles.