Iran: Why This Time Is Different, And What’s Next

What is happening in Iran, why, and who is involved?

In the last 40 years, Iran has endured five convulsions.

9 January 2018 - The first, the 1978-79 Islamic Revolution, led by Āyatollāh Ruhollah Khomeini, succeeded in his goal of replacing the Shah’s 2,500-year-old Peacock Throne with an Islamic Republic. By 1983, he and his supporters consolidated power, shoving aside moderates. But the economy was wrecked, thanks in part to a costly 1980-88 war with Iraq, triggered by Saddam Hussein’s invasion of Iran. Sour relations with America owing to the 1979-81 hostage crisis didn’t help revive the economy.
In July 1999, thousands of students spearheaded protests after the judiciary, dominated by hardliners shuttered a reformist daily newspaper, Salam (Peace). Centered in Tehran, Isfahan, and Tabriz, between 5-17 people were killed, and 1,200-1,400 arrested. The goal of changing Iran to a secular democracy was crushed.
Ten years later, in June 2009, students again led a protest, this time joined by millions, shouting: “Allāhu Akbar” (God is Greatest) from rooftops in Tehran and across the country. The goal of this Green Revolution, also called the Persian Spring, was to challenge the controversial Presidential election result that saw an incumbent conservative — Mahmoud Ahmadinejad — win a surprise victory over a moderate — Mir-Hossein Mousavi — amidst widespread irregularities. Roughly 110 people were killed, and 10,000 arrested, with no change at the top.

Then Mayor of Tehran and presidential candidate Mahmoud Ahmadinejad shakes hands with his supporters as he leaves a polling station during Iran’s first ever presidential election runoff in Tehran, Iran, on June 24, 2005.
Two years thereafter, in February 2011, The Day of Rage against the government turned into massive protests that lasted for weeks into May. At issue, again, was election fraud, as well as freedom of speech and human rights. The timing was no accident: protestors expressed solidarity with the contemporaneous Arab Spring movements in Tunisia and Egypt. The result was the same, too: multiple deaths, approximately 1,500 arrests, and no government concessions.
Just days after Christmas 2017, pan-Persian protests erupted. Already, 24 are dead and over 1,000 arrested. But, this time is different. Of all chants resonating from today’s protests, none is more revealing than “The people are begging, the clerics act like God.” What’s happening in Iran now is fundamentally an economic revolt driven by the masses. With no central conductor, spontaneous street choirs sing in a bass tone that Iran is neither just a theocracy nor just a plutocracy, but both, and that its theo-plutocratic economy is base.
In other words, the Islamic revolutionaries of the late 1970s have become the establishment.

Their economy, a ‘Theocratic Plutocracy’, is frail, and their self-declared policy of an ‘Economy of Resistance’, is failing. The choirs of protests sing for sustainable, inclusive growth. For that to happen, Iran should consider transforming its economic structure to ‘Theocratic Capitalism’, and shifting its policy to an ‘Economy of Acceptance’.

It is for the Iranian people to express, peacefully, their aspirations for self-determination. The golden rule ought to differentiate legitimate foreign commentary from interference. How would Americans feel about unholy tweets from Qom, coupled with calls for a United Nations Security Council meeting about Confederate statues?
What’s On Point is a candid conversation about the boiled-over frustration of poor, lower- and middle-class Iranians.
Dreaming of studying and practising law, and ultimately serving Iran, some of them reach out to this columnist. Though eager, industrious, tech-savvy, and multi-lingual, they cannot find funding for overseas studies to enhance their human capital. Nor can they find jobs without an insider connection.
The official unemployment rate of 12.4 percent they face is deceptive.
Over half of Iran’s 80 million people are under 30, and the International Labour Organisation estimates the unemployment and underemployment rates among 15-24 year-olds are 26.7 and 12.4 percent, respectively.

Iran often is called authoritarian, in part thanks to Āyatollāh Khomeini’s view of liberal western democracy as undesirable. It also is dubbed a dictatorship, thanks to its poor human rights record. “Sponsor of terror” is another label tossed at the regime, especially by America, Saudi Arabia, and their Sunni Arab allies. None of these labels aptly explains the current protests. They are political epithets, whereas Iran’s lousy economy motivates the incantations of protestors.
What’s needed is an inclusive term for both the religious foundation of Iran’s political system and its dysfunctional economy. 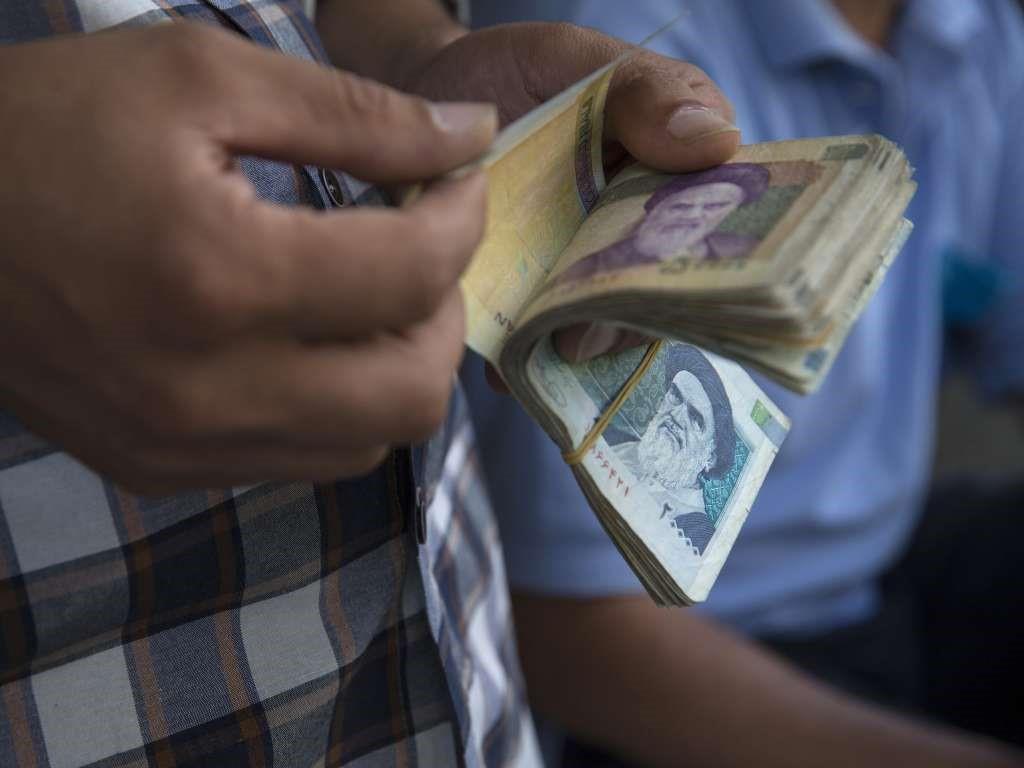 Pedestrians and traffic pass a banner with a photograph of Ayatollah Ali Khamenei, Iran’s supreme leader, and Ayatollah Ruhollah Khomeini, founder of the Islamic republic of Iran, on a road in Tehran, Iran, on Wednesday, August 26, 2015.

Theocratic plutocracy works. A theocracy is a state ruled by clerics, who may or may not be authoritarian or dictatorial. That’s embedded in Iran’s Constitution, which is based on the welayet-el-faqih doctrine — the governance of Islamic jurists — articulated by Āyatollāh Khomeini.
The Oxford English Dictionary defines plutocracy as “a government by the wealthy; a state or society governed by the wealthy; or an elite ruling class whose power and position stems from its wealth.” In today’s Iran, some leading theocrats, i.e., top clerics, are plutocrats, too. Others are clubby with secular plutocrats. The lyrics of street choirs are not blasphemous. Rather, they highlight ‘god-like’ theo-plutocratic status, and would not reference “begging” if benefits trickled down to them. But, that’s not how a theo-plutocratic economy operates.

Iran’s Gross Domestic Product growth rate, which at 12.3 percent in 2016 is up from 1.4 percent in 2015, also needs to be dis-aggregated.
The oil and natural gas industry, liberated from non-financial sanctions after the July 2015 Nuclear Deal, accounts for most of that reversal. That industry is not labour-intensive. Non-hydrocarbon sectors must grow rapidly, possibly 5 percent plus, to absorb young labour market entrants.

Islamic property law champions the Vice Regency Theory, whereby people own assets as stewards for the Regent — God (Allāh). He entrusts people to use His bounties prudently, and share them magnanimously in reflection of His mercy. Yet, something was lost in the theory-to-practice translation.
Twenty million of Iran’s 80 million people are below the poverty line.

This includes, says the World Bank, 8.2 million subsisting on less than $5.50 per day in 2014, and Iranians became 15 percent poorer between 2005-2016 (based on CBI household budget statistics).
Theo-plutocrats blame sanctions for crippling Iran’s economy. Correct, but not the whole story when corruption is unveiled.
Corruption is a hugely significant intervening variable between the independent variable (sanctions) and the dependent variable (economic performance). Some theocrats behave non-transparently to promote their self-interests. That’s a temptation common across all religions.
Put theocrats and plutocrats together, as in Iran, and corruption is more than foreseeable. The manifestations:

Employment patterns are not merit-based. Government positions are staffed with family and loyalists, generating two agency problems. Some loyalist-agents act in their own self-interest, adversely to their theo-plutocrat principals. That’s petty corruption. Worse, those agents are not skillful to run the economy competently. That’s macro-corruption.

Between March 2005 and March 2014, the Iran Privatization Organization divested 55 percent of state-owned enterprises through public offerings on the Tehran Stock Exchange.
That still leaves nearly half of the economy in state hands. Some of those hands are palm-up.
Transparency International ranks Iran as 131 (in 2016, tied with Russia, and bounded by Denmark at the top and North Korea at 176) in its Corruption Index.

Foreign military ventures are expensive. Arguably the second-most important street-choir lyric is “Let go of Palestine. Not Gaza, not Lebanon, I’d give my life [only] for Iran.” Arming Hezbollah with 120,000 Katyusha rockets pointed at Israel inflicts an opportunity cost on Iran’s poor, with no changes in any occupied territory. 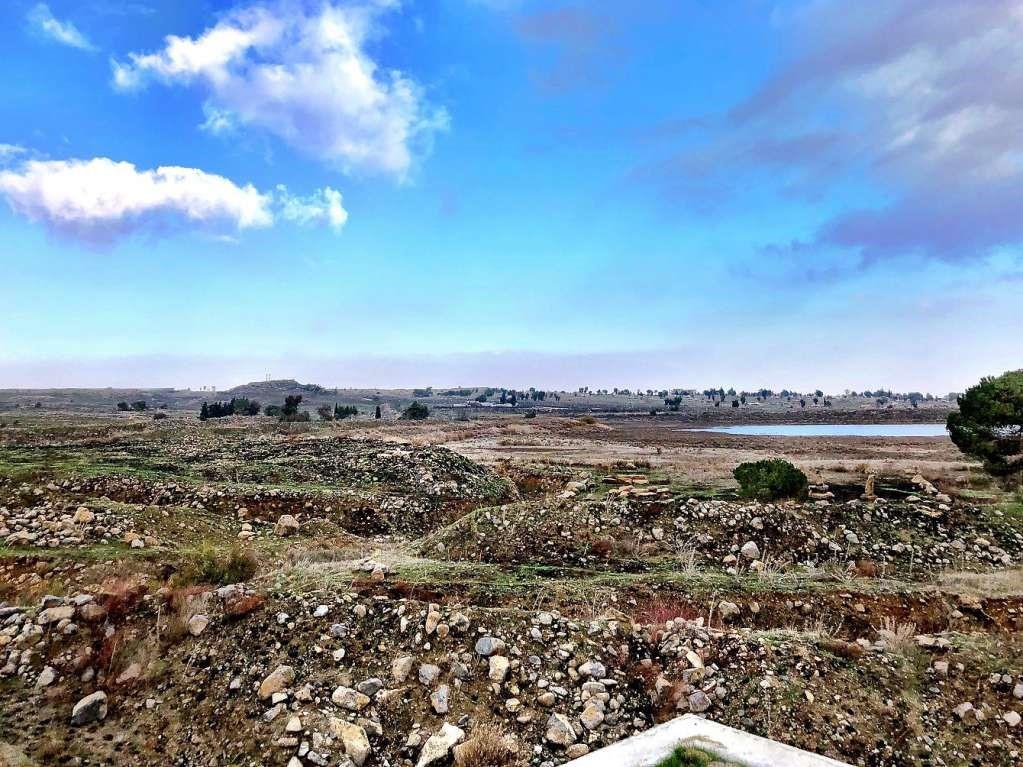 From the Golan Heights, looking left to Lebanon, and right to Syria