Yet in recent months at least five prominent former officials, including a vice president and a former planning minister, have been taken into custody to await trial on corruption charges. Several allies from the private sector who stand accused of misappropriating public funds have also been locked up.

The detentions come as President Mauricio Macri has vowed to upend Argentina’s culture of impunity in graft cases by reforming the penal code, making government contracting more transparent and carefully tracking the assets of public servants.

But his government is not exactly claiming credit for the crackdown underway, which so far has netted only political opponents, leading to accusations that Mr. Macri is using the judicial system to neutralize the opposition.

“Never in the history of Argentina have we had as many important people detained,” the justice minister, Germán Garavano, said in an interview. “The question we have to ask ourselves as we look to the future is whether this represents a change, a profound reform or merely a reaction to a public outcry right now. We’ll get that answer in a few years.”

Mr. Garavano and other senior officials on the forefront of the effort to root out public malfeasance describe their quest as a bold pursuit that may ultimately fail for one primary reason: judges.

For decades, a dozen judges on the federal bench in Buenos Aires have let corruption cases languish without action, often running out the clock on the statute of limitations. Breakthroughs in high-profile cases often follow a reversal of political fortunes, calling into question the fairness of punitive measures. And even when prominent politicians have been convicted, they typically find a way to stay out of prison and keep their assets.

“My conclusion is that Argentines cannot trust Argentine justice,” said Laura Alonso, the head of Argentina’s anticorruption office, a once-obscure federal agency that has gained visibility and authority since Mr. Macri was elected in 2015. “It responds to political spasms.” 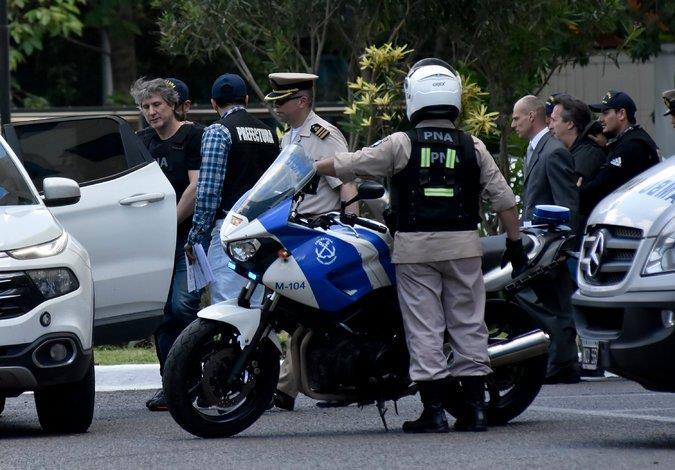 Former Vice President Amado Boudou, left, and a business partner were escorted to vehicles transporting them to court in Buenos Aires in November

Argentine prosecutors initiate corruption investigations by bringing forward allegations of wrongdoing. Judges have the authority to take or reject cases. In those that move forward, judges have the primary responsibility to investigate and decide whether a defendant should face trial.

The system does not subject judges to deadlines or much oversight. One of the 12 current federal judges in Buenos Aires, who spoke on the condition of anonymity, said that much of the criticism leveled against him and his colleagues was on point.

While each judge has his own style of working, some are influenced by politics, he said, adding that the system had been set up in a way that allowed judges to manage the timing of their cases without any consequences.

The early-morning detention of former Vice President Amado Boudou in November seemed to exemplify this dynamic as a federal judge ordered his pretrial arrest in a yearslong money laundering and illicit enrichment case. Video footage of a barefoot and sweatpants-clad Mr. Boudou in his apartment while a judicial official read the charges against him shocked Argentines.

Former President Cristina Fernández de Kirchner, who was recently elected to the Senate, faces five sets of corruption charges. She has also been indicted on a treason charge, accused of conspiring with Iran to cover up that country’s role in a 1994 bombing in Buenos Aires that killed 85 people.

She and several top officials in her administration charged in the Iran case, including former Foreign Minister Héctor Timerman, were ordered detained while they await trial. Mrs. Kirchner enjoys immunity from detention as a sitting senator.

They have all denied wrongdoing.

“It is evident that the government uses the judiciary for political ends, specifically to tame and discipline the opposition,” said Alberto Fernández, who served as the head of cabinet for President Néstor Kirchner, Mrs. Kirchner’s late husband and predecessor. 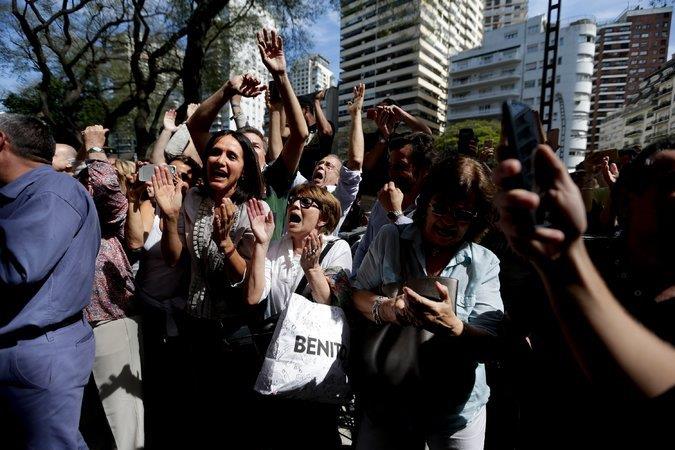 Protesters outside the apartment of a former official, Julio de Vido, who has been ordered detained

“It is very concerning,” added Mr. Fernández, who teaches criminal law at Buenos Aires University, “because what is now being used against members of the opposition could one day target regular citizens.”

Yet few Argentines doubt that corruption was rife during the Kirchner era. A former public works secretary, José López, was caught with almost $9 million in cash stuffed in duffel bags. A former transportation secretary, Ricardo Jaime, sailed on a yacht and flew on a private plane provided by industry leaders his department awarded contracts to.

To grasp just how pervasive Argentina’s culture of impunity has been, consider the case of former President Carlos Menem, who governed from 1989 to 1999. When he was questioned over the propriety of accepting a Ferrari from a government contractor, Mr. Menem responded defiantly, “The Ferrari is mine, mine, mine!”

A flurry of investigations into corruption during his time in power dragged on for decades until a court in 2015 sentenced him to four years in prison for embezzling public funds to dole out bonuses to others in government. Yet the continuing appeals and the immunity from incarceration provided by Mr. Menem’s Senate seat have so far allowed him to disregard the sentence.

Mr. Menem’s successor, Fernando de la Rúa, who was in power from 1999 to 2001, was prosecuted, and acquitted, over allegations that he

had bribed lawmakers to pass a labor reform.

Macri officials and good-government watchdogs say corruption reached epic proportions during the governments of Mr. Kirchner and Mrs. Kirchner, his wife. The left-leaning Peronists governed from 2003 to 2015, an era that began with a windfall from a commodities boom and ended during a period of economic contraction.

“It began looking more like a kleptocracy,” said Natalia Volosin, an Argentine human rights lawyer who studied the history of corruption while obtaining a doctorate at Yale.

Mr. Macri came into office as corruption scandals were rattling several countries in the region, most notably Brazil, where a team of judges and prosecutors have recovered billions of dollars and sentenced scores of politicians and businessmen for their roles in kickback schemes. Those cases have made corruption a top concern among voters throughout Latin America.

Soon after taking office, Mr. Macri’s government expanded a public records policy and made government bids and contracts accessible online. It also increased the number of public officials who have to disclose their assets in public filings.

“We have a strong public demand in favor of public integrity,” said Ms. Alonso, the anticorruption official, who is a former lawmaker. “We’re not going to let a single one slip through.”

In 2016, at Mr. Macri’s urging, Congress passed a corporate responsibility law that subjects firms that pay bribes to fines and prosecution, and a change to criminal procedure that established a mechanism for plea deals.

Plea deals were decisive in getting a Brazilian corruption investigation known as Lava Jato, or Car Wash, off the ground in 2014. Defendants, in a break with the past, began being detained before trial, and trials began taking months rather than years.

Yet in Argentina only one low-level corruption defendant has sought a plea deal so far. The reason, according to experts and government officials, is that most defendants regard the possibility of being ultimately held accountable as remote.

It remains unclear whether the spate of arrests will change that calculus. After all, final convictions in corruption cases remain the exception.

Many within the judicial system are skeptical that there can be a fundamental change in the way things operate without a wholesale overhaul of the penal code and the judiciary.

Some judges sincerely want to clean up the judiciary, the federal judge said, but others who have grown used to the system have no interest in changing it.