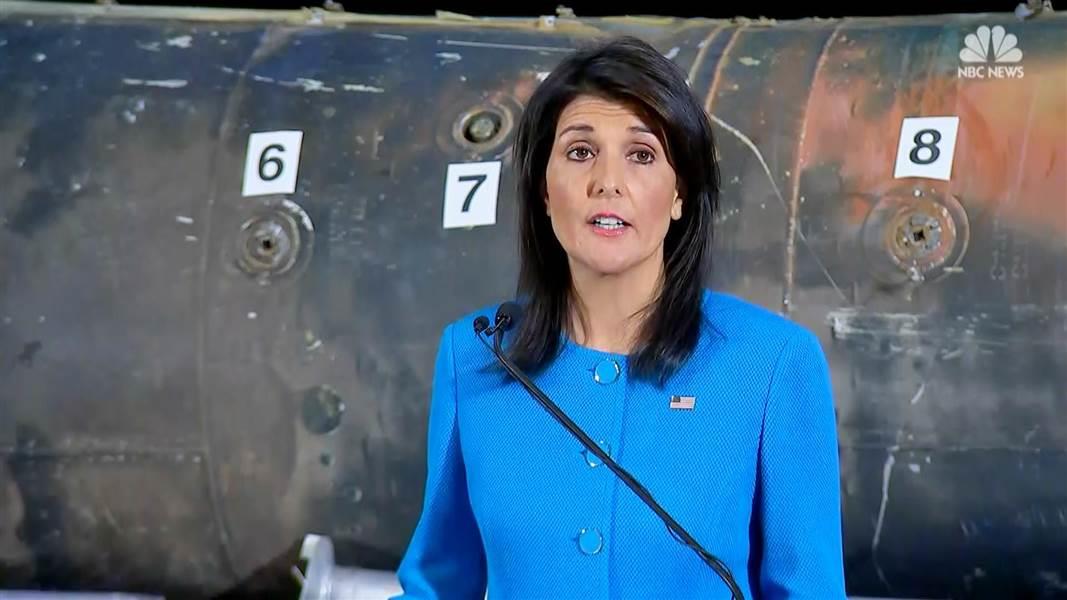 It’s really important that you be here today, because we have a story to tell, and the story is a very important one. And it’s not just important for the United States, it’s important for the entire international community. As President Trump announced on October 13, the United States is taking a new approach to Iran by focusing on all of the regime’s destabilizing behavior. That means we are focused not just on the nuclear program.
We’re also taking a hard look at Iran’s ballistic missile program, its arms exports, and its support for terrorists, proxy fighters, and dictators.
Our new strategy was prompted by the undeniable fact that the Iranian regime’s behavior is growing worse. The nuclear deal has done nothing to moderate the regime’s conduct in other areas. 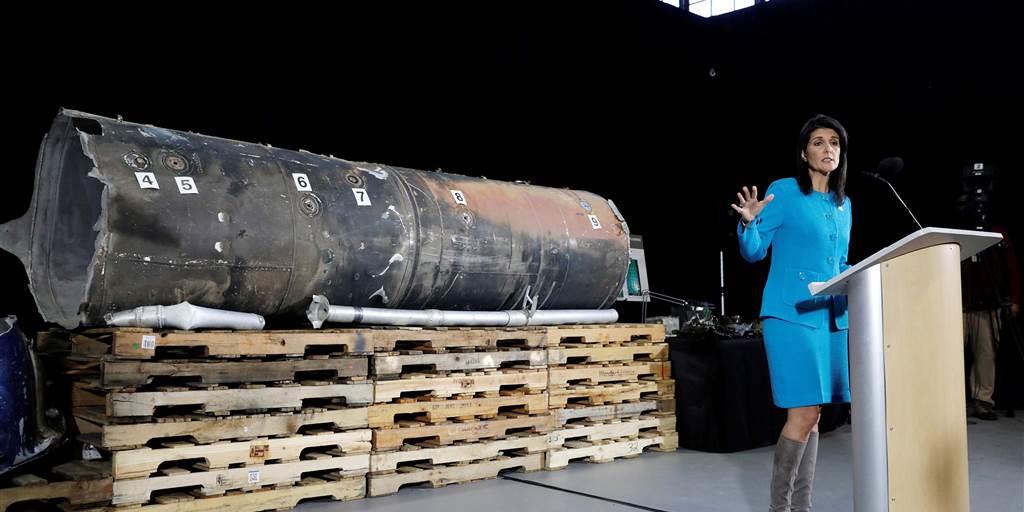 Aid from Iran’s Revolutionary Guard to dangerous militias and terror groups is increasing. Its ballistic missiles and advanced weapons are turning up in warzones across the region. It’s hard to find a conflict or a terrorist group in the Middle East that does not have Iran’s fingerprints all over it.
Four days ago, Iranian Foreign Minister Mohammad Zarif wrote an op-ed assuring the world that Iran has been misunderstood. He wrote, “Iran’s military capabilities comply with international law and are entirely defensive.”
Instead of stoking violence, Zarif promised that Iran and its partners, “labor to put out fires [while] the arsonists in our region grow more unhinged.”
But the United Nations just released a new report that tells the opposite story. It tells the story of Iran as the arsonist. The report shows the Tehran regime not putting out fires, but fanning the flames of conflict in the region.
This was the Secretary-General’s fourth report detailing Iranian compliance – or noncompliance – with UN Resolution 2231. That resolution places specific prohibitions on Iranian conduct.
In its strongest language yet, the Secretary-General’s report describes violation after violation of weapons transfers and ballistic missile activity.

The United States welcomes this report, as should every nation concerned about Iranian expansion. We are grateful for the depth of the U.N.'s inspection and analysis. Most telling, the report makes a convincing case that Iran is illegally providing the Houthi militants in Yemen with dangerous weapons. The report provides devastating evidence of missiles, conventional arms, and explosive boats of Iranian origin used by the rebels in Yemen – all of which violate UN resolutions.
The United States and our partners went to great lengths to support the UN investigations into Iranian violations by declassifying evidence so that the world could better be informed of the extent of Iran’s malign activities.
As you know, we do not often declassify this type of military equipment recovered from these attacks. But today we are taking an extraordinary step of presenting it here in an open setting. We did this for a single, urgent purpose: because the Iranian regime cannot be allowed to engage in its lawless behavior any longer. International peace and security depends on us working together against the Iranian regime’s hostile actions.
The fight against Iranian aggression is the world’s fight. The United States is acting today in the spirit of transparency and international cooperation that is necessary to defeat this threat.
In this warehouse is concrete evidence of illegal Iranian weapons proliferation, gathered from direct military attacks on our partners in the region.
Behind me is an example of one of these attacks. These are the recovered pieces of a missile fired by Houthi militants from Yemen into Saudi Arabia. The missile’s intended target was the civilian airport in Riyadh, through which tens of thousands of passengers travel each day.
I repeat: This missile was used to attack an international civilian airport in a G-20 country.
Just imagine if this missile had been launched at Dulles Airport or JFK, or the airports in Paris, London, or Berlin. That’s what we’re talking about here. That’s what Iran is actively supporting. 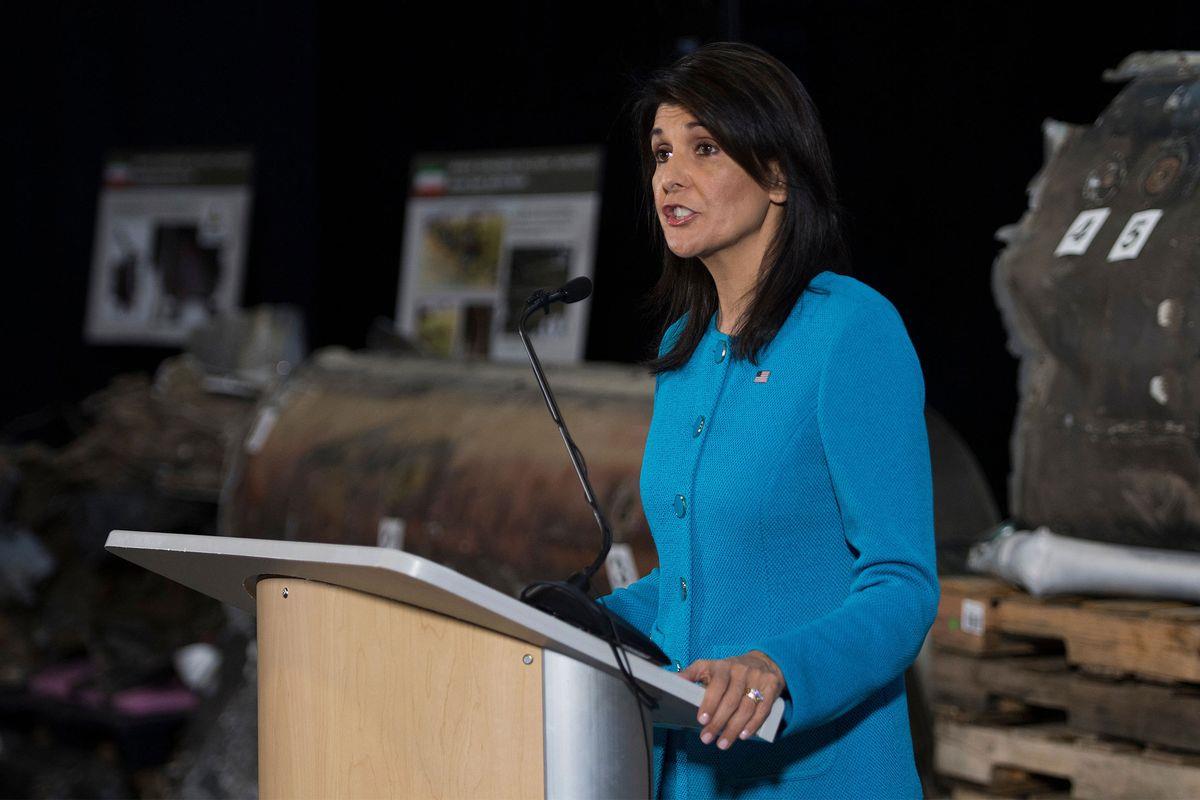 What is most revealing about this missile is what’s not here. This is a short-range ballistic missile. It is missing the large stabilizer fins that are typically present on these kinds of missiles.
The Iranian Qiam missile is the only known short range ballistic missile in the world that lacks such stabilizer fins and includes nine valves that you will see running along the length of the missile. Those valves are essentially Iranian missile fingerprints.
On your walk through, you will also see missile debris stamped with the logo of Shahid Bagheri Industries, an Iranian manufacturer.
Those are just two of the many pieces of evidence that tell us of this missile’s Iranian origins.
It was made in Iran, then sent to Houthi militants in Yemen. From there it was fired at a civilian airport, with the potential to kill hundreds of innocent civilians in Saudi Arabia.
You will see more than that. In this warehouse there is also material from an anti-tank guided missile. Such missiles have a range of over two miles and can destroy tanks, and even buildings. You will see material from an unmanned aerial vehicle, also known as a kamikaze drone, that can take out radar sites. You will see material from a SHARK-33 explosive boat. These are boats with a warhead inside them that explodes on impact. They can blow six feet wide holes in the hulls of ships.
All of these weapons include parts made in Iran, some by Iran’s government-run defense industry. All are proof that Iran is defying the international community. And not just one time. This evidence demonstrates a pattern of behavior in which Iran sows conflict and extremism in direct violation of UN Security Council resolutions.
In just a minute, Laura Seal from our Defense Department will walk you through the items gathered here and explain their connection to the Tehran regime. We welcome a thorough examination of this material, not just by the members of the press here today, but by the international community.
Several countries will be sending delegations here to view this material in the next few days. Some have already been here. We are inviting the entire UN Security Council to see it for themselves. And we are inviting all members of Congress to view it.
This evidence is part of what has led the U.S. intelligence community to conclude, unequivocally, that these weapons were supplied by the Iranian regime.
The evidence is undeniable. The weapons might as well have had “Made in Iran” stickers all over it.
The United States stands ready to share what we know to further the cause of peace. We ask our friends and our allies to do the same. Iran is determined to undermine the international consensus against its conduct.
We must speak with one voice in exposing the regime for what it is: a threat to the peace and security of the entire world. We call on all nations to join us in a united front resisting this global threat.