Tegucigalpa, AFP, December 4, 2017 - Honduras on Monday finally concluded a much-delayed count from a presidential election held more than a week ago, but refrained from declaring incumbent leader Juan Orlando Hernandez the outright winner as soldiers tried to keep a lid on simmering post-poll unrest.

The small Central American nation of 10 million, which suffers chronic violence and prolific gang activity, has been put under nighttime curfew after clashes during protests and some reports of looting.

On Friday, a 19-year-old woman was fatally shot during a confrontation between protesters and the police. Her family said she was killed by police, a claim authorities are "exhaustively" investigating.

On Monday, police said two officers were fatally shot by unidentified assailants while patrolling during the curfew in the eastern province of Olancho. The deaths were not immediately linked to the political unrest.

His supporters have taken noisily to the street, banging on pots, blaring vuvuzelas and singing campaign songs which included insults towards the conservative Hernandez. Nasralla has demanded a recount from some rural electorates.

"They are stealing our votes," a visibly angry Jesus Elviz, a 58-year-old accountant, told AFP during a march on Sunday.

Suspicions were triggered by the drawn out ballot count. 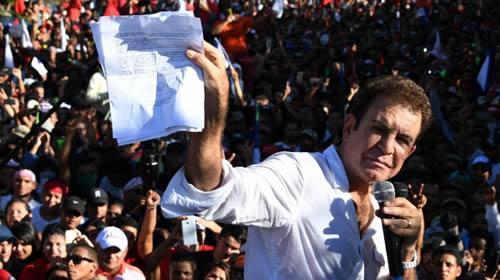 In the hours after the vote, an initial tally of more than half the ballots gave the lead to Nasralla, who claimed victory. But then his margin shrank. The Supreme Electoral Tribunal said its computers had suffered interruptions that slowed counting, but that Hernandez had emerged with a tiny lead.

But he said the tribunal was not declaring a winner yet, because of possible appeals that could go on up to late December.

"We urge all candidates and all parties to put Honduras first," Matamoros said.

A group of European Union election observers echoed that.

"The electoral process is far from finished," the coordinator of the EU group, Portuguese member of the European Parliament Marisa Matias, told a news conference in Tegucigalpa.

"Please make no declaration of the winner until the process is completed," she said.

Hernandez, a 49-year-old lawyer who has been president since 2014, had sought re-election despite a constitutional ban on serving more than one term.

His conservative National Party had argued that a 2015 ruling by the Supreme Court voided that ban.

Going into the election, he was seen as the clear favorite on the strength of his policies clamping down on Honduras' gang violence and endemic corruption.

He had backing from the United States, which is pouring $750 million into Central America's so-called Northern Triangle -- the poor, gang-infested trio of nations made up of Honduras, El Salvador and Guatemala -- to try to stem the outflow of its citizens to the US. 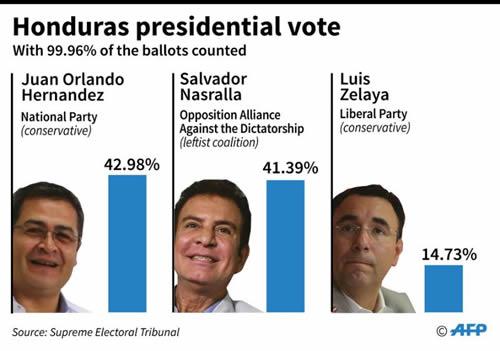 Nasralla, though, provided an upset to the voting prognostics. He and his leftist coalition, the Opposition Alliance Against the Dictatorship, denounced Hernandez's bid as illegal.

The issue of re-election is especially charged in Honduras, following the toppling of a former leftwing president, Manuel Zelaya, in a 2009 coup.

Zelaya, who had been seen as angling to change the constitution to allow for re-election, ended up returning to Honduras and is part of the coalition backing Nasralla.