AFP, 25, NOV. 2017-- Ten days after Argentina's missing San Juan submarine went silent, grieving relatives have begun mourning the loss of its 44 missing crew members with a religious ceremony Saturday, even though the navy has yet to declare them dead.

A religious service was held outside the Mar del Plata naval base, where the submarine was based, to support grieving friends and relatives. 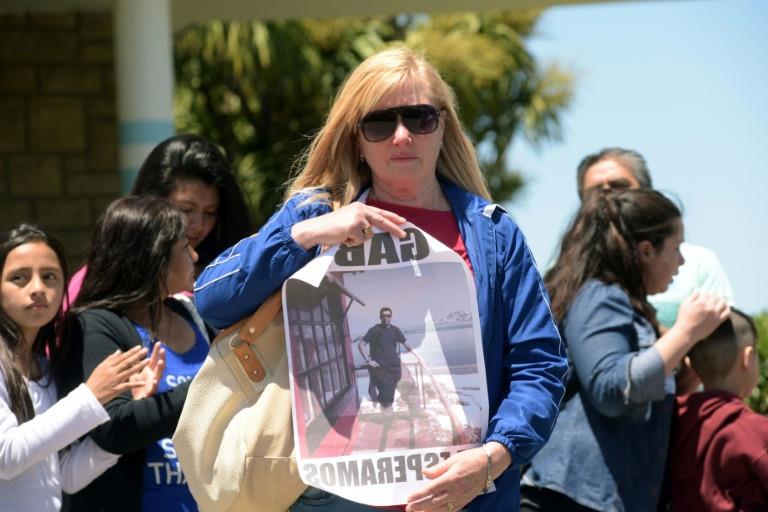 We are at a stage of hope and hopelessness

The navy has refused to say there is no chance of finding survivors.

"We are at a stage of hope and hopelessness," said spokesman Captain Enrique Balbi. "We have to be guided by firm evidence. We are focused on detecting the submarine."

But many relatives of the crew have lost hope since the navy announced Thursday that there had been an explosion on board the submarine, which experts said was likely catastrophic and linked to a battery problem. 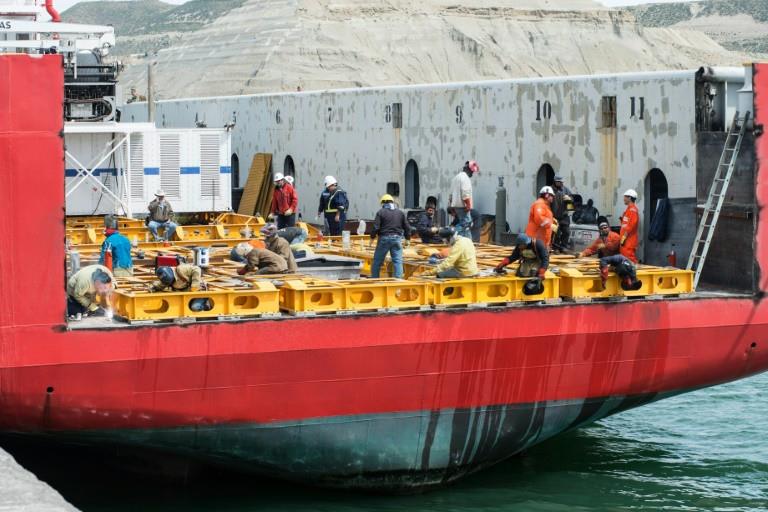 Workers weld the deck of the Sophie Siem ship, where US Navy personnel will install a capsule designed to rescue sailors trapped in the sunken submarine

Balbi told reporters that the submarine was not carrying torpedoes, thus dismissing the idea of a mishap with the explosives.

He also said that the search will continue around the clock.

A handful of relatives held out hope that at least some of the sailors aboard the 34-year-old submarine, which had recently been retrofitted, could be found alive.

Weather conditions for the search were good Saturday -- better than the difficult stormy weather of the past week -- but likely to deteriorate on Sunday.

Hopes were boosted by the arrival of a giant Russian Antonov transport plane bringing an underwater robot that can scour the ocean at a depth of 1,000 meters (3,300 feet) below the surface. 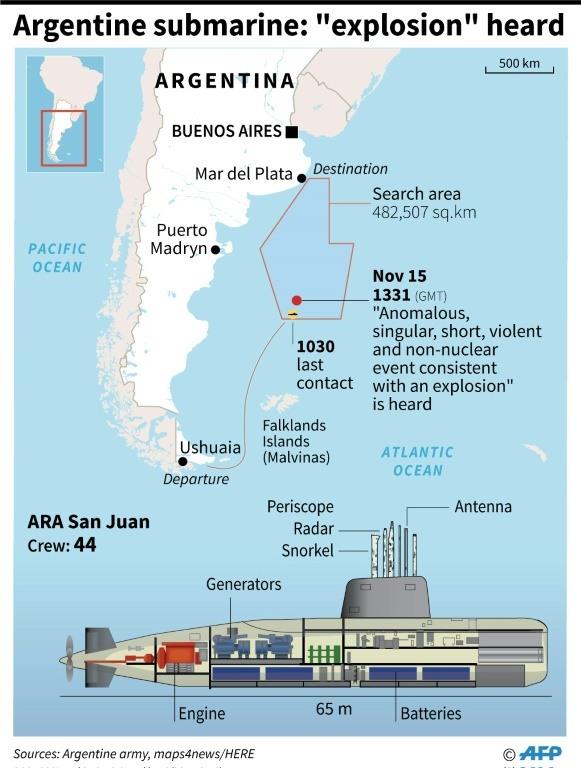 Separately, an army of welders worked frantically to create an opening in the stern of the Norwegian offshore supply ship Sophie Siem, owned by oil company Total, large enough to accommodate an underwater rescue capsule sent by the US Navy.

The US capsule can rescue up to 16 trapped submarine sailors at a time in shifts of 20 minutes, experts said.

Depths plummet from 200 meters to more than 3,000 meters on the edge of the Argentine shelf.

Experts say the sub would begin to break up once it drops below some 600 meters due to the water pressure.

The navy said one sailor escaped the tragedy because he disembarked the submarine at the port of Ushuaia on special leave to visit his ailing mother -- and was replaced by someone else.

Balbi refused to name the sailor, but local media identified him as Humberto Vilte.

A friend named Carolina said that she spoke to Vilte when his picture appeared in the papers. "He is well physically but very concerned about his comrades and friends," she told the daily La Nacion.

Vilte's Facebook page, which has an Argentine navy coat of arms crossed by a black sash, is filled with messages of condolence.

Vilte was not alone: a communications lieutenant also disembarked at Ushuaia and was ent on an urgent mission to Peru. Another lieutenant replaced him.

There was no news on the case of a third sailor who was assigned to the ill-fated sub but was exempted before it sailed because he was finalizing the purchase of a house.

President Mauricio Macri has ordered an inquiry to "know the truth" about what happened to the San Juan.

The submarine was "in perfect condition," Macri told reporters at navy headquarters Friday.

Argentina's navy has been fiercely criticized for its handling of the operation since first reporting on November 16 that the San Juan had not returned to base as scheduled.