Video: Iran’s Fake News Makes Families Work Against Each Other

News Blaze, November 1, 2017 - Only a few days after the landmark speech delivered by U.S. President Donald Trump on the Iran nuclear deal and the oppression suffered by the Iranian people, state media in Iran suddenly launched a choir publishing completely fake news about a female member of the Iranian opposition defecting from her organization.
This fake report is astonishingly linked to reports in Iran covering President Trump’s speech, which has been described as encouraging people inside the country to fuel their protests. 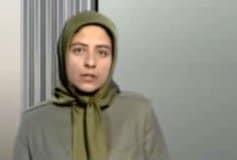 This woman, who has been the subject of an ongoing psychological war launched by Tehran, is Somaye Mohammadi. Along with other members of the Iranian opposition People’s Mojahedin Organization of Iran (PMOI or MEK), she has been relocated to Tirana, the capital of Albania, based on a trilateral agreement between the United Nations, United States and Albania.

Mohammadi says in addition to her strong personal motivations, she left Canada for Iraq years ago as suggested by her father – then a PMOI supporter – and joined the PMOI in their effort to establish freedom in Iran.

Following the 2003 occupation of Iraq, however, her father was recruited by Iranian intelligence to launch a demonizing campaign against the PMOI under the pretext of saving his daughter. He claimed she was being held in this organization’s so-called “physical and mental prisons” in Iraq. This campaign continues as we speak despite the fact that Mohammadi is currently living in a European country.
“I was shocked to hear this fake report of me defecting from the PMOI in Iran’s press and state TV stations. How could they resort to such a disgraceful false report while knowing I am still alive and will certainly deny such ridiculous allegations?” Mohammadi said in a phone interview.
She also reminded how back in 2014 the Iranian intelligence used video footage obtained by her father for a lengthy documentary titled, “An Unfinished Film For My Daughter.”
At the time Mohammadi provided her response by writing a book, “The End Of A Conspiracy.” The book exposed all of the Iranian regime’s crimes and lies during the past several years. The regime achieved this by taking advantage of her family.

Public dissent, demonstrations, and people increasing their support for the opposition escalated in 2014 due to United Nations sanctions targeting Iran’s nuclear program, Mohammadi says.
Senior Iranian regime officials admitted the threat of their entire establishment being completely overthrow was very near. To this end, Tehran entered long negotiations with Washington and Europe, enjoyed concessions under the Iran nuclear deal and escaped certain downfall.
In an attempt to diffuse the opposition’s impact, in 2014 Iran also resorted to producing a long list of movies and TV serial shows portraying a very negative image of the PMOI. “An Unfinished Film For My Daughter” was one such example. A very depressing and emotional fictional story claiming Mohammadi was separated from her family against her will by the Iranian opposition. The Iranian regime extensively awarded the director to praise the film to the highest extent.
Considering the new U.S. strategy and imposing secondary sanctions against the Iranian regime, Mohammadi says she will most likely be facing a scenario similar to that of 2014. By resorting to such lies and once again praising its propaganda movies, Tehran is attempting to save face, even for a short period, to prevent a sudden rise in the opposition’s popularity inside Iran.

“This is exactly why such fake news is first reported by state media in Iran. This movie director is a known Iranian intelligence agent by the name of Morteza Paye-. In a TV interview he said, ‘In fact, father contacted me yesterday to inform me about this. I am very happy that apparently after her mother and father I am the first individual to know.'”
Mohammadi’s claims regarding President Trump’s recent remarks encouraging popular protests inside Iran have been confirmed by other sources.
Fox News website reported just two days after President Trump’s speech covering Iran, “thousands of Iranians marched against the regime over charges of corruption. Some experts say the protesters were newly emboldened by Trump’s speech.”
Mohammadi says the fact that Iran resorts to such fictional and embarrassing movie productions in its psychological warfare against her and others in similar situations, all aimed at delivering blows to its opposition, proves Tehran’s completely desperate status against the PMOI.

Pejman Amiri is an Iranian dissident and freelance writer on Iran, who writes about news from Iran, including Iranâs efforts to export its version of violent Islamic fundamentalism. Pejman Amiri graduated from the University of Tehran.