Fighters of the Syrian Democratic Forces (SDF) dance along a street in Raqqa, Syria October 18, 2017

RAQQA, Syria (Reuters) OCT. 26, 2017 - The morning after Islamic State’s defeat in Raqqa, a local militia fighter stood in a square in the ruined, deserted city center. “There will be more problems here,” he said.

The 19-year-old, who gave his name as Moro, was one of few Raqqa natives to witness the aftermath of the battle for the Syrian city. Victory celebrations by Kurdish forces felt muted - there were no civilians left. It was the “liberation” of a ghost town. 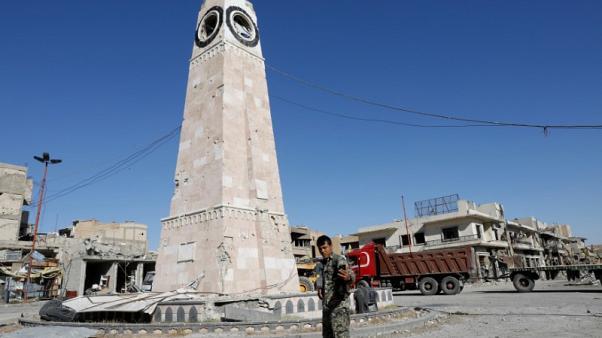 A fighter of Syrian Democratic Forces takes a selfie at a clock tower in Raqqa, Syria October 18, 2017.

“Daesh is to blame for this,” said Moro, an Arab who joined the U.S.-backed Syrian Democratic Forces militia alliance (SDF) to fight Islamic State, known pejoratively as Daesh, after fleeing Raqqa two years before.

“But not everyone will see it that way. If destruction remains, people will blame the coalition, and maybe us.”

The cost of the campaign to oust Islamic State from its former Syrian capital is the destruction of the city, the death and maiming of hundreds of civilians and displacement of tens of thousands.

SDF supporters worry resentment will turn into unrest, pitting them against those who were more sympathetic to Islamic State, or who oppose what is increasingly perceived as Kurdish control of the majority Arab city. 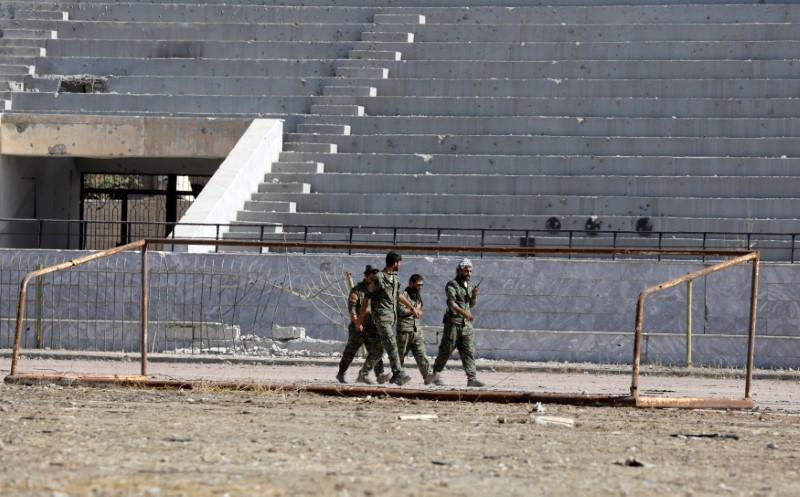 Fighters of Syrian Democratic Forces walk at the stadium in Raqqa, Syria October 18, 2017

The flags of the Kurdish YPG militia that spearheads the SDF were the first to fly above former Islamic State strongholds in Raqqa. Fighters chanted Kurdish slogans. The SDF declared the city would become part of Kurdish-led autonomy plans for northern Syria.

Many residents welcomed the U.S.-backed militias even as air strikes killed their relatives, saying the SDF at least treated them well.

But euphoria is giving way to a realization there is nothing for most to go back to. The U.S. State Department says it could be months if not longer before mines and debris are cleared and people can return.

Officials say frustration will be exploited by the SDF’s enemies: Turkey, which is fighting a Kurdish insurgency of its own, and President Bashar al-Assad, who has vowed to retake all of Syria.

Raqqa has in turn been controlled by Assad, rebel groups and then the jihadists in Syria’s six-year-old conflict. The forces now in control promise democracy and the council staffed by locals plans to hold elections.

He stood at the spot where Islamic State whipped him 130 times for missing prayers. He and his brother spied on the group for the U.S. coalition by secretly filming key locations before his brother was found out and executed, he said.

Signs of Islamic State’s brutality litter Raqqa. Fighters last week searched a former prison set up underneath Raqqa stadium. Some cells were not big enough to sit up in.

On Naeem roundabout, where jihadists held public executions, a local woman said she once counted 77 decapitated heads on spikes.

Some 260,000 people fled the fighting. For now, most live in crowded camps and abandoned buildings with barely any water, electricity, food or medicine.

Those who fled abroad are unlikely to return, relatives say.

The few locals to see Raqqa after the expulsion of Islamic State include SDF fighters and civilians who did not flee. Others are desperate to get in.

At a checkpoint on Raqqa’s outskirts, a crowd of people displaced for months argued with militiamen, demanding to inspect their houses.

“They say the area’s mined. It’s not, people have been across. You need connections. Kurds are allowed in,” Sara Hussein, 58, said.

“Has Raqqa not been freed? It’s over. We saw the parades on TV - we want to go home.”

The SDF did not immediately comment but says it fairly represents all ethnicities in areas it controls.

The residents wanted to fetch winter clothes, worrying properties would be looted. One man said the SDF questioned him and confiscated his papers.

EMPLOYEES OF THE CALIPHATE

Others have been more thoroughly interrogated. They are among those Moro fears will resent the SDF.

A former Islamic State employee, who gave his name as Abu Furqan, was pushed out of Raqqa on his wheelchair by neighbours as they fled.

The 23-year-old had lost both legs in an air strike in August, and sat outside a mosque asking Red Crescent workers for painkillers. His wounds had been sewn up in an Islamic State clinic. Raqqa has no working hospitals.

“I did odd jobs for Daesh - manning police checkpoints, and driving around distributing water to fighters. Will I be interrogated again?” he said.

He avoided questions about whether he still sympathized with jihadists or opposed the SDF, replying: “When Daesh first came, some people were more afraid of what the U.S. reaction would be,” a reference to air strikes.

The final days of the battle for Raqqa were marked by tension between the coalition and tribal leaders who demanded air strikes stop for the sake of trapped civilians while they negotiated safe exit for some militants, council officials said.

One tribal leader said the coalition should compensate bereaved families.