ABOARD THE USS RONALD REAGAN, South China Sea, Reuters, September 30, 2017 - As the commanders of the largest U.S. warship in Asia seek to maintain operational readiness amid protracted tensions over North Korea, they find themselves keeping one eye on China, too.

Officers on the Japanese-based Reagan described frequent close quarter surveillance from the ships of the People’s Liberation Army Navy in international waters.

Sometimes, they said, Chinese vessels steam in to check out the carrier en route to other destinations. Other times, Chinese frigates linger for days within the screen of U.S. ships and planes that protect the Reagan - Washington’s only carrier based outside America.

At times, the carrier crew, to ensure safe passage, will alert their uninvited Chinese escorts, should the Reagan sharply alter course, officers said. 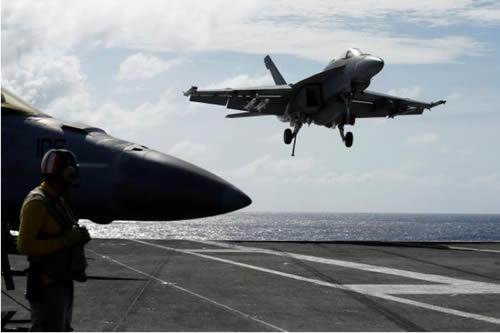 An FA-18 Super Hornet lands on the deck of the USS Ronald Reagan at the South China Sea September 30, 2017.

“We’ve had no issues. They’ve been very professional,” said Rear Admiral Marc Dalton, commander of the Reagan’s strike group, as well as the larger battle forces of the U.S. Seventh Fleet. “We see them on a regular basis,” he said.

As Dalton spoke, the midnight blue waters beyond the flight decks made for a crowded scene, with a U.S. and an allied Japanese destroyer also visible as the Reagan maneuvered some 400 nautical miles (748 kilometers) from the Chinese coast.

It provided a window into the strains of increased deployments and exercises by regional militaries, in part as they respond to the threat posed by Pyongyang’s pursuit of nuclear and missile programs.

The situation has unfolded as U.S. naval chiefs review operations to draw lessons from four significant accidents within the U.S. Pacific Fleet this year. 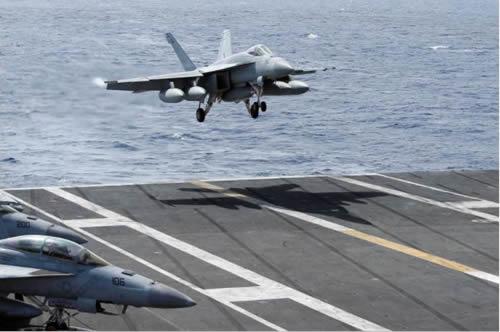 An F/A-18 Super Hornet lands on the deck of the USS Ronald Reagan in the South China Sea September 30, 2017.

A report this month by the U.S. Government Accountability Office highlighted a host of training and maintenance problems as the navy strove to expand overseas deployments and improve operational readiness.

Dalton will soon lead the carrier to a port call in Chinese-ruled Hong Kong - the first such visit in three years after a stop by another carrier was denied in 2016.

China, which claims much of the disputed the South China Sea, has long objected to U.S. military operations off its coasts, even in areas Washington insists are free to international passage.

Routinely carrying between 60-70 aircraft on board, the carrier sends between 80-100 sorties daily - the core of a dominant U.S. military presence in Asia that analysts believe China could still take years to supplant.

In recent months, the 100,000-ton Reagan has exercised with allied Australian ships as well as Japanese forces.

The South Korean defense ministry has announced it will exercise with the Reagan strike group in October.

Rear Admiral Dalton acknowledged the challenges and top-level reviews but insisted the task force was long used to keeping itself in full readiness.

“As a forward deployed force. . . we are already where we need to be to execute our missions all the time,” he said.

He did not detail any specific North Korean contingencies but described Pyongyang’s missile tests and nuclear program as a “growing and concerning danger”.

“The U.S. has been very clear about leveraging all options in order to get North Korea to change its path,” he said.