The Iranians showed off the new missile after fiery rhetoric from President Trump and threats to scrap the Iran Deal.

BY JOSEPH TREVITHICK
The War Zone, September 23, 2017 - Shortly after revealing the new Khorramshahr ballistic missile to the public for the first time, Iran released a never before seen video showing a successful test of the weapon, but did not give a date or place for the footage. The new development will undoubtedly have an impact on whether U.S. President Donald Trump and his administration to scrap a deal with Iran over its controversial nuclear program, but it also underscores long-standing concerns that the Iranian authorities have been working with the North Koreans and other allies to skirt their international obligations.

Iran’s powerful Islamic Revolution Guards Corps (IRGC), a military-political organization that commands immense influence on the country’s domestic and foreign policy, unveiled the Khorramshahr during a military parade on Sept. 22, as part of the country’s annual Sacred Defense Week. The events commemorate the country’s bloody war with Iraq between 1980 and 1988.
The city of Khorramshahr features heavily in Iran’s historical accounting of that conflict, as it was the site of the war’s first battle and remained under Iraqi control until 1982. The liberation marked a turning point in Iran’s favor and the new missile’s moniker is almost certainly a symbolic reference.

Brigadier General Amir Ali Hajizadeh, a senior commander the IRGC’s Aerospace Division told reporters that the missile had a range of approximately 1,250 miles and could carry multiple warheads, suggesting it had a so-called multiple independently targetable reentry vehicle (MIRV) configuration and could strike more than one target at a time. “As it was observed, the missile has become smaller in size and more tactical and it will be operational in the near future," he added.

The missile on parade had a single, solid nose cone, making it impossible to verify the multiple warhead claims. The video footage did not show any evidence of this feature, either. If the range figure is accurate, Khorramshahr could carry a warhead or warheads anywhere in the Middle East, including Israel and Saudi Arabia, as well as hit targets in parts of Eastern Europe, East Africa, and Central Asia.

“We will promote our defensive and military power as much as we deem necessary,” Iranian President Hassan Rouhani said in a speech before the procession. “We seek no one’s permission to defend our land.” 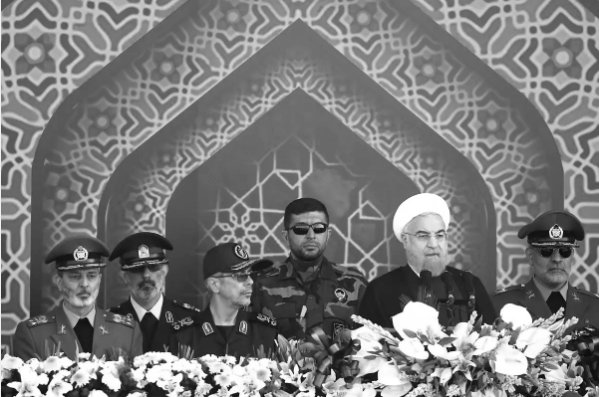 Iranian regime President Hassan Rouhani, second from right, speaks ahead of the start of the 2017 Sacred Defense Week military parade.

Rouhani’s remarks and the display of the missile itself, seem to be a response, at least in part, to fiery rhetoric from President Trump, who criticized Iran’s government during his first ever speech in front of the United Nations General Assembly and has slammed the deal over Iran’s controversial nuclear program. The Trump administration says that Iranian ballistic missile development and tests go against the spirit of that agreement.

“We cannot let a murderous regime continue these destabilizing activities while building dangerous missiles, and we cannot abide by an agreement if it provides cover for the eventual construction of a nuclear program,” Trump said in front of other world leaders and international diplomats at the United Nations on Sept. 19, 2017. “The Iran Deal was one of the worst and most one-sided transactions the United States has ever entered into.  Frankly, that deal is an embarrassment to the United States, and I don’t think you’ve heard the last of it – believe me.” 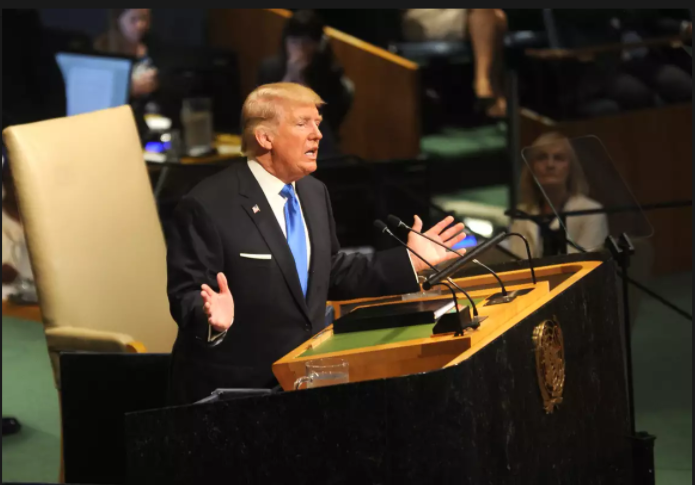 The Iran Deal, formally known as the Joint Comprehensive Plan of Action (JCPOA), does not technically cover ballistic missiles. United Nations Security Council resolutions, though, do prohibit Iran from developing such weapons, but only insofar as they can be used to deliver nuclear weapons.

Needless to say, the demonstration of the Khorramshahr has added a certain weight to calls in the United States to pull out of or otherwise reconsider the future of the JCPOA. Critics of pulling out of the arrangement say that it could only hasten Iran’s development of both newer and more advanced ballistic missiles, as well as a nuclear weapon.

However, Khorramshahr may prompt additional concerns that Iran may already be working along both of these lines with help from North Korea and other allies. Observers were quick to point out that the missile shares a number of similarities, especially in its apparent engine configuration, with the North Korean BM-25 Musudan, also known as the Hwasong-10. 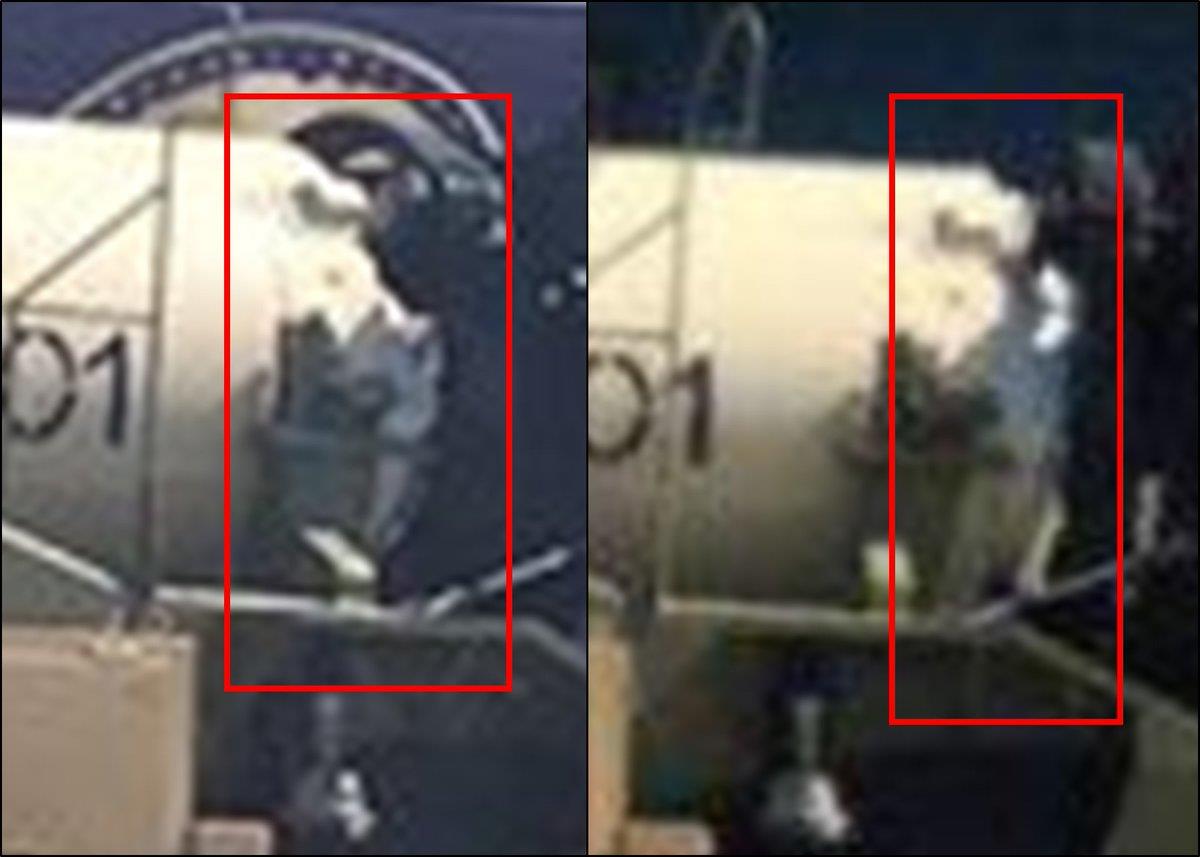 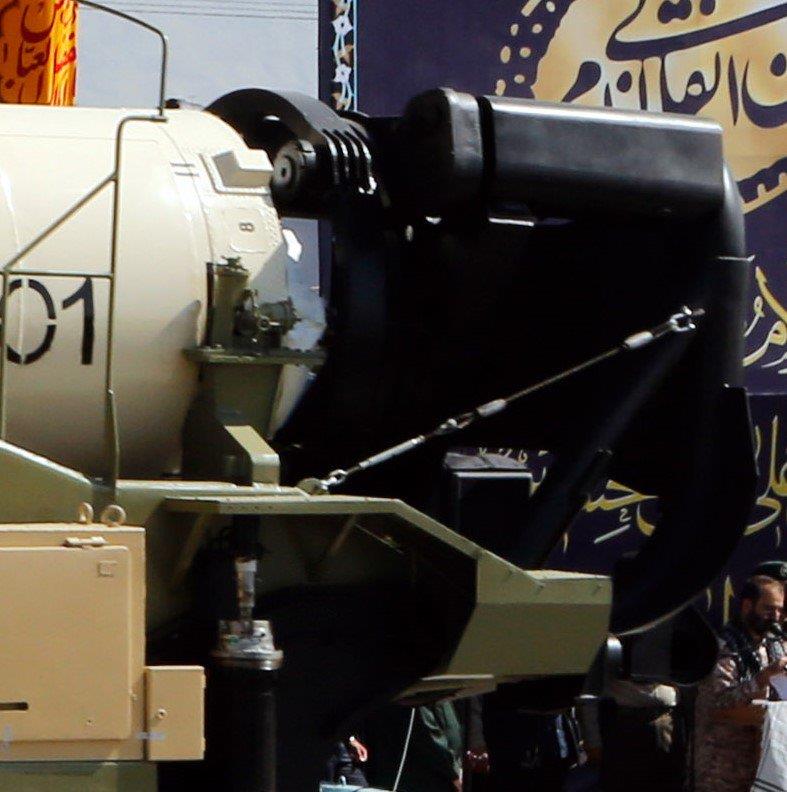 quality great but angle not quite right!

Iran claims that the new missile is an entirely domestic effort, but it makes similar statements about almost every weapon system it unveils, even those that are clearly derived from foreign designs. Its existing Shahab-3 ballistic missiles are a known derivative of North Korea’s earlier Hwasong-7. 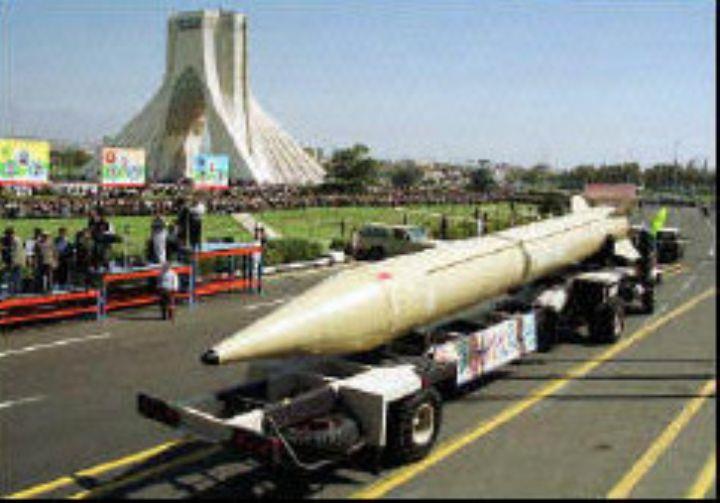 Shahab 3 on parade in Teheran

In July 2016, Fox News reported that Iran had unsuccessfully tested a Musudan, citing a number of unnamed sources. This came one month after the North Korea’s first successful launch of the type.

Then, in January 2017, Fox News said that more anonymous sources had told them the Iranians had a new, then unknown missile, with the name Khorramshahr. It reportedly flew approximately 600 miles with an unknown apogee before exploding. According to Reuters, a U.S. military official said this was the same type Iran had tested in July 2016. It is that the video shown during the opening of Sacred Defense Week 2017 was from this test.

Separately, in July 2017, Iran formally opened the Imam Khomeini Space Center near Semnan with the launch of a Simorgh space launch vehicle, which the United States and other critics say is simply a cover for work on an intercontinental ballistic missile. This launch occurred the same a month as North Korea’s first demonstration of the Hwasong-14 intercontinental ballistic missile. 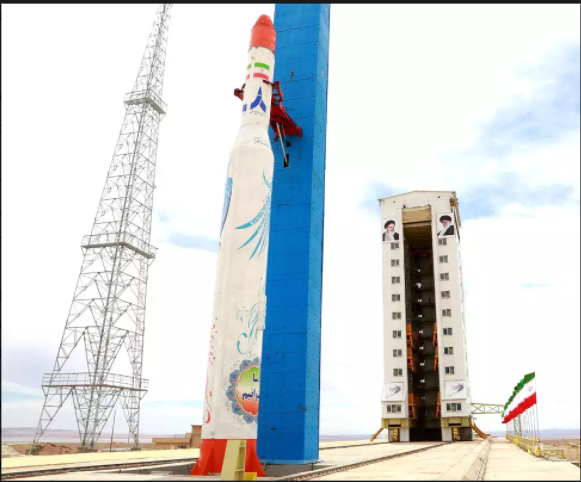 We cannot say conclusively that Iran and North Korea are actively working together on ballistic missile developments, but the timelines and past precedents heavily point to continued cooperation on advanced weapons. Though the Khorramshahr is , it is possible that this engagement could lead to improved solid fuel designs, which troops can set up and fire faster, similar to North Korea’s Pukguksong series.

“Iranian solid-propellant programs are also progressing,” the 2017 NASIC report noted. Iran already has a solid fuel weapon with the same estimated range as the Khorramshahr, the Sejjil.

We also know, thanks to a Freedom of Information Act request, that STRATCOM’s J321 Industrial Systems Analyst had been looking into someone’s solid fuel rocket motor development between July and December 2016. The briefing slide in question is so heavily redacted that it’s difficult to make out the exact objectives or targets of the but does mention earlier studies done on behalf of U.S. Pacific Command. 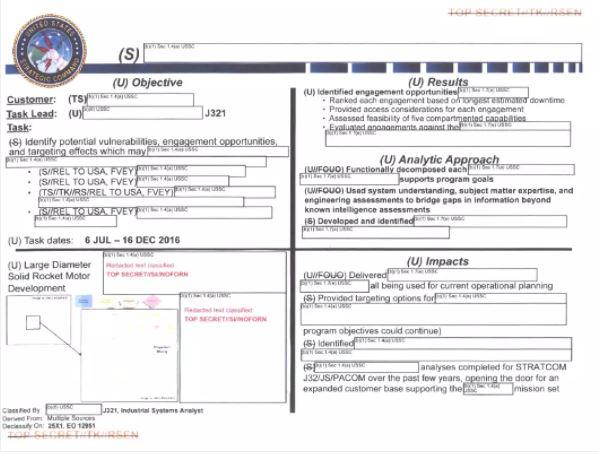 The added fear, of course, would be that if the two are working on missiles, then they could just as easily be sharing information on nuclear weapons. There has long been a concern that Iran could easily afford to halt its domestic nuclear program because it had either already completed all the necessary research or could continue it elsewhere away from the prying eyes of international inspectors.

The appearance of ballistic missile-related facilities in Syria that look similar to those Iran adds weight to the possibility that the government in Tehran has reached out to allies to help shield various advanced weapons programs for scrutiny, to support parallel developments in those countries, or both. Iran has been very open about proliferating various artillery rocket and short-range ballistic missile technology, such as the Zulfiqar missiles it fired at ISIS terrorists in June 2017, both to states like Syria and non-state actors like the Lebanese militant group Hezbollah.

“Taking a definitive stand against Trump is only the beginning of the path,” General Mohammad Ali Jafari, head of the IRGC, said after hearing Trump's comments, according to the organization's official Sepah News outlet. “What is strategically important is that America witnesses more painful responses in the actions, and decisions that Iran takes in the coming months.”

Since Iran insists it is not building any nuclear weapons, it says its ballistic missile work does not fall under the terms of these resolutions. The United States has challenged this interpretation, saying that there is limited utility in long-range ballistic missiles with conventional payloads and that it makes little sense to spend the time and energy on their development without nuclear warheads.

“The facts are that Iran is operating under the agreements signed up for under the JCPOA,” U.S. Air Force General John Hyten, head of U.S. Strategic Command, said during a talk at the Hudson Institute event. “But at the same they are , rapidly deploying and developing a whole series of ballistic missiles and testing ballistic missiles at all ranges that provide significant concerns to not just the United States, but our allies.”

According to an unclassified 2017 report from the U.S. Air Force’s National Air and Space Intelligence Center (NASIC), of the countries presently the United States know are working on new medium and ballistic missiles, only Iran has not tested a nuclear device. “Iran has ambitious ballistic missile and space launch development programs and continues to attempt to increase the lethality of its ballistic missile force,” the analysts added. 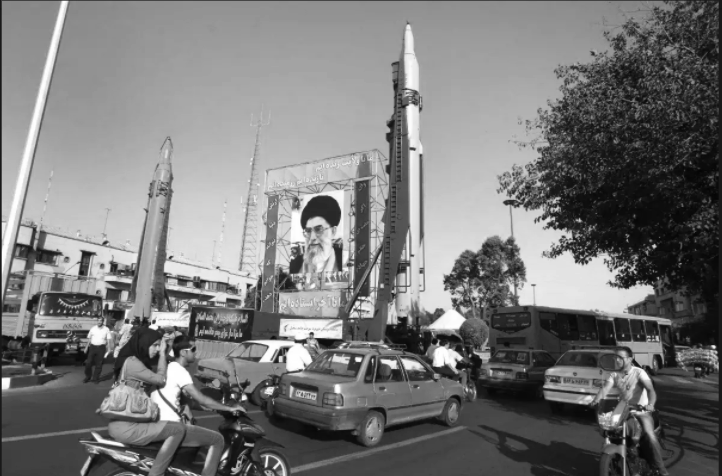 A display of IRGC missiles, including a Sejjil at left, during Sacred Defense Week in 2011.

These concerns are hardly new, of course. Since Iran Deal came into effect in 2015, there have been more than 10 reported Iranian missile tests.

“The United States is deeply concerned about Iran’s recent ballistic missile launches, which are provocative and destabilizing,” then U.S. Ambassador to the United Nations Samantha Power said in March 2016 after a series of launches. “We condemn such threats against another U.N. member state and one of our closest allies,” she added in response to Iranian remarks that the tests were meant as a clear warning to Israel.

Still, the appearance of the Khorramshahr is likely to unsettle Iran’s regional opponents, including Israel and Saudi Arabia, which are both already in the process of expanding their ballistic missile defenses. On Sept. 18, 2017, the U.S. military announced it would set up its first-ever formal base in Israel, which appeared to be an expansion of existing missile defense cooperation.

Israel is also increasingly worried about Hezbollah’s capabilities as the group receives more Iranian and Syrian support to continue operations against rebels fighting the government of dictator Bashar Al Assad in Syria. On Sept. 22, 2017, Israeli aircraft attacked a site the group controlled near the airport in Damascus, the latest intervention in that country by the Israeli Air Force.

Earlier in September 2017, Israel also struck the Syrian Scientific Studies and Researchers Center. That most reporting focused on this organization’s work on Syria’s chemical weapons program, it is also linked to ballistic missile work.

It seems possible that we could see a flurry of ballistic missile developments in Iran and among its allies in the near future. It also will be interesting to see if new Iran announcements continue to come soon after similar displays in North Korea.

Note: Many news outlets reported the launch shown in the video the Iranians released during Sacred Defense Week 2017 as new, but it remains unclear whether or not this was the case. In their English language reporting, Iranian media outlets did not frame this as a new test, suggesting that it could have been footage of the January 2017 launch. As of Sept. 23, 2017, neither the Pentagon nor the U.S. State Department released a statement about any new launch, either. Regardless, it was a clear demonstration that the missile has flown successfully on at least one occasion.