Al Arabiya, 22 September 2017 - Gone are the days when pious Shiite religious leaders rode on donkeys, in are the days of showy go-getters who ride around in BMWs and Porsches, all compliments of the Iranian political system created by the present theocratic regime.

With the lion’s share of cash generated by the country’s economy pouring into their coffers, it enables these fat cat clerics of the Tehran administration, to fill their bank accounts with billions of dollars that have been generated through the hard work of the Iranian workforce.

As far as Khamenei is concerned, money has come easy. Just like mafia bosses of the West, he pays no taxes on the cash he generates from his vast financial empire, which is said to have earned him in the region of $95 billion, a large portion of which is salted away in foreign bank accounts.

Khamenei’s riches far exceed the wealth of the late shah, who was vilified for his monetary excesses and was one of the main excuses given for the overthrow of the pro-Western monarchy.

In good old Mafia tradition, the theocrats have become adept at hiding their assets, not only in foreign bank accounts but also in foreign business ventures. The best way of describing all the members of the Tehran administration, is by the moniker of “the wealth and power mafia”, which ironically was bestowed on Hashemi Rafsanjani and his family by the state-run Fars news agency, in a revealing account it published: “Detailed report of the activities of the wealth and power mafia”. 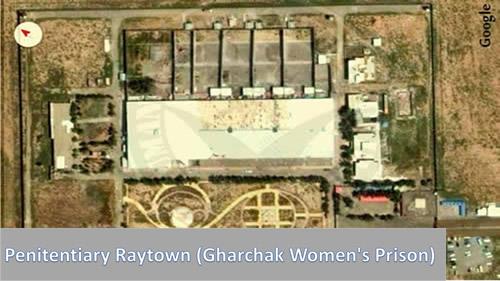 Just like most despots, terror groups and mafia clans, not only do the theocrats hide their cash in foreign bank accounts, real estate, and foreign business ventures, they also make apt use of charitable foundations, which come in very useful, as they serve as lucrative slush funds for both the theocrats and their cronies, who appear in the eyes of the public to be aiding the needy, which leaves them free of scrutiny.

The Abdulazim Religious charity has the perfect method for which to rake in the cash, often by using a business owner’s Shia conscience as a moral lever, they use deceit to relieve him of company shares, which they explain goes to aiding the “needy”. Then eventually, these wheelers and dealers coerce the proprietor into signing over the lion’s share of his business, including that of his own stake, leaving Khamenei’s cronies in charge of the funds, which become a part of Rey Investment Co, a company run by the Supreme Leader’s charity.

Where protecting their assets is concerned, just like their mafia counterparts, the Tehran regime uses violence to control their vast business empire, which on the part of the theocrats, extends to virtually all of Iran’s national assets. Over the years, it has taken large body counts for the clerical regime to remain in control of this lucrative empire, having used arbitrary killing, imprisonment, torture and character assassination against all rivals to protect it.

Another trait which has been adopted by the regime, used by both the Mafia and the Nazis is ‘hit squads’. US mobster Al Capone used them to the beneficial effect when he orchestrated the St Valentine’s Day Massacre, in which several of his opponents were machine-gunned to death by his underlings in a garage on 14 February 1929, in a bid to get rid of the rivals.

The Nazis also used such a method during the Night of the Long Knives, when from 30 June 1934 to 2 July 1934, Hitler fabricated a charge against Ernst Rohm, the leader of the three million strong Nazi militia the Sturmabteilung (SA Storm Battalion), accusing Rohm of planning a coup against him. Hitler felt that Rohm was getting too ambitious in his political aims, as he was pushing Hitler to seize power by force, while Hitler wanted to gain power through eroding democracy through political means, just like Khamenei has now done.

So, to bring an end to Rohm’s ambitions, Hitler sent out onto the streets his SS and Gestapo death squads, and during the roundup of SA commanders, Hitler used the opportunity to remove all other political rivals that might eventually stand in his way of ultimate power. The barbarity was unbelievable, many were hacked to death, others summarily executed, and it is estimated that 400 people were murdered during that bloody purge.

During the period when Khomeini was consolidating his power, anybody who voiced opposition to him also paid the ultimate price. During his 1988 purge, 30,000 dissidents – who wanted to see a more democratic form of leadership – were slaughtered in the prison system alone.

Then there was a dark period between the 1980s and 1990s when Iran’s notorious Ministry of Intelligence and Security (MOIS) sent out death squads to silence Iranian dissidents, most of whom were living abroad. During this period, the same modus operandi as the Nazis was employed. They brutally murdered both men and women in frenzied attacks, often hacking them to pieces, in a bid to scare off dissidents from speaking out against the regime. 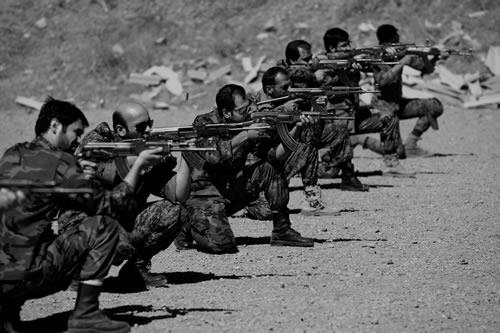 In this Thursday, Sept. 19, 2013, photo, members of the Basij paramilitary militia fire their weapons during a training session, in Tehran, Iran.

‘Serial killings’ by the regime

This string of brutal slaughter was dubbed by the press as the “serial murders”, carried out with such fervour it pointed to the perpetrator being insane, and with some of these attacks having taken place in Iran, the general public was so shocked by the brutality, they thought a madman was on the loose, and the regime was forced to investigate the incident, which was eventually placed at the door of “rogue” MOIS operators, in a bid to give the Tehran regime at least some form of “plausible deniability”.

Just like it was with Hitler, the world is blind to Khamenei’s true intentions of world domination, because it sounds too incredible. But the world once thought the same of Hitler, when Neville Chamberlain stepped off a plane claiming that Hitler was a man the world could deal with, clutching a piece of paper, which he triumphantly announced would bring “peace in our time”, and then much, in the same way, Obama claimed this with his Iran Deal.

But as far as Hitler was concerned, he set off the deadliest conflict in history, ending in the deaths of over 70 million people.So, it is time to remember that oft-repeated quote: “Those who do not learn from history, are doomed to repeat it! 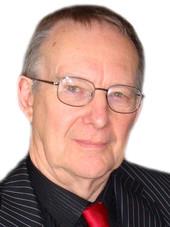