Fox News, September 20, 2017 - While Iranian President Hassan Rouhani addressed the United Nations General Assembly Wednesday, thousands of Iranian expats rallied outside to call for an end to the Islamic Republic's brutal regime.
"We want the American people to know that the Iranian people do not want a clerical regime," said Sonia Samsami, the U.S. Representative of the National Council of Resistance to Iran. "Regime change at the hands of the people is the only solution to the Iran crisis."
Samsami's group, a coalition of more than 500 Iranian opposition groups and individuals, seek a "democratic, secular and non-nuclear republic of Iran," she told Fox News. 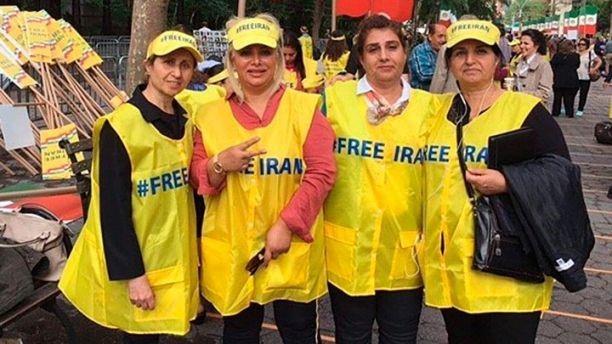 Protestors affiliated with the National Council of Resistance to Iran push for an overthrow of the Rouhani-led regime outside the United Nations on Wednesday.

The rally in midtown Manhattan came during Rouhani's speech, in which he vowed Iran would react "decisively and resolutely" if the U.S. rescinds the controversial nuclear deal struck during the Obama administration. It came a day after President Trump signaled that he might just do that while blasting Tehran in blunt terms not often heard at the UN.
"The Iranian government masks a corrupt dictatorship behind the false guise of a democracy," Trump told the world body on Tuesday. "It has turned a wealthy country with a rich history and culture into an economically depleted rogue state whose chief exports are violence, bloodshed, and chaos."
Samsami's group wants the U.S. to support opposition to the theocracy that rules Iran. The group also called on the UN to investigate the largely forgotten massacre of summer 1988, in which some 30,000 political prisoners and dissidents in Iran were systematically executed. 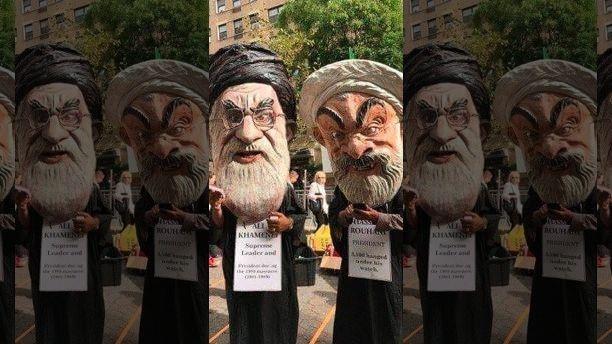 Efforts by international human rights bodies to investigate the situation were routinely blocked. But last year, a recording emerged of the high-ranking Ayatollah Hossein Ali Montazeri - who died in 2009 - condemning four officials involved in the killings, which he branded the "greatest crime committed during the Islamic Republic" for which "history will condemn" them and the regime at-large.
"For decades, the clerical regime deliberately pursued a policy of silence and it was a red line to talk about the massacre," Samsami said. "The regime's officials perpetrators of the 1988 massacre must be held to account and tried under international law."
While Rouhani is often considered to be something of a "moderate" in western diplomatic and mainstream media circles, opposition activists contend otherwise.
NCRI members note that Rouhani has increased its export of terrorists via Shiite militias in Iraq and Syria while backing Syria's President Bashar Assad in war crimes amid the long-running Syrian Civil War. 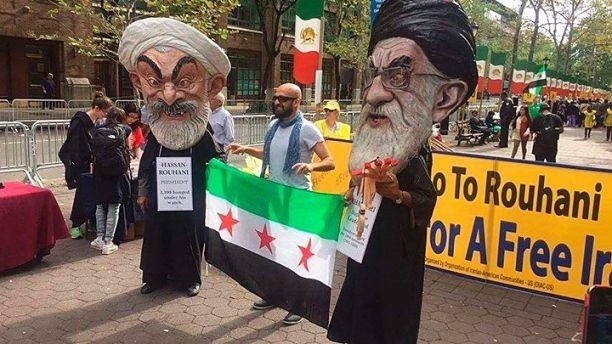 Protestors outside the UN oppose the Iranian regime's role in the bitter Syrian war and support of dictatorial President Bashar al-Assad.

In their view, Rouhani, who was recently re-elected to a second term, closed seven million websites across the country, destroyed 100,000 "" satellites and executed almost 1000 people last year alone.
Maryam Rajavi, the Paris-based president-elect of the NCRI, has laid out a plan of governance for the country she fled in the early 1980's while in her twenties.
"In the Iran of tomorrow, we will respect all individual freedoms. We underscore complete freedom of expression and the media and unconditional access by all to the Internet," Rajavi said.
Inside the UN, Rouhani told his fellow world leaders, that Iran is not only a nation devoted to "moderation" but the "bastion of tolerance for various religions and ethnicities."