Speech by Mr. Alejo Vidal-Quadras in Conference on Human Rights in Iran in United Nations (Geneva

Ladies and Gentlemen,
Thank you very much for inviting me to this timing Conference in the United Nations in Geneva.
I was comforted when I read the latest report of Ms Asma Jahangir, the UN Special Rapporteur on the Situation of Human Rights in Iran. She issued a report on September 2nd for the first time referring to the massacre of over 30,000 political prisoners in summer of 1988 mostly members and supporters of the Iranian opposition People’s Mojahedin Organization of Iran (PMOI/MEK).
In 1988 the Iranian regime carried out an atrocious massacre sending tens of thousands of political prisoners to the gallows and buried in mass, unmarked graves, all according to a fatwa, or decree, issued by the deceased Iranian regime founder Ayatollah Khomeini.
Unfortunately, the world has until recently remained silent in this regard. 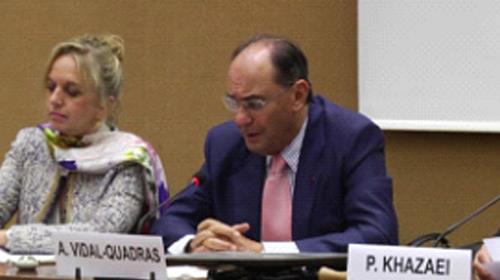 The campaign for Justice for the Victims of the 1988 Massacre in Iran was started by Madam Maryam Rajavi and has now expanded over the past year both in Iran and at international level.
I recently spoke during an exhibition organized on this tragedy by several municipal Districts in Paris and many other events have and will take place in different countries in Europe. This campaign has opened the eyes of many people in Iran and out of Iran, even inside the regime itself, and has effectively made the PMOI to be proved as the only serious and real alternative to this fundamentalist dictatorship.
I should remind you that around 800 former political prisons who were jailed by the Iranian regime, are now in Albania. They are the best witnesses to this crime. They used to be in camps Ashraf and Liberty in Iraq and are now in Tirana. I have spoken to many of them and shared with them their terrible reminds of that horror. 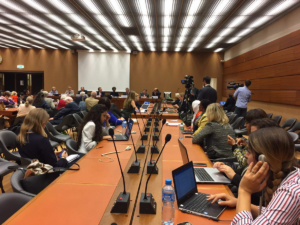 This massacre has now become a national issue for the so called Islamic Republic of Iran because it has made many people, both opposing or supporting the regime, reflect on the real nature of the dictatorship that oppresses their country.
The Call for Justice for the victims of the 1988 massacre is now a central part of the Iranian people’s resistance for a regime change in Iran.
We should not have any illusions about this regime. In his first term, Hassan Rouhani appointed a member of the 1988 Death Committee as his Minister of Justice. Now, in his second term, he has again nominated as Minister of Justice another perpetrator of the massacre in south of Iran. The European Union has already designated and sanctioned this new minister, Alireza Avayi, for being directly involved in grave violations of human rights.
It is essential that the UN Security Council refer this case to the International Criminal Court to arrange for the prosecution of the regime’s leaders and those responsible for the massacre.
I wish to use this opportunity to call on the EU and our European Governments to put human rights first when dealing with Iran. As a European I feel rather embarrassed by the current policies of the EU High Representative Ms Mogherini and her friendly relationships with the Iranian regime. We should represent European values which are freedom democracy, women rights, freedom of expression and religion. Unfortunately the EU leadership is giving a wrong message to the people of Iran who quite rightly feel that EU is only interested in trade, business, the compliance of the nuclear agreement and nothing else. The credibility of Europe and the whole free world has been severely damaged by the appeasement policies of the EU, which have been moreover failed because there has been no change in the aggressive attitude of the regime in Syria, Iraq or Yemen nor any improvement of the continuous and inhuman violations of human rights against the Iranian people.
If we want the Iranian regime to take us seriously, we need to show firmness and determination. We need to implement sanctions on the Islamic Republic of Iran for human rights violations. This is the language the mullahs understand as they did after the sanctions for the nuclear issue.
So I call on the European Governments to put human rights first and save the reputation and credibility of Europe. 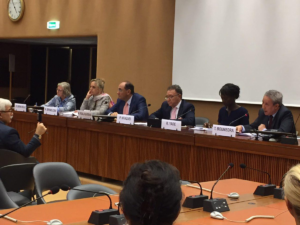 This latest report by Ms Jahangir and its reference to the 1988 massacre, has to be followed up in the UN resolutions and in the Security Council with the aim to prosecute those who were responsible for this crime against humanity and are mostly and scandalously still holding top positions in Iran.
No international order can be stable and peaceful without justice. Consequently, we need and we demand justice for the 30000 victims of the 1988 carnage in Iran. We should not waste any more time because this is a case where inaction regarding the crime is equal to collaboration with the butchers.
Thank you.