The extent of the Iranian Revolutionary Guard's meddling in Yemen 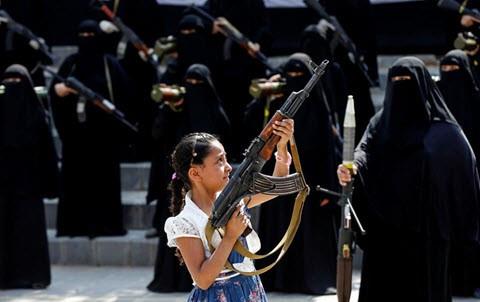 The former officer said the Houthi militia run a massive covert curriculum to train women using various weapons and boost their ability. He added that the task of providing these military training to Houthi women is coached by the regime of Iran, Iraq, Lebanon, and Syria.

Houthi militants brought these women to Yemen in 2014 by Iran airlines through dispersed routes. The Houthis, after occupying Sanaa, the former Yemeni capital, agreed with the Iranian regime that they would land 24 flights a day from Iran to Sanaa.

Al-Asemah online website, in a comprehensive report that hinted about the hidden implications of the use of women by the Houthis, highlighted the existence of a number of Iranian female instructors, as well as the use of female prisoners and the widespread recruitment of young Yemeni girls by Houthis.

The website quoting a former Yemeni presidential guard who requested anonymity for security reasons reported that over 500 Yemeni girls in Sanaa have been secretly trained under the supervision of Iranian and Iraqi mentors. He also said that the largest training camp of Houthi women is in the province of Dhamar, south of Sanaa.

"These young girls and students are being sent to military training courses by force and through threats of murder or betrayal or enticement by money,” he added.

He announced the existence of a large base in Sanaa, which is devoted to Houthi women, with special courses and recruiting for women, girls, university students and high school students. The Houthis use some mosques and state schools as a training ground of using light weapons and guiding military units.

The former Yemeni presidential guard officer also revealed that a woman relative of Abdul Malek Houthi, the leader of the Houthi coup group, is responsible for the command this center.

According to him, the Houthis use these trained women to attack the homes of the Mutamar party leaders, led by Ali Abdullah Saleh, and other groups that oppose the Houthis, as well as attacks on women's gatherings and marches in Yemen.

The website of “Al-Asemah” online also said according to one of the coaches of these courses, the Houthis are using women prisoners of the al-Amal prison as recruiting forces and training them by Iranian and Iraqi coaches.

A Yemeni student girl, identified by her initials as N.W., announced that the Houthi students were very active in the dormitory of female students, and recently they have attracted five girls from Hajeh province and are providing military training to them in the suburbs of Sanaa.