Irma weakens but 6.2 mn without power in Florida

AFP, September 11, 2017 - Monster storm Irma, which ripped a deadly path through the Caribbean, started to weaken Monday though it was still whipping parts of Florida with fearsome winds and rain, leaving 6.2 million people without power.
The death toll jumped to at least 40 as Cuba said 10 people had been killed there over the weekend as the storm carved a path northward. The Cuban victims died from causes ranging from electrocution to drowning, building collapse and a balcony falling on a bus, authorities there said.
Meanwhile, Florida residents in the storm's wake who spent an anxious night huddled indoors began to venture out to survey the damage, which largely did not seem to be as bad as initially feared.
Irma was downgraded to a tropical storm early Monday as it spun northward through Florida, but forecasters warned of hazardous storm surges and "some wind gusts to near hurricane force."
Maximum sustained winds had decreased to 70 miles per hour (110 kilometers per hour) as of 8:00 am (1200 GMT). Irma was about 105 miles (170 kilometers) northwest of Tampa on Florida's west coast, and expected to cross into Georgia Monday afternoon.
Authorities in Jacksonville, in northeast Florida, declared a flash flood emergency, as dangerous storm surge overwhelmed parts of downtown and other areas.
Warnings of storm surges remained in place in several areas of south and central Florida, including the heavily populated Tampa Bay region. 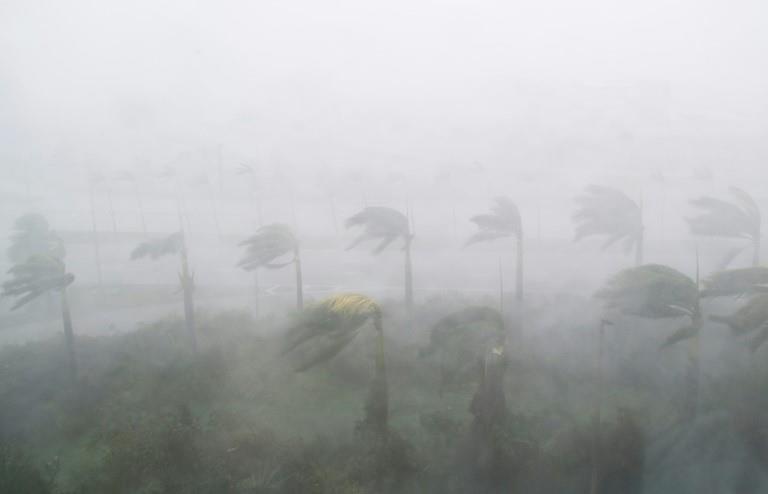 Heavy winds and rain from Hurricane Irma in Miami, Florida on Sunday

"As little as six inches (15 centimeters) of moving water can knock you down," tweeted the state's governor Rick Scott.
"Stay inside. Stay safe," he added. "The combination of a dangerous storm surge and the tide will cause normally dry areas near the coast to be flooded."

Irma had triggered orders for more than six million people in the United States to flee to safety, one of the biggest evacuations in the country's history.
The storm roared ashore on the Florida Keys island chain on Sunday as a powerful Category Four hurricane, ripping boats from their moorings, flattening palm trees and downing power lines, after devastating a string of Caribbean islands.
As of Monday morning, 6.2 million customers were without power in Florida, according to the state's Department of Emergency Management. Florida Power and Light said it had "safely shut down" one of two nuclear reactors at its Turkey Point power plant. 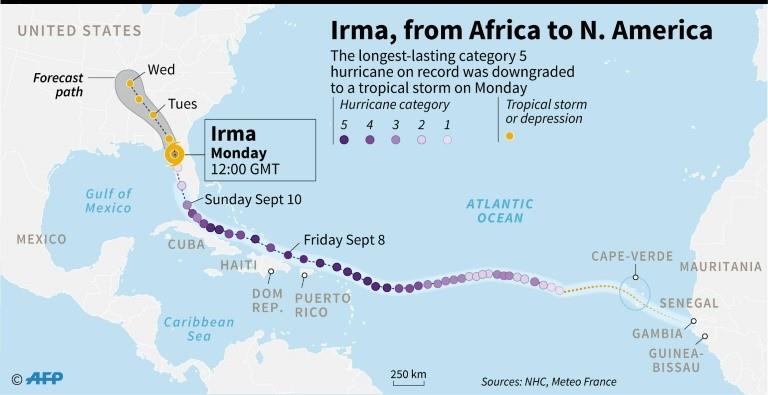 In flood-prone Miami, the largest US city in Irma's path, cleaning crews began clearing branches, debris and fallen street signs from downtown and the Brickell financial district at dawn on Monday. Though Irma's approach caused two construction cranes to collapse, the city appeared to be spared from major damage.
The sea had swallowed the coastal walkway of glitzy Brickell Avenue in the center of Miami on Sunday, flooding the streets and leaving cars half-submerged.
By Monday morning, most Miami streets were drying up, though they were covered with debris.
"If this had been a Category Four hurricane, the whole scenario would have been completely different. We wouldn't have power for weeks, and we just got the power restored this morning," said resident Bob Lutz, 62, who had ignored evacuation orders and holed up with a week's worth of food and water.
"If we had evacuated, we maybe had evacuated to Tampa or Naples, which would have been right into the storm."
In Bonita Springs, on Florida's hard-hit southwest coast, large areas were flooded and the entire city was without power. Some residents were trying to reach their homes by walking through floodwater up to their waists, while others paddled canoes.
"I don't think I can make it over to the house. I'd like to walk through there, but it looks like it's three feet (one meter) deep at least, and my boots are only a foot deep and I don't like cold water, which explains why I live here," resident Sam Parish told AFP.
The streets were completely blocked by branches and there appeared to be thousands of downed trees.
The scope of damage in the hard-hit Florida Keys was not immediately clear. Scott, the governor, said he had received "spotty reports."
"I'm going with the Coast Guard down to see the Keys, I've heard that there is some significant damage in the Keys right where the eye of the storm hit. So we will find out," he told NBC's "Today" show Monday morning. 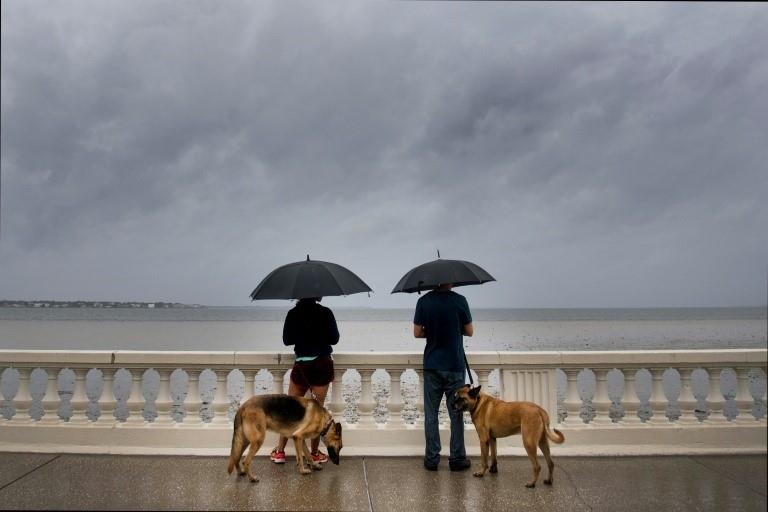 A couple look at the receding water as they walk their dogs on Bayshore Boulevard in Tampa, Florida

Most Keys residents had followed mandatory evacuation orders, but there were some holdouts who had to hunker down as Irma tore over the island chain popular for fishing and scuba diving.
As residents began to check out their homes, authorities warned of downed power lines, raw sewage in floodwaters and -- this being Florida -- displaced wildlife like snakes and alligators.

President Donald Trump, who promised to travel to Florida "very soon," approved the state's request for emergency federal aid to help with temporary housing, home repairs, emergency work and hazard mitigation.
"Right now, we're worried about lives, not cost," Trump said.
Before reaching the United States, Irma smashed through a string of Caribbean islands from tiny Barbuda on Wednesday, to the tropical paradises of Saint Barts and Saint Martin, the US Virgin Islands, Puerto Rico, the Dominican Republic, Haiti and the Turks and Caicos. 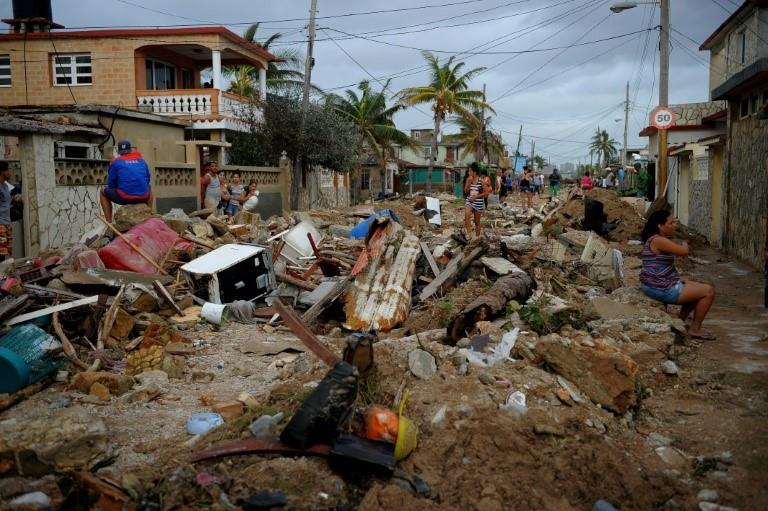 Debris lies piled in the streets of Cojimar in Havana after the passing of Hurricane Irma on September 10, 2017

Terrified Cubans who rode out Irma in coastal towns -- after it made landfall Friday on the Camaguey archipelago as a maximum-strength Category 5 storm -- reported "deafening" winds, uprooted trees and power lines, and rooftops blown off.
Enormous waves lashed the Malecon, Havana's emblematic seafront, with seawaters penetrating deep into the capital.
Residents in the old colonial city were waist-deep in floodwaters after Irma cut power and forced the evacuation of more than a million people.