AFP, Sept. 4, 2017 - A total of 87,000 mostly Rohingya refugees have arrived in Bangladesh since violence erupted in neighbouring Myanmar on August 25, the United Nations said Monday, amid growing international criticism of Aung San Suu Kyi.
Thousands of the stateless Muslim minority have fled mainly Buddhist Myanmar and poured over the border since the latest round of fighting broke out.
Their arrival has piled yet more pressure on already overcrowded camps in Bangladesh and raised fears of a humanitarian crisis as aid agencies struggle to cope with the influx of mainly women and children.
Around 20,000 more were massed on the border waiting to enter, the UN said in a report.
Dhaka stepped up border controls after the latest round of violence, but one Bangladeshi border guard told AFP the sheer number of people desperate to enter the country from Myanmar's western state of Rakhine had made it impossible to keep them out.
"It is bigger than the last time," said the guard, who asked not to be named, referring to the influx of refugees that followed an outbreak of violence last October.
"If it continues then we will face serious problems. But it's impossible to stop the flow: these people are everywhere."
Many of the new arrivals lacked shelter from the heavy monsoon rains, and an AFP reporter said hundreds of new makeshift shelters had sprung up on the outskirts of the existing camps in recent days.
"It has been raining frequently since last week. We have to keep our children safe from being sick," said Amena Begum, a newly arrived mother of five.
Rakhine has been a crucible of religious violence since 2012, when riots erupted. Scores of Rohingya were killed and tens of thousands of people -- most of them from the Muslim minority -- were forced into displacement camps.
But the current round of fighting, which broke out when Rohingya militants ambushed security installations, is the worst yet.
Myanmar's army has said nearly 400 people have died in the fighting that ensued, including 370 Rohingya militants.

On Monday the office of Myanmar's de facto leader Suu Kyi said the military had fought 90 separate clashes with Rohingya militants since the ambushes.
In a statement it said more than 2,600 homes had been destroyed in Rohingya villages and 138 houses had been destroyed in non-Muslim villages -- blaming the fires and other damage entirely on the militants.
Suu Kyi is under increasing fire over her perceived unwillingness to speak out against the treatment of the Rohingya, who are viewed as interlopers in Myanmar.
The Nobel peace laureate, a former political prisoner of Myanmar's junta, has made no public comment since the latest fighting broke out.
"Over the last several years I have repeatedly condemned this tragic and shameful treatment," Pakistani activist and fellow Nobel peace prize laureate Malala Yousafzai said in a statement about the Rohingya crisis on Twitter.
"I am still waiting for my fellow Nobel laureate Aung San Suu Kyi to do the same."
The crisis threatens Myanmar's diplomatic relations, particularly with Muslim-majority countries in Southeast Asia where there is profound public anger at the treatment of the Rohingya.
Indonesia's foreign minister Retno Marsudi met Suu Kyi as well as Myanmar's army chief General Min Aung Hlaing in Naypyidaw on Monday to press for greater efforts to alleviate the crisis.
Bangladesh, already home to an estimated 400,000 Rohingya before the latest influx, has also come in for international criticism for pushing people back to Myanmar.
Rights groups say this is a contravention of its international obligations.
On Monday officials on the small island of St Martin's nine kilometres (around six miles) off Bangladesh's coast said authorities had forced 2,011 Rohingya seeking refuge there to leave.
Elected official Farid Ahmed said children were among the refugees who were rounded up on Sunday evening before being taken back to Myanmar by boat.
"Rohingya children were crying. But it is the government order. What can we do?" Ahmed told AFP.
"They (Rohingya) said, where should we go? They (Myanmar forces) were killing us there. Our houses were burnt. They were firing at us."
Scores of people have drowned while attempting to flee the violence, which also killed or displaced ethnic Rakhine Buddhists and other tribal groups allegedly targeted by Rohingya militants. 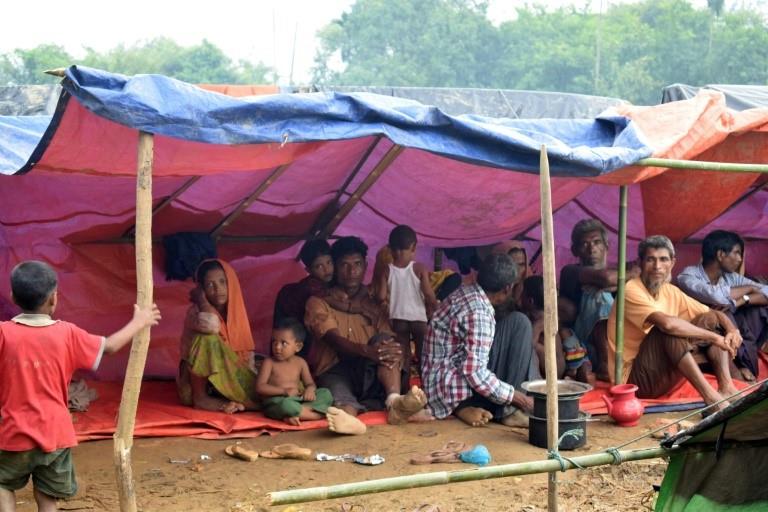 Rohingya refugees rest under a tent in a meadow in Ukhiya, Bangladesh

The refugees say that many young Rohingya men have stayed behind to fight.