Paris, AFP, 28 August 2017 - Seven African and European leaders met in Paris on Monday to try to build a "new relationship" aimed at stemming the flow of migrants into Europe from northern Africa in return for aid.

French President Emmanuel Macron met with his counterparts from Niger and Chad, along with the head of the Libyan unity government Fayez al-Sarraj.

Niger and Chad are transit points on the route to Europe through war-torn Libya.

The meeting "may constitute the start of a new relationship between Europe and Africa," the interior ministers of Italy, Chad, Niger, Mali and Libya said in a joint statement after meeting in Rome.

France is seeking improved border controls and patrolling of the waters around Libya -- a mission complicated by the existence of two competing governments and a general sense of lawlessness in the desert state. 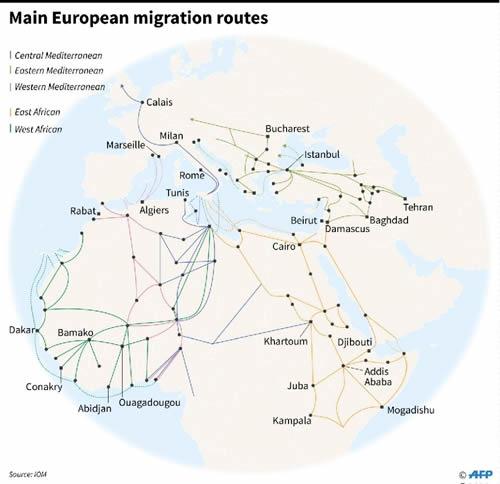 Some 125,000 migrants have crossed the Mediterranean by boat this year

European countries have long sought to cut off clandestine immigration routes into the continent.

A controversial accord with Turkey last year stemmed the flow of migrants across the Aegean Sea to Greece, one of the main channels.

But other routes have come back into use, including via Morocco and Spain.

This year alone, some 125,000 migrants have crossed the Mediterranean by boat, according to UN figures, with the vast majority landing in Italy.

European nations are keen to offer development aid and funding to their African partners in return for help in stemming the flow of migrants and asylum seekers.

Also in July, Macron proposed -- without consulting his allies -- the creation of so-called "hotspots" in Africa where asylum seekers could lodge a request to travel to the EU, avoiding a perilous voyage across the Mediterranean in a smuggler's boat.

Charities that help migrants have criticised attempts to stop migration at its source. "We're extending the European border farther and farther away," Eva Ottavy of the French charity Cimade told AFP.

Monday's meeting might provide insight into why arrivals have plummeted in recent weeks from Libya, the main route into Europe since the pathway from Turkey into Greece was shut down in 2016. 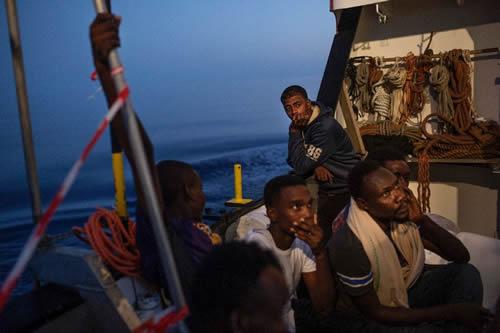 Migrant arrivals from Libya have plummeted in recent weeks

The numbers arriving in Italy have fallen by around 50 percent in July and August compared with last year.

Possible reasons include improved action by the Libyan coastguard and tougher border controls in transit countries, as well as Libyan militias being recruited into efforts to stop boats leaving.

Libyan leader Sarraj, whose government controls only part of the coastline, is expected to ask European leaders to work to lift an arms embargo imposed in 2011 so that he can arm coast guard and customs officers.

The president of Niger, Mahamadou Issoufou, will tell his European counterparts that he has managed to reduce the number of migrants passing through the transit town of Agadez in his country by 80 percent, a source in his team told AFP.

Libya has also sought to restrict the work of NGOs operating rescue boats in the Mediterranean that pick up migrants stranded on inflatable dinghies or other unseaworthy crafts.

Some political right-wingers have accused the groups of unintentionally encouraging migrants to attempt the crossing, as they know they will be rescued in the event of an emergency.

An Italian code of conduct that has divided NGOs is set to be approved by all the countries attending Monday's meeting, according to the Italian news agency ANSA.

"Above all, we have to save lives, we have to avoid situations where migrants and refugees put their lives in danger to reach protection," said Ralf Gruenert, France's representative of the UN refugee agency UNHCR.