HONOLULU, Reuters, JULY 15, 2017 - Three people were killed and at least five others suffered injuries and were taken to the hospital on Friday in a fire that consumed three floors of a 36-story condominium tower in Honolulu, city officials said.

The fire at the Marco Polo high-rise building was brought under control at about 6:30 p.m. local time, four hours after the blaze began, Honolulu Mayor Kirk Caldwell said during a news conference.

"We have a very tragic situation with three confirmed fatalities," Caldwell said. "The good news is that the fire is now under control."

For hours, thick black smoke poured from the building as orange flames raged on several floors and debris fell from windows in images broadcast by bystanders on the Periscope streaming service.

More than 100 firefighters battled the blaze, spraying water on flames from nearby balconies as a helicopter circled above, images posted online showed.

The fire began on the 26th floor of the building at about 2:15 p.m., and quickly spread to the two floors above, the Honolulu Star-Advertiser newspaper said.

The cause of the fire was not immediately known.

As many as three people died on the 26th floor, Fire Chief Manuel Neves told a news conference at the scene. He did not provide details of the deaths. 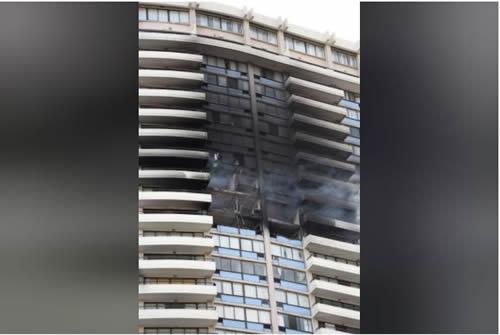 The Marco Polo apartment building after a fire broke out in it in Honolulu, Hawaii, July 14, 2017.

"We don't have any information for us to believe that there are problems with the structure," Neves said.

Neves said fire officials were conducting a room-by-room search, a task that could take several hours.

Emergency responders said they took at least five people to the hospital with injuries. A number of other people were treated at the scene and refused to be taken to the hospital, fire officials said.

Evacuees from the building were being accommodated at a nearby park, with volunteers tending them, the Hawaii Red Cross said on social network Twitter.

The fire forced the closure of a major road in front of the condominium complex, the Honolulu police department said on Twitter.

The Marco Polo building does not have a sprinkler system, Neves said. The building was constructed in 1971, before the city began requiring sprinkler systems and mandating them for high-rises built after 1974, the Star-Advertiser newspaper said. 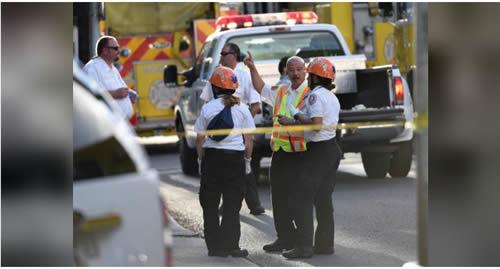 City officials told the newspaper that if the building had a sprinkler system, the fire would have been contained to the original unit.

In London, at least 80 people were killed when a fire gutted the 24-story Grenfell Tower apartments on June 14.

Authorities have opened two major investigations into the blaze, the worst in the British capital since World War Two, and have said criminal charges could be forthcoming.