American Thinker, July 9, 2017-- There are rare moments or events that either change the world or mark the beginning of a domino effect. Some events impact only a single country, while others spread out and touch every continent on earth, such as the fall of the Berlin Wall. Today the world is more dangerous than it has ever been. Bloodshed, terrorism, violence, political instability, ballistic missiles, all highlight the need to look for and locate the first and most important source of violence: the mullah-led regime in Iran. 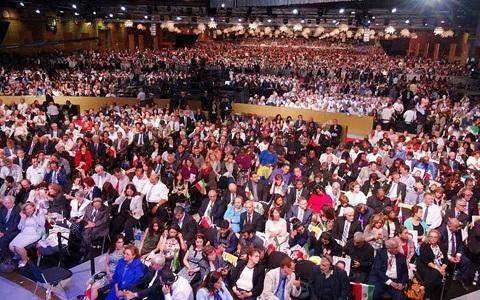 The National Council of Resistance of Iran holds a boisterous rally each year in France with current and former U.S., European and Middle Eastern officials speaking out in support of regime change in Tehran

In an underreported event in Paris, tens of thousands of Iranian dissidents gathered on July 1, 2017 to express their support for regime change in theocratic Iran.
The rally condemned the regime’s flagrant violation of human rights and rebuked its ballistic missile program, as well as its destabilizing role in the Middle East. The participants cried loudly: terrorism and bloodshed will not end until Iran’s political regime is obliterated.

The annual Grand Gathering of the Iranian Resistance and its president-elect for freedom and democracy, Maryam Rajavi

The rally was organized by the People’s Mojahedin Organisation of Iran (PMOI-MEK), who was the first to expose the very existence of Iran’s nuclear program two decades ago.
The gathering has been addressed by hundreds of prominent international personalities, many high-level politicians, political leaders, military officials, religious leaders, and former diplomats from around the world. Such as:

Prince Turki Al-Faisal called for Iranian Supreme Leader Ayatollah Ali Khamenei and Iranian officials to be brought to justice for their “crimes against the Iranian people,” whom he described as the “first victims” of the Iranian regime.

The former New York City Mayor Giuliani asserted that: the new U.S. president’s view is far different from that of his predecessor, who led world powers to dramatically ease sanctions on the Iran with the 2015 Iranian nuclear accord.

Mr. Trump is “laser focused on the danger of Iran to the freedom of the world,” he added, unlike the Obama administration.

“You, I, my government and your leadership, we see Iran in exactly the same way. The regime is evil and it must go. FreebIran,” said Mayor Giuliani.

Mrs. Rajavi the President-elect of Iranian resistance condemned the “religious dictatorship” of Iranian Supreme Leader Ali Khamenei and asserted that the regime is run by “executioners,” who’ve imprisoned or killed tens of thousands of opposition figures since coming to power in 1979.

Mrs. Rajavi called Iran’s recent election a “sham” and accused President Hassan Rouhani of complicity “in all of the regime’s crimes against the Iranian people.”

“Overthrow is possible and within reach,” she said. “Iranian society is simmering with discontent and the international community is finally getting closer to the reality that appeasing the ruling theocracy is misguided.”

“The only solution is regime change,” said Mrs. Rajavi,
The IRGC must be placed on the blacklist, the mullahs must be isolated by the international community, and Iran’s seats must be handed over to the Iranian Resistance
She welcomed the statements made at the Arab, Islamic, American Summit in Riyadh against the Iranian regime and said, “The ultimate solution to the crisis in the region and confronting groups like ISIS, is the overthrow of the Iranian regime by the Iranian people and Resistance.”

“The Trump administration is undertaking a 90-day review of its policies toward Iran. At a meeting on Saturday in Paris, the former American ambassador to the United Nations, John Bolton, said he was certain the Trump administration would make a change in the leadership in Tehran a priority of its Iran policy.” the New York Times wrote on July 2, 2017.
How can we sum this up?

Crucial events are powerful if we stand firm to act at right time, the voice of the event and our decision will be felt all over the world and will shape the future and accelerate the attainable goal. Reactionary forces and dictators definitely cannot tolerate it.

Hassan Mahmoudi:  MSc California State University, Sacramento is a human rights advocate, a member of journalism for human rights, and writer for American Thinker. He is up to date on all current affairs including political and economic issues on Iran and the Middle East.