PHNOM PENH, CAMBODIA, Reuters, Jul 10, 2017 - Cambodia's parliament on Monday amended the law to ban people from associating with anyone convicted of a criminal offense, a move the opposition says aims to hobble rivals of Prime Minister Hun Sen ahead of a general election next year.

Hun Sen's ruling Cambodian People's Party (CPP) voted to change the election law to ban political parties from engaging with such individuals, who also face bans on participating in politics through images, audio recordings and writing.

Political parties which violate the law face a five-year suspension or could be dissolved.

The amendment effectively bans former opposition leader Sam Rainsy, who lives in exile in France to avoid arrest in a number of convictions, from campaigning from abroad for the Cambodia National Rescue Party (CNRP).

"The proposed law is politically motivated and is a political pressure on individual rights, the party and on rivals," the CNRP said in a statement.

The ruling CPP denied the changes were a bid to rein in the opposition.

"These amendments are aimed at promoting the rule of law ... and strongly respect multi-party democracy," CPP lawmaker Cheam Yeap told parliament before all 66 lawmakers present voted to back the changes. 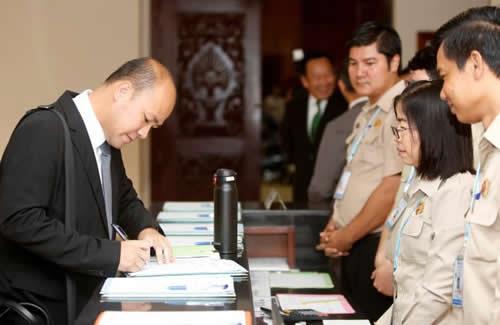 Hun Many (L), lawmaker of the ruling Cambodian People’s Party (CPP) and a son of Cambodia’s Prime Minister Hun Sen is pictured before a plenary session at the National Assembly of Cambodia, in central Phnom Penh, Cambodia, July 10, 2017.

Hun Sen has ruled Cambodia for more than three decades and has shown no signs of wanting to relinquish power.

The opposition CNRP did not fare badly in the vote, which many saw as a litmus test of its position ahead of the all-important national poll, winning about 43 percent of the vote.

Commenting on the change to the law, ASEAN Parliamentarians for Human Rights said the CPP was expanding its harassment of the opposition.

Hun Sen proposed the amendments last month with the aim of removing Sam Rainsy from the political equation, one analyst said. 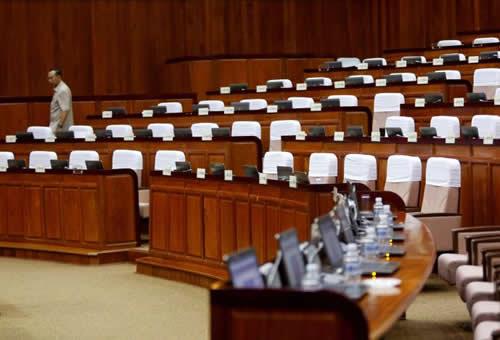 A man prepares at the National Assembly of Cambodia before a plenary session, in central Phnom Penh, Cambodia, July 10, 2017.

"This is the CPP's way of consigning Rainsy to an early retirement, but expect him to continue his campaign against Hun Sen from abroad," said Sebastian Strangio, author of the book "Hun Sen's Cambodia."

Strangio said the impact on the CNRP remains to be seen as current opposition leader Kem Sokha has shown that he is able to lead the party on his own.

Sam Rainsy resigned from the CNRP in February before a law was adopted to bar those convicted of an offense from seeking office.

He continues to be an active voice in Cambodia's politics, however, posting comments on social media platforms.