ROME, AP, June 29, 2017  — Italy’s leader pressed his European Union allies Thursday to take in more migrants, saying the relentless arrival of tens of thousands on Italy’s shores is putting his country under enormous strain. He spoke after 10,000 migrants were pulled to safety from the Mediterranean Sea in the last few days alone and were heading to Italy.

With an election due in less than a year, political pressure is building on Italian Premier Paolo Gentiloni’s center-left government to push for relief from fellow EU nations.

Flanked by EU national leaders and EU officials at a news conference in Berlin, Gentiloni said the growing number of arrivals “puts our welcome capability to a tough test.” 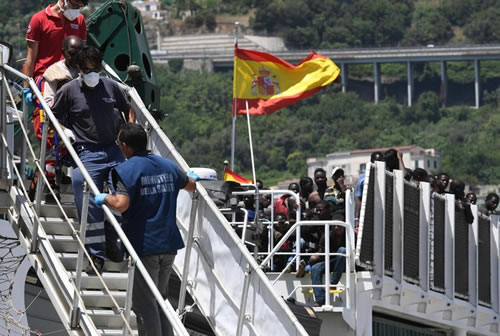 Migrants disembark from the Spanish ship ‘Rio Segura’ in the harbor of Salerno, Italy, Thursday, June 29, 2017

Italy has already taken in hundreds of thousands of migrants in the last few years. Some estimates say 220,000 migrants could land in Italy by the end of 2017.

In addition to those who arrive, over 2,000 migrants have died trying to cross the Mediterranean this year, according to the U.N.

“It’s a country under pressure, and we ask the help of our European allies,” Gentiloni said, when asked about reports that Italy is considering blocking its ports to non-Italian NGO ships that pluck to safety migrants from distressed dinghies and other unseaworthy boats off the Libyan coast.

While acknowledging that European nations take part in patrols to deter smuggling in the central Mediterranean, Gentiloni said the job of caring for the migrants “remains in one country only” — Italy.

Migrants wait to disembark from the Spanish ship ‘Rio Segura’ in the harbor of Salerno, Italy,  Thursday, June 29, 2017.

Many Italian towns say they just can’t handle hosting hundreds of migrants any more. Right-wing parties remind citizens that Italians themselves are suffering from high unemployment and a practically flat economy.

In one port alone Thursday, in Reggio Calabria, 1,066 migrants disembarked from the Save the Children rescue ship Vos Hestia. Among them were 241 unaccompanied minors.

This ship’s rescued migrants came from Eritrea, Bangladesh, Somalia and several sub-Saharan nations of Africa and included a four-day-old boy. Six migrants had chicken pox and some 250 showed signs of scabies, so officials set up pressurized showers.

From 2015 to 2016, the number of unaccompanied minors doubled to more than 25,000, according to the Interior Ministry.

Populist leader Beppe Grillo, founder of the opposition 5-Star Movement, slammed as a “suicide pact” the accord that lets the European sea patrol off Libya bring all the migrants they rescue to Italy.

There’s also concern that if Italy, a stalwart supporter of the EU, sours on Brussels because it feels abandoned on the migrant issue, the EU’s very survival itself could be compromised.

“Either the Union can shake itself up, or the fear is that it can collapse definitively,” said Francesco Laforgia, a left-leaning lawmaker. 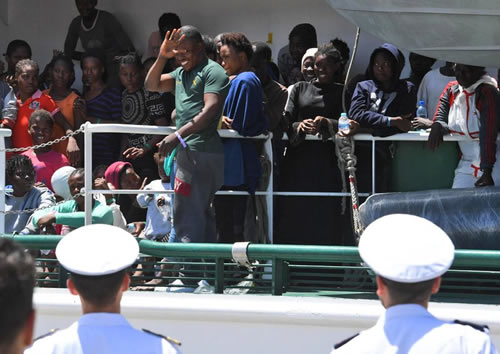 Migrants wait to disembark from the Spanish ship ‘Rio Segura’ in the harbor of Salerno, Italy, Thursday, June 29, 2017. Over 1200 migrants, including children, were rescued while attempting to cross the Mediterranean. The European Union’s foreign minister says the bloc supports Italy’s stance that it can no longer handle the flood of migrants alone, and she insists other EU countries share the burde

“The situation is no long sustainable,” Nicola Latorre, head of the Senate’s defense commission, told the Il Messaggero daily. “Obviously saving human lives remains a priority. But it’s unthinkable that Italy does it all by itself.”

That Italy is considering prohibiting some NGO ships from bringing migrants to southern Italian ports reflects growing frustration in the country toward others in the EU, said Elizabeth Collett, director of MPI Europe, an independent research institution studying migration in Europe.

“What they see is an insufficient willingness of other countries to step up and help out,” Collett said.

One rescue group, SOS Mediterranee, expressed understanding, saying Italy has been “at the front line of this humanitarian tragedy for too long.”

Still, their statement said: “NGOs are not the cause, nor the solution, to this humanitarian crisis but a response to the failure of the European Union to find a common approach to the tragedy.”

Earlier Thursday, EU foreign policy chief Federica Mogherini insisted that other EU countries share the burden of caring for migrants. But previous plans hatched in Brussels to make other EU countries take in a fixed number of migrants from Italy and Greece have largely stalled.

Several central and eastern European EU members — including large countries like Hungary and Poland — have flat out refused to take in a quota of the asylum-seekers.

French President Emmanuel Macron, in Berlin along with Gentiloni, insisted that France would do its part as far as those deserving asylum. But Macron noted that more than 80 percent of the people flowing into Italy from across the sea have been described as economic migrants.

“How to explain to our fellow citizens, to our middle classes, that suddenly there is no limit anymore?” the French leader asked.