ANALYSIS: Was ‘firecrackers game’ in Tehran real or customized?

Meanwhile, the position of Emir of Qatar towards international coalition in the favour of Iranian regime has met with a harsh response from several Arab countries and has led to the severing of diplomatic and trade relations with this country.

On June 7, 2017, ISIS that had nothing to do with Iranian regime for many years, suddenly appeared in Tehran and carried out armed attacks to regime’s parliament building and bombing in the Khomeini tomb, although they are the most secure centres.

Due to the many examples of the same scenarios made by the regime in the past, such as Emam Reza blast and accusation of the opposition groups, Iranian people hardly can believe the regime claims that this is an ISIS attack.

In the social media, Iranians immediately pointed the possibility of a customized scenario made by the regime. People are doubting the regimes media claims mentioning the attacks were accomplished by ISIS, especially because the victims were among the protesting crowds in front of the parliament while all the parliament members remained safe and even they were not aware of this brutal attack during their meetings.

Member of parliament Mahmoud Sadeghi said: “When we were on the floor of the parliament, we even did not hear any voices.

The situation inside the parliament was calm as usual and Mr. Pezeshkian was coordinating the meeting”.

The victims of this attack were among social activists and protestors. Mahdieh Harati was an activist for ending the suffering of the poor children left in the streets of Lorestan province. Hanieh Akbarian was also a teacher protesting for the rights of her colleagues. Seyed Reza Sabeti was a famous soccer player looking for his rights from Abadan. Kamal Mohammad Matori, the relative of Reza, confirmed that he was among the victims as he went there to complain. Also, Mahdieh Harati lost her life in the incident. She had a degree in electrical engineering and teaching from one of the universities in Lorestan. 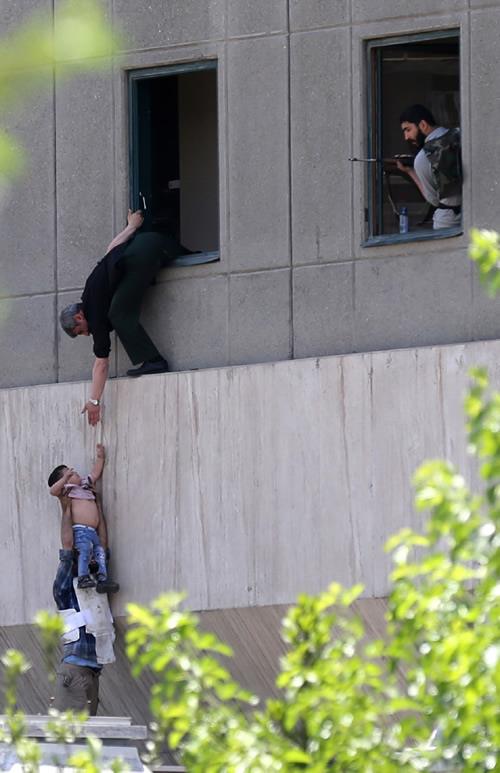 Iranian policemen evacuate a child from the parliament building in Tehran on June 7, 2017 during an attack on the complex.

Many Iranians asked why ISIS attacked protesters and social activists. It has been alleged that protesting teachers were even shot from the front building.

Hassan Rouhani said that the incident was “not surprising.” Khamenei has said that “if Islamic Republic would not stand in the center of intrigue, we would have already had a lot of trouble in this region and inside the country.” “These cracker-games are insignificant and ineffective,” Khamenei said.

The IRGC media called this painful terrorist attack to parliament and Khomeini tomb as “remembering PMOI crimes in 1988” and written that “Now, a decision should be made to act against these terrorists. The judicial and security institutions must arrest these criminals and murderers and take them to the court and execute them.”

IRGC of Iranian regime also accused US and Saudi-Arabia for these terrorist attacks and threatened that “they will revenge any purred blood.”

One of the regime’s newspapers, Amad-News even discussed the benefits of this attack for Khamenei and IRGC. It said that IRGC will receive certain damages as well as benefits from this accident.

This newspaper added that after Trump’s visit to Saudi Arabia and the axis of major Arab countries against Iran, and also sudden discontinuation of relations with Qatar, which was the ally of Iran in the region, Iranian regime needed to be able to deal with this problem by introducing itself as a victim of terrorism. “This attack was somehow helpful in reaching this important goal.”

One of the injured witness of the attack expressed his doubt over the possibility of armed people entering the parliament. He said: “We are not even allowed to bring a pen inside. They told us just take your paper and documents up. How in the legislative field of Baharestan, they came in to Parliament with the gun! There was no police and safety and security equipment.”

Contradiction in the regime dependent media news is very obvious and considerable. The deputy secretary of the Supreme National Security Council said: “the perpetrators of the bombing at Khomeini tomb and shootings in the parliament were Iranian.”

However, some state media like Tabnak, belonging to Mohsen Rezaee who was the former IRGC commander, has announced “it is clear from the accent of these people that certainly they are not Arab-Iranians and for sure they are foreigners.”

There is an inconsistency in the Iranian regime media. Iran Ministry of Intelligence and Security (IMIS) in a statement has disclosed the Iranian identity of 5 people involved in this ISIS terrorist operation. This announcement mentioning five first names added "according to some considerations, the release of their last names is not possible.”

In addition, Iranian regime is claiming that its involvement in war in Syria and Iraq and other places is for protection of its security inside the country. However, if these attacks are not coordinated by IRGC with the hands of ISIS, their claim is questionable.

On the other hand, there is a Facebook page under the name of Serias Sadeghi who is one of the terrorists involved in these attacks. In a report in the website of Kurdish Democratic party (KDP) published on Dec. 3, 2014, this person has been mentioned as one of the ISIS members.

A part of this report is about ISIS activities in the western regions of Iran in which some individuals including Serias Sadeghi are secretly doing propaganda for ISIS hiding from the people eyes. In the beginning of this report ISIS activities are mentioned as a secret issue, but the details of their place have been written and emphasized that Iranian regime is not preventing their “public meetings and activities” in the mosques.

Iranian main opposition organization, PMOI, has immediately reacted to mongering lies of the Iranian regime and rejected some accusations and announced in a statement that “IRGC and IMIS have long history of creating such a scenarios and incidents using the hands of their puppet terrorist groups and then accusation of their opponents (PMOI).” This organization has called ISIS “Firecrackers game” with its “Godfather court” as desirable help for the regime.

On June 7, US president, Donald Trump pointed the bloody attack in Tehran and warned that the countries that support terrorism are jeopardizing themselves with these attacks. Trump mentioned in a statement that “We underscore that states that sponsor terrorism risk falling victim to the evil they promote.”

Ms. Rajavi, the president of resistance council (NRIC) condemned the blood shed of innocent people under any names and said that the attack favours the Iranian regime and Khamenei is welcoming the attacks to get rid of his siege of regional and international isolation.

She added that the first supporter and sponsor of terrorism in the world is Iranian regime that hypocritically wants to change the place of murderer and the victim. She has requested to end the appeasing policies for the favor of Iranian regime and recognizing the Iranian resistance for justice and eradicating the terrorism in the region by blacklisting of the IRGC.

Likewise, the defeat of Khamenei and IRGC in the recent sham elections is necessitating these kind of scenarios in which they can pretend themselves as victim and also intensify the oppressive atmosphere within the society. But this is playing with fire of anger.