Analysis: Why Trump’s trip to Riyadh will mark a new chapter

Patrick W. Ryan, Special to Al Arabiya, 19 May 2017 - Donald J. Trump has established himself as a President of the United States who is not bound by tradition or precedent and his choice for his first international travel destination is consistent with that inclination. While the last five American presidents chose Mexico or Canada for their inaugural trips abroad Trump picked Saudi Arabia as his first foreign stop.

The symbolism of Saudi Arabia as the first country Trump is visiting was intentional, according to a senior White House official who briefed the press, “The reason why we chose the Saudis first is because they are the custodians of the two Holy Mosques.” The official noted, "We thought that was very important because obviously people have tried to portray the president in a certain way, but I think that what he wants to do is solve the same problem that a lot of the leaders in the Islamic world want to do."

The trip is called historic by the White House as Trump will be the first president to visit the homelands and holy sites of the Jewish, Christian and Muslim faiths on one trip. He will travel to Israel, the Vatican, Belgium and Sicily for the G-7 Summit following the two-day Riyadh visit.

In Saudi Arabia Trump is set for meetings with King Salman and senior Saudi officials where he will sign economic and political agreements and bilateral and multilateral meetings with other Gulf Cooperation Council leaders.

Trump will meet with more than 50 leaders from Muslim countries in what is called the Arab-Islamic-American Summit. Discussions will include combating terrorism, boosting commercial relations, youth and technology, per Saudi Foreign Minister Adel Jubeir.

Trump’s National Security Advisor General H.R. McMaster said Trump seeks to encourage Arab and Muslim partners “to take bold, new steps to promote peace and to confront those, from ISIS to al Qaeda to Iran to the Assad regime, who perpetuate chaos and violence that has inflicted so much suffering throughout the Muslim world and beyond.”

Trump will deliver a speech on Islam described by McMaster as “inspiring yet direct” to the Islamic world, a “respectful message that the United States and the entire civilized world expects [America’s] Muslim allies to take a strong stand against radical Islamist ideology.”

An American president addressing the Islamic world is reminiscent of President Barack Obama’s June 2009 speech in Cairo dubbed “A New Beginning.” That title could well be what Saudi officials are looking for as the latter years of the Obama Administration saw a strain in relations between Washington and Riyadh over the Iran nuclear deal and engagement with Tehran, and US policy in the Middle East especially the ouster of President Mubarak in Egypt and inaction over President Assad in Syria. 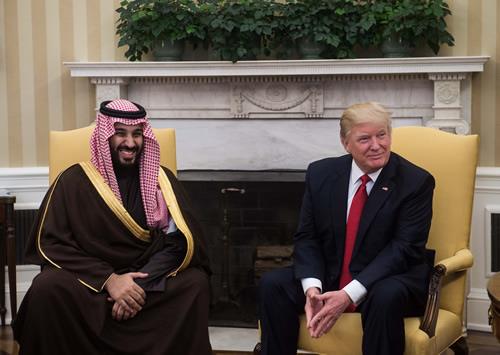 The distinction between Trump and Obama may not be all that sharp when it comes to the nuclear deal after all. During the 2016 presidential campaign Trump said his “number-one priority is to dismantle the disastrous deal with Iran” but this week his Administration waived sanctions on Iran consistent with the nuclear arrangement signaling acceptance of the agreement.

There was no difference with Obama on the Iran deal once he took office, said Colonel David DesRoches, an Associate Professor at the National Defense University in Washington and a specialist on US-Saudi relations. He told the Global Dispatches podcast, “The same policy is being pursued from two ideological perspectives so you can see there probably aren’t any good alternatives out there.”

Trump’s Saudi hosts will not let Trump’s political troubles interfere with their effort to open a new chapter with Washington. NDU’s DesRoches said the political troubles were an inside Washington story as far as Saudi officials were concerned. He said, “Unless you start to see the Trump Administration really ‘taking on water’ they’re going to deal with him as President of the United States and as a president whose policy pronouncements they’re generally in favor of.”

_______________________
Patrick W. Ryan is a Nashville, Tennessee based international affairs analyst. He was a career US Navy officer with extensive Middle East experience and he has published newsletters on Gulf Affairs since 1999.