Agencies, 11 May 2017 - The United Nations still has “a million questions” about a Syria deal struck last week by Russia, Turkey and Iran, with a reported reduction in the fighting but aid convoys remain almost totally stalled, a UN aid official said on Thursday.

“Now Russia and Turkey and Iran explained to us today and yesterday... that they will work very openly, proactively with United Nations and humanitarian partners to implement this agreement,” UN Syria humanitarian adviser Jan Egeland told reporters after a weekly task force.

“We do have a million questions and concerns but I think we don’t have the luxury that some have, of this distant cynicism, and saying it will fail. We need this to succeed.” 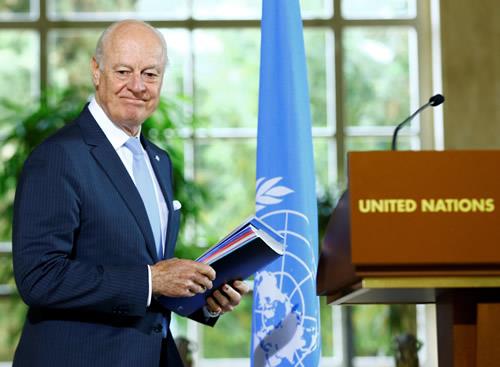 United Nations Special Envoy for Syria Staffan de Mistura attends a news conference at the European headquarters of the UN in Geneva, Switzerland May 11 2017.

The UN Syria envoy Staffan de Mistura meanwhile said a plan crafted by world powers to establish safe zones in the war-battered country should only be seen as an “interim” arrangement and not a precursor to partition.

De Mistura said Thursday that the proposal agreed upon by Russia, Iran and Turkey last week could lead to increased access by aid groups.

But he said the safe zones should not be used as launch pads for new military operations.

De Mistura spoke ahead of a planned resumption of UN-mediated talks between the Syrian government and opposition next week in Geneva.

He said the priority now is to cement ceasefire.

The envoy also said that a deal on Syria prisoner releases has been agreed and negotiation has gone much faster than expected.