Yemen cholera outbreak kills 25 people in a week: WHO

A girl infected with cholera sits on a chair at a hospital in Sanaa, Yemen

Reuters, May 8, 2017- A cholera outbreak in Yemen killed 25 people this week, the World Health Organization said, as two years of war continues to wreak havoc on the impoverished country's health and sanitation system. 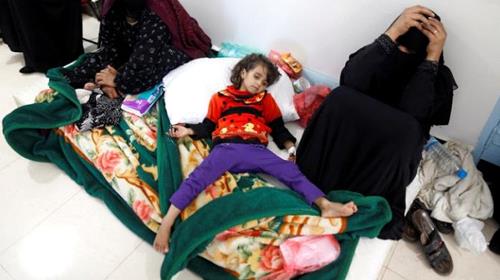 A girl infected with cholera lies on the ground at a hospital in Sanaa, Yemen May 7, 2017. REUTERS/Khaled Abdullah

The deaths from the diarrheal disease which is carried in food and water tainted by human faeces are among 1,360 cases that the United Nations agency reported since April 27.
Some severe cases can kill within hours unless treated with intravenous fluids and antibiotics.

"(This) is extremely alarming. We are facing a reactivation of the cholera epidemic," Nevio Zagaria, the WHO's representative in Yemen, told Reuters.

"The cause is that there is two years of war in Yemen. There is a huge impact on the infrastructure, the electricity power is on and off, the water pumping stations are not functioning regularly and this has an impact on the quality of water."

A previous outbreak subsided last winter, Zagaria said, and the country has experienced a total of around 27,000 cases including 130 deaths during the conflict.

Yemen's conflict pits the Iran-allied Houthi movement and elements of the military against the Saudi-led military coalition backing the internationally recognized government.

Largely stalemated in nationwide battlefronts, the war has plunged millions into poverty, displaced millions of others and killed more than 10,000 people. 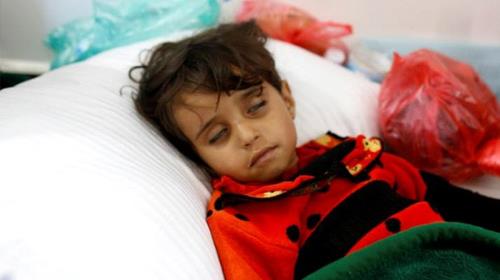 A girl infected with cholera lies on the ground at a hospital in Sanaa, Yemen May 7, 2017. REUTERS/Khaled Abdullah

The U.N. said a child aged under five dies of preventable causes every 10 minutes in Yemen.
A dispute over control of the central bank has also left most public sector salaries in Sanaa and other Houthi-run northern lands unpaid since October.
Street cleaners have gone on strike for their wages, leaving mountains of garbage cluttering main boulevards.
Meanwhile, hospitals are strained by low supplies and cash-strapped staff who in some cases can barely afford transportation to work.
Women and young children, crumpled in pain from the diarrhea, sat on mattress laid in the hallway of a crowded Sanaa hospital.
"I've been lying here since 7:30 in the morning and watching death and suffering. No one came to give me any treatment, not even a needle," lamented patient Ali al-Hamzy.