US warns on sanctions over Venezuela’s move on constitution

CARACAS, AP, May 04, 2017 - Venezuela: The Trump administration is warning that it might impose more sanctions on Venezuelan officials over President Nicolas Maduro’s push to rewrite the constitution amid an escalating political crisis with near-daily demonstrations calling for his ouster.
A US State Department official expressed “deep concerns” Tuesday about the socialist leader’s motivation for calling a constitutional convention as he grapples with widespread anger over Venezuela’s economic struggles.
“What President Maduro is trying to do yet again is trying to change the rules of the game,” said Michael Fitzpatrick, deputy assistant secretary of state for Western Hemisphere affairs. “The actions that were taken yesterday may well give us new reasons for considering additional individualized sanctions.”
Opposition leaders called for a major march Wednesday in Caracas, seeking to keep the heat on Maduro after a month of unrelenting protests. On Tuesday, protesters disrupted traffic in the capital by blocking streets with broken concrete, twisted metal and flaming piles of trash. Police used tear gas to scatter demonstrators as they have almost every day for weeks.
Maduro began the week by signing a decree to begin the process of rewriting Venezuela’s constitution, which was pushed through in 1999 by his predecessor and mentor, the late President Hugo Chavez.
Opposition leaders called the planned constitutional assembly a ploy to keep Maduro and his allies in power by putting off regional elections scheduled for this year and a presidential election that was to be held in 2018. Opinion polls have suggested the socialists would lose both elections badly at a time of widespread anger over triple-digit inflation and shortages of food and other goods. 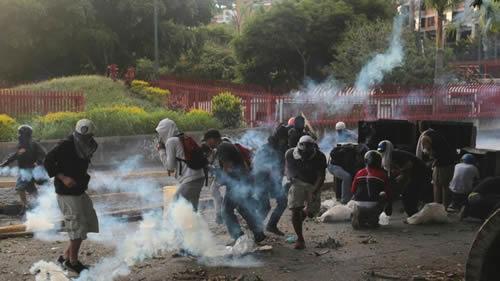 South American governments criticized Maduro’s move in stronger language than they have used so far in condemning the South American country’s crisis, with Brazil calling the decree a “coup.”
Meanwhile, Venezuela’s foreign minister came away empty-handed after seeking support at Tuesday’s meeting of the Community of Latin American and Caribbean States, but the left-leaning regional group did not issue any statement.
Although he has hinted that some members of the constitutional assembly will be chosen by voters, Maduro has given no details on how the body might be picked, and that has led many observers to predict the selection process will favor the socialists.
The president said Tuesday that he hoped the opposition would join in the process of creating a new constitution. 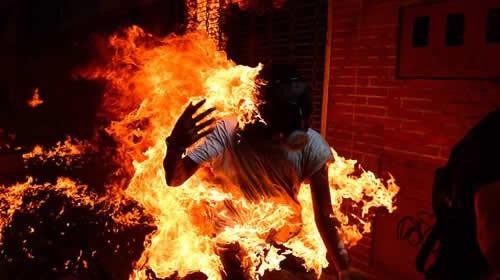 “They don’t realize how lost they are in their violence. I’m extending my hand and asking them to come to the constitutional convention,” he said.
Venezuela’s congress, which has an opposition majority, ignored that Tuesday, officially rejecting the idea of holding a constitutional congress. It said Venezuelan voters should decide whether to call one, though the rejection was a symbolic gesture because congress has no power to block a constitutional assembly.
Venezuela’s constitution was last rewritten in 1999, early in Chavez’s 14-year presidency as he launched a socialist revolution in this oil-exporting nation. Chavez called his new constitution the best in the world, predicting it would last centuries. He carried around a blue pocket-size version of the charter, and would often whip it out and say: “This is our Bible. After the Bible, this.” At the height of his popularity, people mobbed him to ask that he sign their copies. 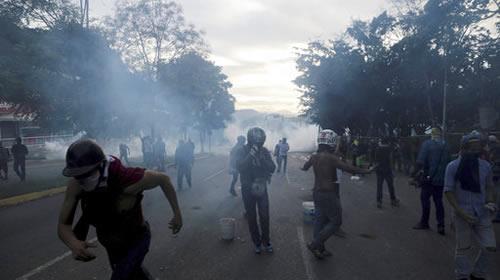 People blocked streets in Caracas with broken concrete, twisted metal and flaming piles of trash to protest the president's bid to rewrite the constitution

At least 29 people have died in the unrest of the past month and hundreds have been injured. On Tuesday, the government suspended for 180 days the right to carry guns. The unrest erupted after an attempt to nullify the powers of the opposition-controlled, but a growing number of people have joined to show their anger over Venezuela’s economic ruin and violent crime.
People manning barricades that choked streets across Caracas on Tuesday vowed to keep protesting until Maduro leaves office.
“Unlike some of these young people, I remember a time before the socialists. Now is not the time for fear,” said Ricardo Herrera, a 36-year-old chauffeur who was piling trash and pieces of concrete into a street barricade in front of his apartment building.
Herrera said he had sat out the protests because he had to work, but decided after Maduro’s call for a new constitution that he could no longer stand by.
“No one is going to work today. If we back down now, we’ll be under their boot for the rest of our lives,” he said.