Emmanuel Macron, frontrunner to become Frances next president, set up his En Marche! movement just a year ago

AFP, April 24, 2017 - French President Francois Hollande on Monday urged voters to reject far-right leader Marine Le Pen in next month's presidential runoff against pro-EU candidate Emmanuel Macron.
Macron is the clear favourite to become France's youngest-ever president after topping Sunday's first round of voting with 24.01 percent of votes, ahead of National Front (FN) leader Le Pen on 21.3 percent, according to final results.
The vote revealed a country deeply divided, with 39-year-old Macron, an advocate of open borders and free trade, leading the vote in cities and Le Pen topping the polls in rural areas that feel left behind by globalisation.
In a solemn address to voters, Hollande warned of the "risk for our country" of a far-right victory and said he himself would vote for Macron, who served as his economy minister for two years.
The Socialist president joined a long line of politicians urging voters to back Macron in order to thwart the anti-immigration, anti-EU Le Pen.
Le Pen seized on the flurry of endorsements for Macron from the ruling Socialists and main opposition Republicans -- both of which crashed out in the first round -- as proof he was the choice of a discredited old guard.
Visiting a market in the northern town of Rouvroy on Monday, 48-year-old Le Pen lashed out at the "rotten old republican front" -- the ad-hoc anti-FN coalition formed by mainstream parties whenever the party is at the gates of power. 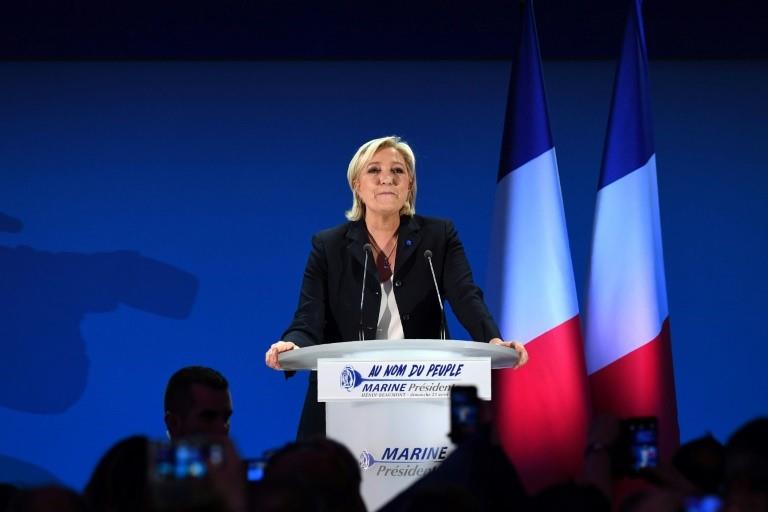 "I've come here to start the second round campaign in the only way I know -- on the ground with the French people," she said.
She later told France 2 television: "Nothing in either Mr Macron's policies or his behaviour suggests the slightest proof of love for France," and insisted, "We are going to win."
Le Pen also said she was setting party affairs to one side in order to concentrate on the campaign.
"I will feel freer, I will be above partisan considerations, it's an important act," Le Pen said.
Macron received several congratulatory calls on Monday from European leaders relieved to find him in pole position.
Thanking Hollande in a tweet for his support, the former investment banker called on the French to "remain true to France's values" in the May 7 runoff.
He and Le Pen will take part in a TV debate on May 3.

Sunday's results were a stunning blow to France's traditional political class, with voters fleeing the ruling Socialists and conservative Republicans who have governed for the past half-century.
Both Macron and Le Pen campaigned as rebels who transcended the left-right divide.
Republicans candidate Francois Fillon was seen as the favourite until January when his campaign was torpedoed by allegations that he gave his British-born wife and two of his children fictitious jobs as parliamentary assistants.
In the end, Fillon trailed in third with 20.01 percent, ahead of radical left candidate Jean-Luc Melenchon on 19.58 percent.
On Monday, Fillon told the party's top brass he lacked "the legitimacy" to lead them into parliamentary elections in June.
"I need to rethink my life and heal my family's wounds," he told them, according to a statement.
Fillon and fifth-placed Socialist candidate Benoit Hamon have both rallied behind Macron.
Melenchon pointedly avoided backing the centrist and the leaders of the Republicans party failed to agree on whether to endorse Macron openly or simply urge supporters not to vote for Le Pen.
But parties are also concerned about what happens beyond the presidential election -- a legislative vote looms in June.

Addressing thousands of flag-waving supporters in Paris on Sunday evening, Macron said he aimed to unite "patriots" against "the threat of nationalists".
Le Pen, who has been hoping to emulate Donald Trump's victory in the US, said the French faced a choice between "runaway globalisation" and a protectionist France.
Her plans to restore France's borders with its European neighbours, pull out of the eurozone and hold a referendum on leaving the EU had sown fear of another devastating blow to the bloc after Britain's vote to leave. 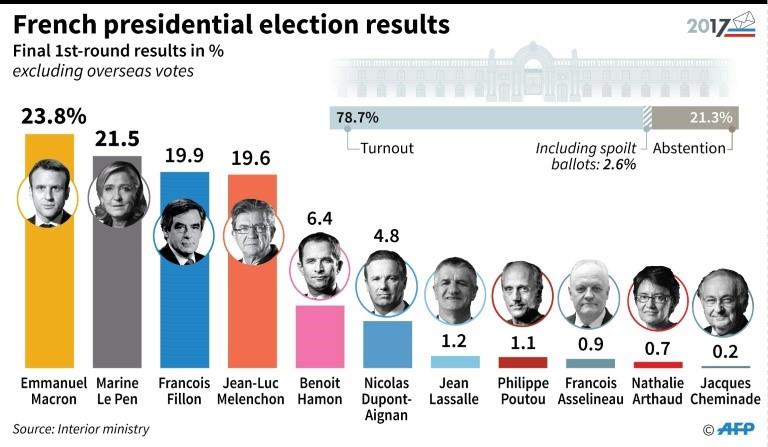