ANALYSIS: Is there anything Iran’s presidential election can change?

Al Arabiya, 24 April 2017 - The US is said to be weighing a variety of different approaches on the regime ruling Iran after the upcoming May 19 presidential election.

This line of thought argues any punishing measure by the US now would support “hardliners” against “moderates”. The problem is that any such distinction of Iran’s political landscape is entirely incorrect.

The regime in Iran does not, to say the least, has the best interest of Iranians or people across the region at heart, let alone other nations throughout the planet. The argument of how the West’s actions may affect Iran’s elections fails to understand what Iranian Supreme Leader Ali Khamenei and his surrogates have in their playbooks.

In the elections, all candidates are vetted by a 12-cleric member Guardian Council body, effectively appointed directly and indirectly by Khamenei, as seen last Thursday. The list has now been trimmed to six candidates.

A first glance indicates the remaining four will most probably step aside eventually in favor of Rowhani and Raisi.

Iran’s elections do not have any impact on domestic or foreign policy. In internal issues, the hallmark “moderate” Rouhani and former president Mohammad Khatami – also dubbed “moderate” and president from 1997 to 2005 – only increased domestic crackdown, including arrests, tortures and executions.

In the past four years, Rowhani has presided over nearly 3,000 executions – far more than his firebrand predecessor, Mahmoud Ahmadinejad.

On foreign policy, never has there been the slightest difference in the regime’s eagerness to advance its nuclear program. Most recently, Rowhani made remarks signaling a shocking contrast to other Iranian officials: he boasted of the highly flawed Iran nuclear deal.

“Nuclear technology is a dire necessity for us, and that is exactly why [Khamenei] constantly underscores the need to continue developing this technology,” he said according to the semi-official ISNA news agency. Rowhani also boasted how his cabinet increased the defense budget.

“Statistics show [this] government has increased the defense budget by 145 percent... It is the pride of [this] government that the steps taken forward in providing strategic equipment and assets for the armed forces in the past 3½ years have matched those of the past 10 years,” he explained.

Rowhani is also known for his close relationship with the regime’s founder, Ruhollah Khomeini, dating back to 1979, while his main opponent, Raisi, spent the past three decades easily climbing up the regime’s ranks for his role in the judiciary, and sending dissidents to the gallows without any hesitation.

Raisi is most famously known for his membership in the notorious “Death Commission,” tasked to carry out Khomeini’s fatwa leading to the summer of 1988 massacre that left more than 30,000 political prisoners dead in the span of a few months. Most of the victims were members and supporters of the Iranian opposition People’s Mojahedin Organization of Iran (PMOI/MEK). 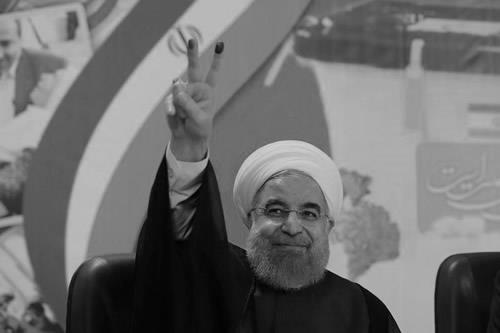 In the past four years, Rowhani has presided over nearly 3,000 executions – far more than his firebrand predecessor, Mahmoud Ahmadinejad. (Reuters)

A slate of wrongs

It would be a grave mistake for the US, and the West in general, to preemptively limit their available options on the theoretical basis of enjoying influence in the internal election, let alone its outcome, of a regime such as Iran.

A more critical mistake is constantly made by Western media, which tends to be easily misled over the scope of existing political opinions in Iran. The mere fact that Rouhani is embattled does not make him the ideal candidate for the West. A reflexive reaction in the West seems to be that if Raisi is worse, then let’s support Rowhani.

Whoever ends up becoming Iran’s next president, is – and has to be, for his own safety, politically and otherwise – absolutely in line with the supreme leader, and the radical direction of the Iranian regime in its entirety.

The mere assumption that potential US actions might be considered a major factor in Iran’s presidential election simply fails to comprehend the true nature of Iran’s political establishment, loyal only to the views of Khomeini. There is no representation by true liberals in Iran today, and nor should there be any such expectations in the future.

Even if the rivalry between Rowhani and Raisi ends with the “moderate” Rowhani gaining a second term, it changes absolutely nothing. Rowhani has been, and has to be, in service to Khamenei’s policies. Rowhani advanced the supreme leader’s nuclear policy after he blessed the nuclear talks back in 2012, prior to Rouhani’s presidency.

He supported Iran’s involvement in Syria and all the proxy militias in Iraq, Yemen, Bahrain and Libya, parallel to supervising increasing human rights violations.

Iran’s presidential election is nothing but a game we witness every four years. The president has no true role in running the country, other than to implement the supreme leader’s policies. Khamenei, the Supreme Leader, has the final say on all national security and foreign policy issues, while enjoying full, unrivaled supremacy.

Khamenei even has the authority, under the regime’s so-called constitution, to veto and dismiss all powers provided to the president. The difference we will witness in Iran’s approach to domestic and international affairs will be zero. That is exactly why designating the Islamic Revolutionary Guards Corps (IRGC) as a foreign terrorist organization should not be delayed for any reason – especially Iran’s presidential election.

According to The Daily Beast the IRGC “are Iran’s most important security, military, and political institution, with financial interests in most areas of the state’s economy. Its Quds Force, which is in charge of global operations, was officially designated as a terrorist entity by the US Treasury Department in 2007. Hezbollah was designated in 1997.”

It is now time to target the main root of the Middle East’s crises.