CARACAS, Reuters,  Apr 19, 2017 - Venezuelan security forces fired tear gas as demonstrators staged what they billed as the "mother of all marches" against President Nicolas Maduro on Wednesday, and a student caught up in a clash died after being shot in the head.

Opposition supporters protested in Caracas and other cities, denouncing Maduro for eroding democracy and plunging the economy into chaos. Crowds swelled to hundreds of thousands, including Maduro supporters who held a counter-demonstration in the capital at the urging of the president.

The dueling marches drew parallels to the clashes between pro and anti-government protesters in 2002 that triggered a brief coup against late president Hugo Chavez.

Carlos Moreno, 18, a student, was on his way to play soccer in Caracas and did not plan to take part in the demonstration when government supporters approached an opposition gathering and fired shots, according to witnesses and a family member. Moreno was shot in the head, they said. 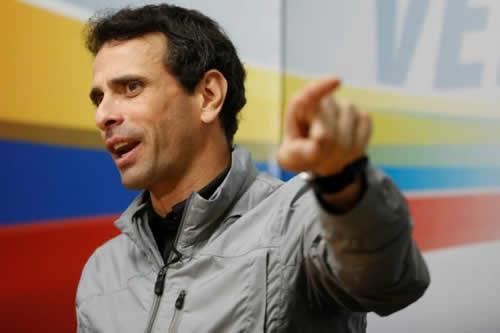 Venezuelan opposition leader and Governor of Miranda state Henrique Capriles speaks during an interview with Reuters in Caracas, Venezuela April 18, 2017.

Waving the country's red yellow and blue flags and shouting "No more dictatorship" and "Maduro out," demonstrators clogged a stretch of the main highway in Caracas. Troops fired tear gas in Caracas neighborhoods and in the border city of San Cristobal.

"We have to protest because this country is dying of hunger said Alexis Mendoza, a 53-year-old administrator marching in the Caracas neighborhood of El Paraiso. "There are a lot of people in the opposition and they are full of courage." 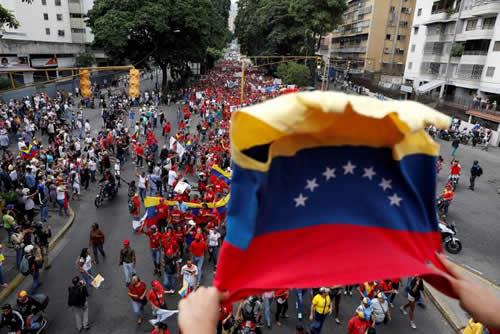 Supporters (in red) of Venezuela's President Nicolas Maduro march in front of opposition supporters during the so-called 'mother of all marches' against Maduro in Caracas, Venezuela April 19, 2017.

The protest followed a fortnight of violent protests, in which five people have been killed, triggered by a Supreme Court decision in March to assume the powers of the opposition-led Congress - which it quickly reversed under international pressure.

The court's move nonetheless fueled long-simmering anger over the ruling Socialist Party's handling of the economy. The oil-exporting country suffers from Soviet-style shortages of food and consumer goods and triple-digit inflation.

The opposition is demanding a timeline for delayed elections, a halt a security crackdown on protests, and respect for the autonomy of the opposition-led legislature. 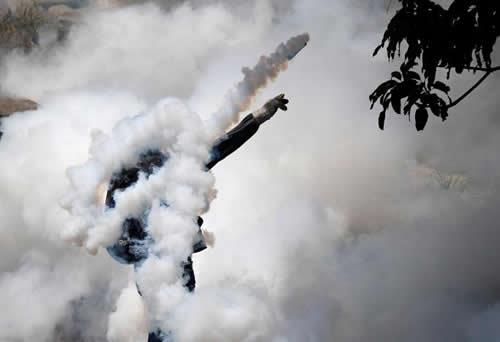 A demonstrator throws back a tear gas grenade while clashing with riot police during the so-called 'mother of all marches' against Venezuela's President Nicolas Maduro in Caracas, Venezuela April 19, 2017.

Maduro says recent protests have been little more than opposition efforts to foment violence and topple his government.

Moreno, the student hit by gunfire, died in a clinic after undergoing surgery, according to three security officials who asked not to be identified.

"There was an exchange of words, the situation got complicated and, well, they shot the guy," said Arhiam Cano, a graphic designer who witnessed the event, in a telephone interview. "When they took the young man to (a nearby clinic), the government supporters left."

An employee of the clinic said the man was undergoing surgery, without giving details. Venezuela's Information Ministry did not respond to an email seeking details.

The marchers gathered at more than two dozen points around Caracas and hoped to converge on the office of the state ombudsman, a guarantor of human rights.

Previous efforts to march there have been blocked by the National Guard. In many cases protests have ended with youths throwing rocks squaring off against security forces spraying tear gas in melees that have dragged on well into the evening. 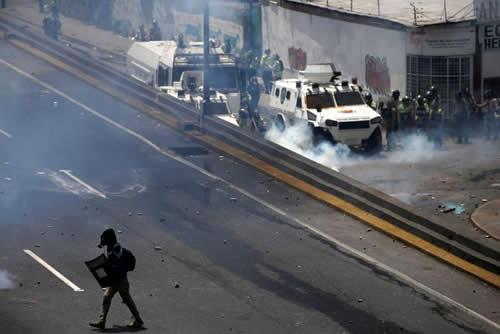 A demonstrator walks on as riot police officers take position near him during the so-called 'mother of all marches' against Venezuela's President Nicolas Maduro in Caracas, Venezuela April 19, 2017.

Maduro has charged that the opposition is trying to relive the 2002 coup against Chavez, his predecessor and mentor. Analysts say there is less likelihood of a putsch against Maduro because Chavez launched a broad purge of the armed forces following his brief ouster.

Socialist Party officials dismiss the opposition marches as efforts to destabilize the government, pointing to barricades of burning trash mounted by protesters and vandalism of public property. 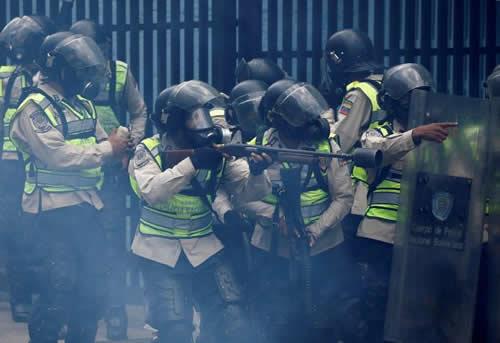 Riot police officers take position while clashing with demonstrators during the so-called 'mother of all marches' against Venezuela's President Nicolas Maduro in Caracas, Venezuela April 19, 2017.

"They've got the right to march but marching isn't burning stuff, throwing rocks," said Jahil Marcano, a 48-year-old construction worker who had joined the pro-government rally. "They view us Chavistas with hatred."

Venezuela benefited for years from oil-fueled consumption and many poor citizens rose into the middle class. But the 2014 collapse in oil prices left the government unable to maintain a complex system of subsidies and price controls. Snaking grocery lines are now a common sight and people routinely say they skip meals and cannot find basic medication. 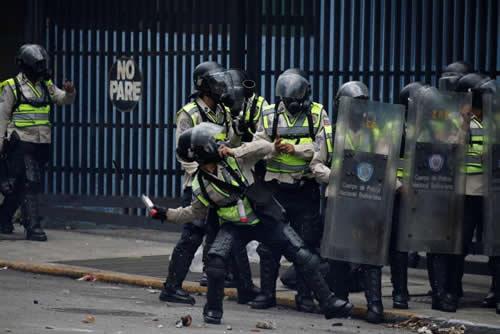 Riot police officers take position while clashing with demonstrators during the so-called 'mother of all marches' against Venezuela's President Nicolas Maduro in Caracas, Venezuela April 19, 2017.

Further spurring outrage was a decision by the national comptroller's office earlier this month to disqualify opposition leader and two-time presidential candidate Henrique Capriles from holding office for 15 years, dashing his hopes for the presidency.

The elections council, which is sympathetic to the government, has delayed votes for state governors that were supposed to take place last year. The opposition charges that this is because the Socialist Party would be likely to fare poorly in such a vote. 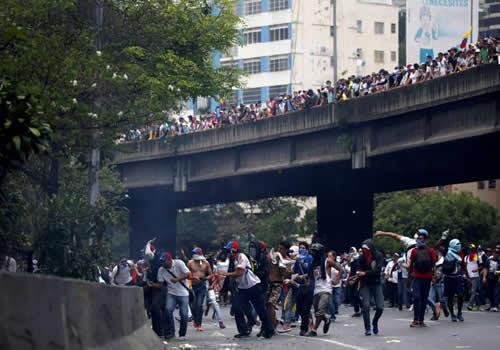 Demonstrators take cover while clashing with riot police during the so-called 'mother of all marches' against Venezuela's President Nicolas Maduro in Caracas, Venezuela April 19, 2017.

Eleven Latin American countries issued a joint statement this week calling on authorities to set a time frame for elections to "allow for a quick solution to the crisis that Venezuela is living through."

Demonstrators also gathered on Wednesday in the eastern city of Puerto Ordaz, home to Venezuela's struggling state-run mining companies, and in the border city of San Cristobal and the oil city of Maracaibo.

"I've just graduated ... and what I've got in the bank isn't enough for a bottle of cooking oil," said Gregorio Mendoza, a 23 -year-old engineer in Puerto Ordaz. "We're poorer every day." 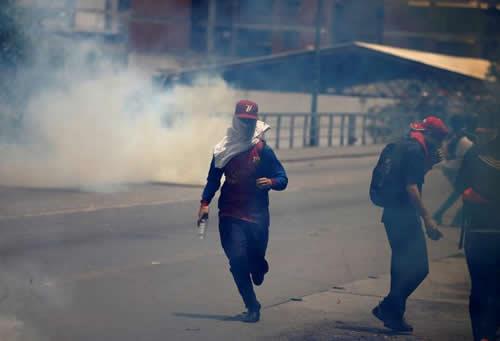 Demonstrators clash with riot police during the so-called 'mother of all marches' against Venezuela's President Nicolas Maduro in Caracas.