Staff writer, Al Arabiya, 7 April 2017 - The Gulf Cooperation Council has expressed its support of the US air strikes on military targets in Syria in retaliation for a suspected chemical weapons attack on a rebel-held town that killed scores of civilians.

The council’s secretary general of the Gulf Cooperation Council Abdullatif bin Rashid Al Zayani said in a statement that the Gulf the US strikes at the Shayrat airfield in Homs province will force the regime of Syrian President Bashar al-Assad to halt indiscriminate attacks on his civilians and breaking international law, including the use of banned chemical weapons, in doing so.

The Pentagon said 59 Tomahawk cruise missiles were fired from two warships at the base from where US officials believe Tuesday’s attack in Khan Sheikhoun had been launched.

Al Zayani expressed the support of the GCC countries for US President Donald Trump’s vision aimed at ending the chaos, killing and destruction in the Middle East and combating terrorism in order to restore stability and security to the region and end the suffering of its people.

He pointed out that the firmness shown by the current American administration to reach political solutions to the regions’ crises and to alleviate the suffering of refugees and displaced persons by the attacks of the Syrian regime. 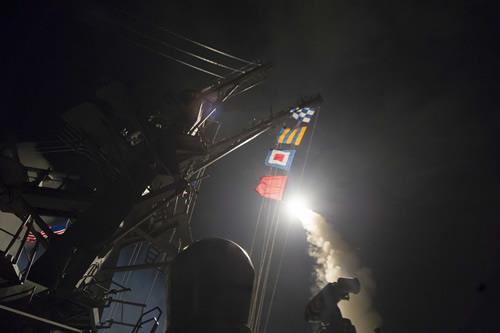 In this image released by the US Navy, the USS Ross fires a tomahawk land attack missile April 7, 2017, at a Syrian air force airfield.