As Syria war rages on, civilians the first casualty

London, Reuters, 15 March 2017 - The Syrian war started six years ago with protests across the country against the rule of President Bashar al-Assad and his family’s 40-year rule.

“Arab Spring” protests sweeping the region had already dislodged autocrats in Tunisia and Egypt, and would later claim the long-term rulers of Libya and Yemen, two other countries still embroiled in civil wars six years on.

Assad responded to Syria’s protests with unconstrained violence, turning the uprising into a war to the death.

An estimated half a million people have been killed, half the population has been uprooted in the world’s biggest refugee crisis, and the war has set new standards of savagery in its impact on civilians.

Here are some facts on the humanitarian impact of the conflict:

Death toll
* About half a million people are estimated to have been killed since the conflict began. The Syrian Observatory for Human Rights, a Britain-based war monitor, said on Monday there are about 465,000 people killed and missing in the war. Among those killed are more than 96,000 civilians.

* At least 652 children were killed last year, up by 20 percent from 2015, the UNICEF, UN’s children agency said. The figures - collected since 2014 - only represent formally verified casualties, meaning the true toll could be higher.

Refugees and displaced
* There are currently almost five million registered Syrian refugees. Most of them are living in neighboring countries such as Turkey, Jordan and Lebanon.

* Altogether, the number of refugees and displaced people means that half of the Syrian population, which stood at 22 million before the start of the conflict, have fled their homes.

* In Europe, a little under a million Syrians have applied for asylum, with Germany and Sweden receiving two-thirds of applications.

* Around five million people remain trapped in areas of active fighting, including nearly one million trapped in besieged areas inside Syria with almost no aid. 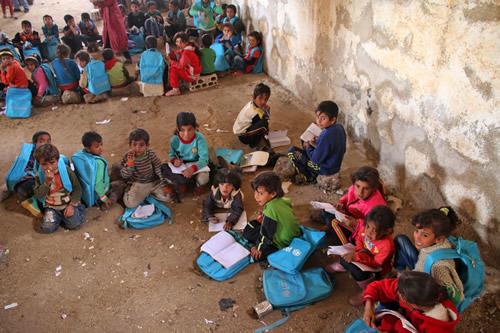 Syrian children sit during class a barn that has been converted into a makeshift school to teach internally displaced children from areas under government control, in a rebel-held area of Daraa, in southern Syria on November 10, 2016. (File photo)

* One third of the schools in Syria have been destroyed or damaged by over 4,000 attacks on schools and education facilities. Hundreds of thousands of teachers have fled the country.

* As a result, 1.75 million children and young people do not attend classes, and mathematics and reading skills are falling far behind pre-war levels.

Health
* At least 814 medical personnel were killed between March 2011 and February 2017. These figures may be underestimated due to difficulties in gathering evidence, researchers say.

* 2016 was the most dangerous year for health workers in Syria, with multiple attacks including killings, imprisonment, abduction and torture.

* There were almost 200 attacks on health centers last year alone.