Al Arabiya News Channel, 8 March 2017 - On the May 13, 2016, Lebanese people were surprised when the Hezbollah’s leading man Hassan Nasrallah was seen mourning the death of his most senior militia commander Mustafa Badreddine.

No sooner did the news of Badreddine demise in Syria broke out, the Lebanese media adopted the story perpetuated by Hezbollah on the circumstances surrounding his death. Still, a few days later, questions began to rise about the credibility of Hezbollah’s version of events.

After investigations into the story, evidence proved that Badreddine did not die fighting in the battlefields of Syria as claimed, but rather, the Hezbollah militia commander was assassinated. And the person responsible for his assassination was none other but his revered leader and friend, Hassan Nasrallah.

Events leading up to May 12
In 2013, Hezbollah was summoned to fight in Syria and Nasrallah commissioned Badreddine to lead the factions there alongside Iran’s Qassem Soleimani who led Quds Force, a branch of Iran’s Revolutionary Guard Corps (IRGC).

Soleimani ignored Badreddine’s great experience and aspired to lead the entire battle all by himself. While Badreddine took one risk after the other in the battlefields, leading his soldiers to victories and assuming full responsibility for the losses, he discovered that Soleimani was favoring the lives of the revolutionary guards over those of Hezbollah. The former asked the latter to lead his soldiers himself and take full responsibility over his army. 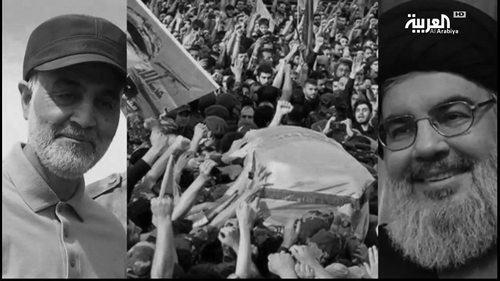 Both Hassan Nasrallah and Qassem Soleimani are said to have a hand behind Mustafa Badreddine mysterious death.

While Badreddine was fighting with his army in Syria, he was tried in absentia at the International Tribunal in the case of the assassination Rafiq Hariri, former Prime Minister of Lebanon in 2005. Nasrallah has been under a huge pressure from Soleimani, who requested the removal of Badreddine from the battlefield. Consequently, it appears that he had schemed to get rid of the commander.

The question then begs: What really happened on the evening of May 12, 2016? How did Soleimani and Nasrallah arrange the assassination of Mustafa Badreddine? And what really happened near the Damascus International Airport on the night between the May 12-13, 2016?

Aftermath
On May 14, 2016, less than two days after the operation, Al-Akhbar newspaper published the results of the investigation. Badreddine was reported to have arrived to the international airport was reportedly accompanied to the meeting with three other people but was the only one who was killed.

The cause of his death was assumed to be a vacuum bomb, while the nearest fighter group was 12 km away from the Damascus airport, which places it in the range of the artillery. Yet, these groups usually used unguided shells for their operations.

However, no gun powder residue found at the scene.

Infographic: Who was Hezbollah’s Mustafa Badreddine? 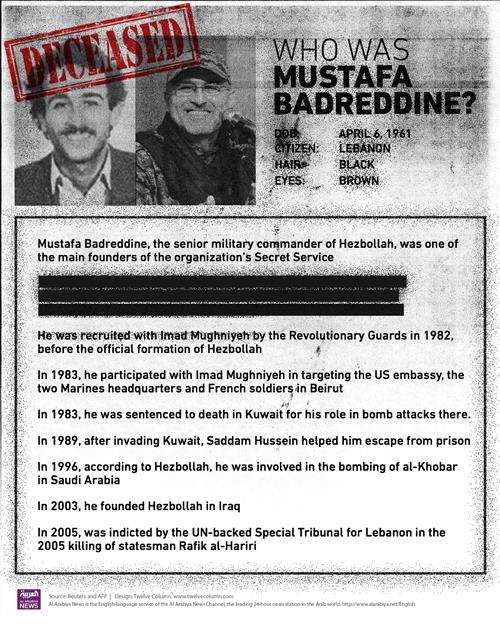 Nicholas Blanford, a nonresident senior fellow with the Middle East Peace and Security Initiative, recently wrote an analysis on that point.

“The one claim of responsibility from the rebels came from the Jaysh al-Sunna group which said it had killed Badreddine in Khan Touman in southern Aleppo province. If that were true, why would Hezbollah hide it and make up a story about “takfiris” killing Badreddine much further south in the Damascus airport area?” Blanford asked.

“Also it is unclear what weapon system would be in the hands of rebel groups in the vicinity of Damascus airport that could account for the “large explosion” that Hezbollah said on Friday killed Badreddine. Diplomatic sources in Beirut confirmed that there really was a powerful blast near Damascus airport on Thursday (May 12) even if its origin remains unknown,” Blanford added.

“As I was approaching to go to work, I saw a lot of people crowding near the airport. At approximately 10 PM that night we suddenly heard a loud bang and what sounded like fire from three rifles,” the airport employee told Al Arabiya.

“We tried approaching the scene to see what was going on but we were stopped by Hezbollah fighters telling us we weren’t allowed to enter. They did not even allow Syrian senior army officer or the Syrian police from entering the airport,” he said. 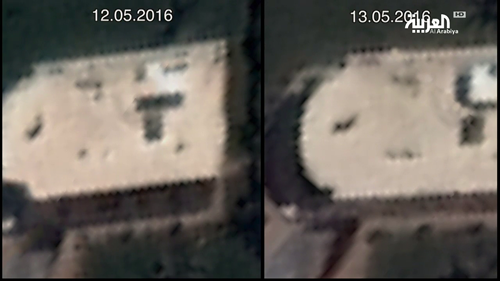 Al Arabiya also obtained images of the site where Mustafa Badreddine was killed which revealed aerial views of the exact scene on May 12 and May 14, both photos showing the site unscathed.

On the same say, the Shiite cleric Abbas Hoteit declared to the south Lebanon website Janoubia that “Badreddine was killed by two treacherous bullets”.

Evidence and eyewitness accounts suggested that four people met at the security building near the Damascus airport that night, one of them being Badreddine himself. The identity of the second person was discovered immediately after the operation on Twitter when a number of people reported they saw Soleimani leaving the site minutes before the operation. The third person was Badreddine’s bodyguard, who could not save his commander’s life.

According to eyewitnesses, the fourth person identified was Ibrahim Hussein Jezzini, a person who Badreddine reportedly trusted the most.

Badreddine’s death was seen as a victory for those affected by his involvement in attacks dating back to the 1980s, reportedly including the deadly suicide truck bombing attack that left over 200 US soldiers dead in Beirut in 1983 as well as the bombings targeting the French and US embassies in Kuwait the same year.